Recipes for Kwanzaa, risotto for New Year’s Eve and more. 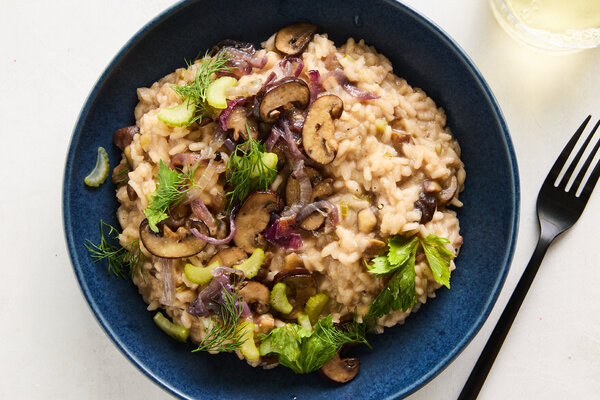 Today is the first day of Kwanzaa, which lasts until Jan. 1. If you’re celebrating and in need of menu suggestions, we put together dozens of excellent dishes that could fill your table, including Millie Peartree’s stewed collard greens, simmered until melting with smoked turkey or pork neck bones, and Maati Kheprimeni Angaza’s festively frosted vegan doughnuts.

That pot of collards would also be apropos for New Year’s Day, when serving greens and black-eyed peas is traditional across the Southern United States, for a meal closely connected to African American culture. It’s a feast sure to cure whatever ails you after the merriment of New Year’s Eve.

And how do you plan to make merry that night? You could take a cue from Eric Kim and throw a risotto party.

“Risotto is not as hard as people make it out to be,” he writes in his column for The New York Times that accompanies his recipe for chestnut risotto (above) with roasted mushrooms and red onions. Stirring every three to five minutes, he advises, is enough to keep the bottom from burning but frees you up to do other things in the kitchen — perhaps putting the finishing touches on his cream cheese poundcake. It’s baked as a sheet-cake and iced with whipped cream and a shower of lipstick-pink freeze-dried raspberries, truly resplendent to behold.

But New Year’s Eve is almost a week away, so what are you hungry for in the meantime? I love the look of Yotam Ottolenghi’s butternut squash pie with leeks and za’atar, which would make a truly special vegetarian main course. You could round it out with his spinach salad with dates and almonds (a recipe from “Jerusalem,” the book he and Sami Tamimi published in 2012) and maybe a few fillets of Sam Sifton’s roasted salmon with brown sugar and mustard, if you have pescatarians at the table.

And finally, my favorite course: dessert! If you have finished all your holiday cookies, you might be ready to bake some more. I’m excited to try Dorie Greenspan’s inspired lemon meringue cookies, which resemble adorable miniature pies. Cookie-adjacent are Scott Loitsch’s easy and extremely fun brown butter Rice Krispie treats.

You’ll need a subscription for the recipes. If you’ve wondered whether subscribing is worth it, it is! And subscribing supports our work in bringing you dozens of new recipes every month, in addition to the thousands already available. Even without a subscription, you can also find us on YouTube, TikTok and Instagram, where our own Vaughn Vreeland makes cherry yum-yum — his grandmother’s heirloom recipe with a few modern tweaks.

Now, as we close out 2022, fans of the author Colette might remember it as the year that “Chéri” and “The End of Chéri” were finally given not just one but two long-overdue new translations into English! I discovered Colette in college and never let her go, because, as Jenny Turner shows in this lovely profile for The London Review of Books, Colette knows exactly how close the stomach is to the heart. A woman tells her ailing husband, “You look like a badly frosted cake!” The novels’ main character Léa, tiring of her lover, tells him, “Right now, you strike me as the type that leaves a box of cakes on the hall table on his way in … and picks it up again on his way out.”

See you on Wednesday.