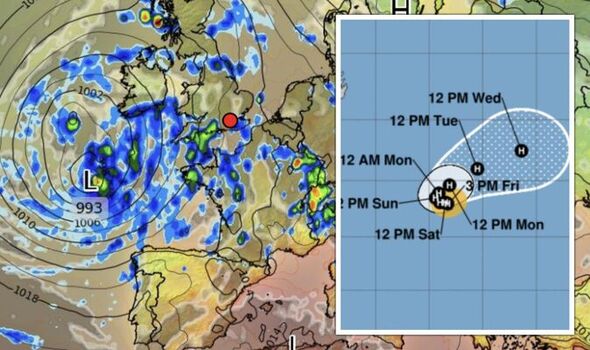 The first in a line of low-pressure systems will target Britain this weekend as it heads in, churning like a ‘washing machine’. The deluge will build next week as storm systems join forces before the Atlantic hurls an ex-tropical hurricane our way. The remnants of Hurricane Danielle heading eastwards off the coast of America shows signs of making a beeline for the UK.

Met Office meteorologist Alex Deakin said: “The seasons are about to change and so is the weather, with good news if you are after some rainfall as it looks like there will be plenty of that next week.

“This weekend we have low pressure dominating, and it is going to sit around for several days bringing spells of wet and windy conditions.

“There is a cold front moving in, and they merge together to form a static area of low pressure like a washing machine.

“It will throw bands of showers across the UK increasingly through the weekend and into the early part of next week.”

The autumnal assault will deliver its first blow this weekend before a separate storm system hits on Monday.

A further ‘intense’ low-pressure cyclone spinning near Spain could add to the misery later in the week, Mr Deakin warned. 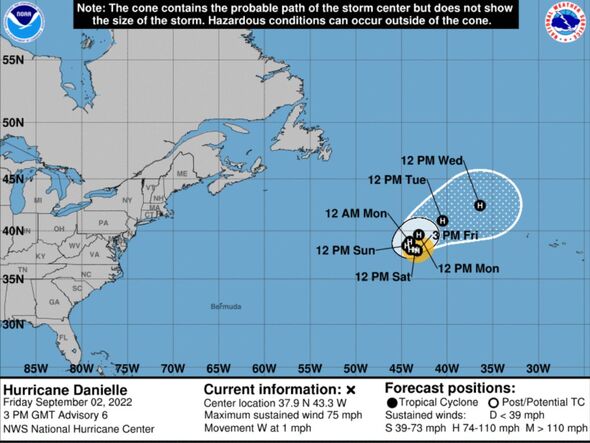 He said: “It is looking pretty wet for all of us into the weekend.

“Another low joins in after the weekend and keeps us under the influence of low pressure on Monday and Tuesday and probably beyond.

“There is a much more intense area of low pressure potentially drifting up towards Spain and maybe a little further north beyond that, but this is a little way ahead, but this has some tropical origin in it.”

Meteorologists insist Hurricane Danielle will weaken over the Atlantic, and only its remnants–energy and warm air it has accumulated during its cycle–will drift towards western Europe.

This would, however, bring a spell of wet and windy weather next week and potentially whip up large coastal waves. 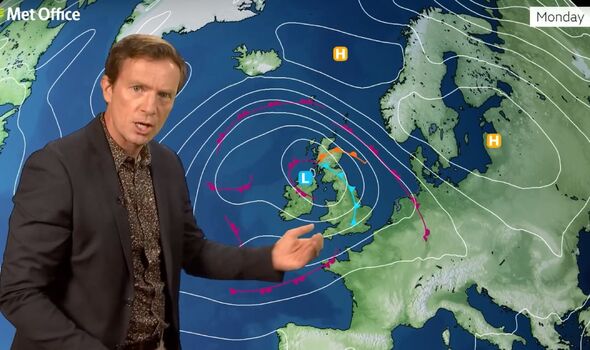 Netweather forecaster Jo Farrow said: “It is starting well far north as a hurricane, but it might re-curve towards southern Greenland or its remnants head towards western Europe which would bring wet and windy weather to the UK.

“If the remnant low did head towards the Brest Peninsula or southwest Britain, it would bring large waves and swell which would coincide with the following weekend’s Spring Tides.

“There is still plenty of uncertainty.”

Northern Ireland and southwestern Scotland will get the heaviest rain today before northeast Scotland falls into the firing line tomorrow, he added.

Heavy downpours and unstable conditions coming in from the Atlantic this weekend could trigger thunderstorms.

Western and northern regions will bear the brunt of any storm activity through the coming days. 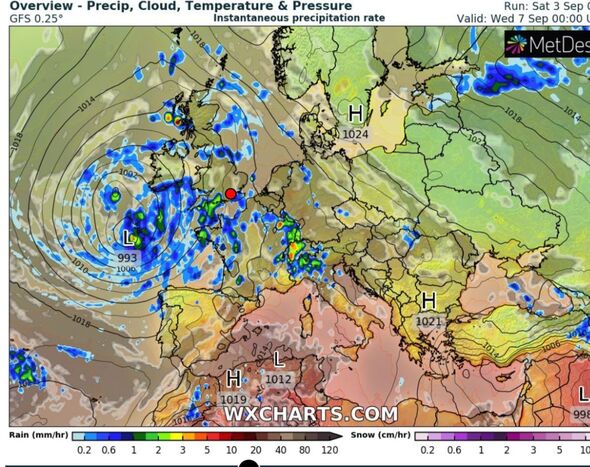 Jim Dale, meteorologist for British Weather Services, said: “A low-pressure system over the UK will take a while to fill and this will bring unsettled conditions.

“There will be some thunderstorms to the west of the country and we will be chasing bands of rain.

“The further west and north you are, the more there will be in the way of precipitation.”

Wet weather will bring hopes of an imminent end to the drought crisis, although this is still a way off, warned Mr Dale author of Weather Or Not?

Persistent rain will, however, dampen soil and through the next three months replenish water reserves, he explained.

He said: “There has not been a drought in history that has not been made up for in the following autumn and winter, and this will be no different.

“It will start to unwind through the next couple of months as wetter weather sets in and we see more in the way of persistent rainfall which will replenish reserves.”