BBC Weather: Temperature 'could get warmer' into next weekend

Temperatures are expected to rise in the UK throughout the coming week, with pleasant weather predicted for most of the country, particularly in south-east England. But prediction models for the week after – starting Monday, July 11 – show thermometers on an unprecedented hike. A forecast model brought to light by The Weather Outlook predicted a possible temperature of 40C at Bristol on July 14, at 6pm.

Meteorologists describe this as a “historic moment”.

On the same map, similarly high temperatures of 39C and 38C degrees were predicted for the south of England – in cities including Oxford and Southampton.

Another map from the same model also showed high temperatures with a peak of 40C degrees closer to London expected on July 16, at 6pm. 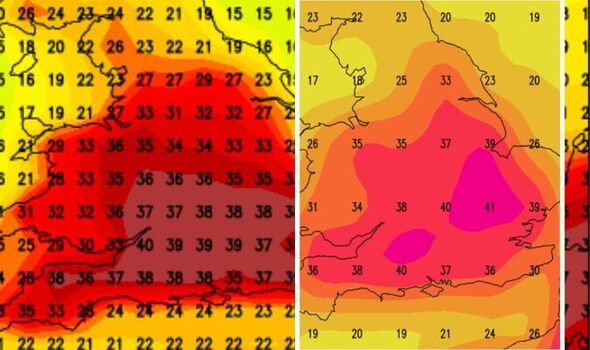 Posting the surprising model on Twitter, the Weather Outlook said the predictions of such high temperatures went on for three days in a row, in what meteorologists view as an “astonishing” forecast.

These temperatures were estimated by a weather model called Global Ensemble Forecast System, which is run by the National Centers for Environmental Prediction.

Another forecast model predicted 41C degrees in London may be felt on July 16, at 3pm.

Meteorologist Brian Gaze, founder of The Weather Outlook, explained how predictions change multiple times until the actual event occurs – but do represent a possibility.

He told Express.co.uk: “These computer models showing possible scenarios are run by forecasting centres hundreds of times a day. 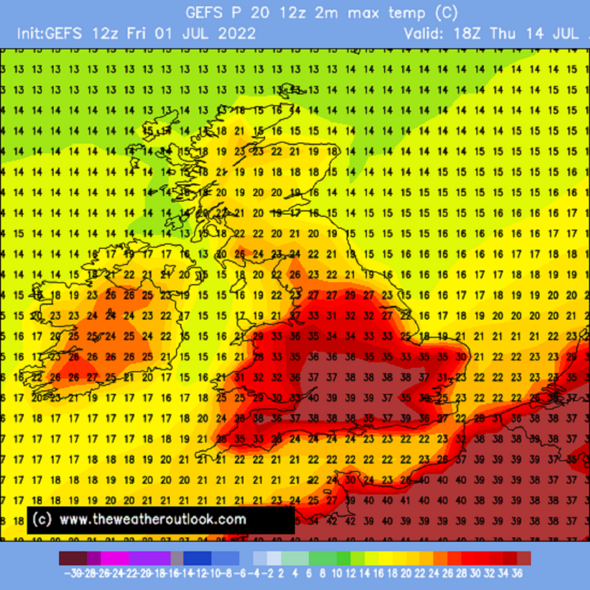 “We can’t be specific when we are looking more than a week ahead, but, at the top end, some of these models have shown extremely hot conditions of up to 41C degrees.

“At the moment, the current prediction models for the same period of time show temperatures within the low 30s.”

Mr Gaze said that the increase in temperatures in the UK is a result of the severe weather seen in southern European countries over the last month. 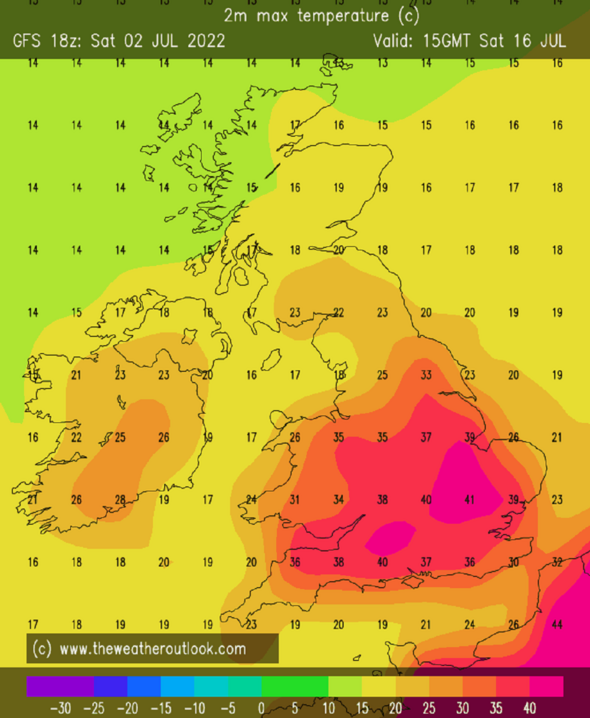 He said: “The weather has been extremely hotter than usual in southern Europe, even by their standards – and some of that could be coming forward to the UK.

“It’s certainly far too early to be confident about it happening but there’s a possibility that it will turn hot as we go through the second half of this month in the UK.

“If we start getting that air drawn up from southern Europe, we could see temperatures climbing to 35C degrees and even a little bit higher.”

The Met Office forecast for the week July 17-31 said: “Temperatures will be near or above normal, becoming warmer throughout July. We may see some very warm or hot temperatures, especially across the south.”