More than 400 detainees have been released as officials grapple with the ‘unique circumstances’ of coronavirus. 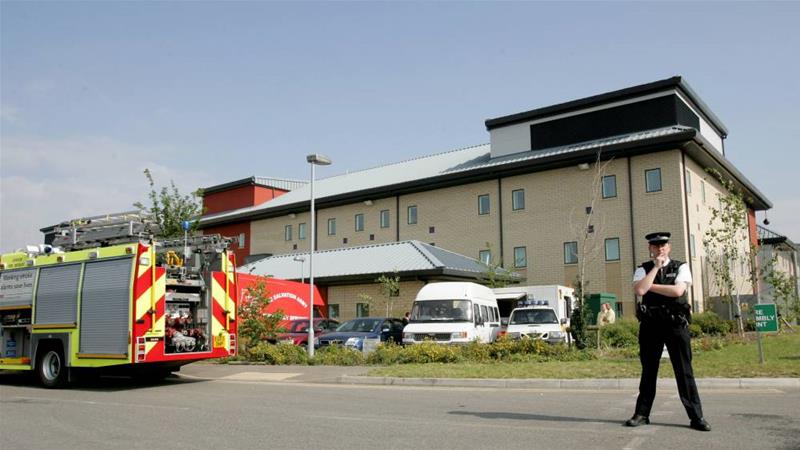 London, United Kingdom – As the lock clicked open and the heavy iron gate creaked towards him, Akil – not his real name – was surprised by how numb he felt. The freedom of which he had been dreaming for more than a year was finally here – but instead of elation, there was emptiness.

“I always thought I’d be really happy when it came to it, but I didn’t feel anything … Just a bit confused about why me – why I was being let go,” he says.

Minutes earlier, with a judge in court, solicitor at home and he in his single cell, Akil had been granted bail via video link. He was instructed to sign a document setting out the terms of his three-month release and then ordered to leave Morton Hall Immigration Removal Centre in Lincolnshire, eastern England.

Without an address of his own, Akil had no choice but to call his sister and ask to stay at her home until his temporary release comes to an end in July.

“I didn’t really know where to go,” he tells Al Jazeera. “No one asked me if I had anywhere to stay … I just got my stuff and walked out.

“If this had been a couple of months ago, I could’ve celebrated my freedom,” he adds. “But now I’m just sitting around, [I] can’t see nobody, there’s nothing going on.”

Akil is one of more than 400 immigration centre detainees to be released as part of the United Kingdom government’s plans to contain the spread of COVID-19, the respiratory disease caused by the new coronavirus.

According to the Ministry of Justice, as of last week, 153 staff and prisoners had tested positive for coronavirus and 12 had died. Temporarily releasing detainees is seen as a way to prevent a further rise in the number of cases under the care of the state.

But charities are concerned that the Home Office has not fulfilled its obligation to accommodate all those released. They say without the necessary checks, many may become destitute upon release, or return to the crimes they were convicted of before incarceration.

“Releasing people to homelessness and destitution is wrong and unlawful,” says Bella Sankey, director of charity Detention Action. “The Home Office has had months to consider its strategy. It was completely foreseeable that removals would not be possible and that people needed to be safely housed instead.”

Emma Ginn, director of charity Medical Justice, agrees: “It is crucial the Home Office provides any detainee who is released with accommodation and support, so that they can comply with the requirements for social distancing and self-isolation.”

The UK government has said it will review each individual’s circumstances on a “case-by-case basis”. Charities argue that, where reviews have been conducted, many detainees have not been informed of the outcome. They say some, like Akil, are being released by the tribunal following bail applications, or as a result of other legal action brought by lawyers, typically with medical evidence of vulnerability to contracting COVID-19.

Sidahmed, another detainee granted bail in late March, says the release process has been confused and arbitrary.

“I don’t know why I was released and other people weren’t,” he says. “It’s difficult to get bail for high-risk people usually, but maybe, because I know how the immigration services work I was allowed out.”

He says communication with the Home Office during the release process and since he was freed has been limited. He is expected to return to London on July 1, but has had no information about what is required of him until then.

“All they said was ‘If you change your address, you have to let us know’. That was it. No conversation or discussion about anything. I’ll just have to wait to hear from them.”

Both Akil and Sidahmed believe their liberty has been granted in part to protect the government’s reputation at a time of national crisis.

“The only reason they released me is because of this virus,” says Akil. “It doesn’t feel like I’m free for the right reasons. It’s all just a way to make the Home Office look good.”

Sidahmed adds: “It’s just because it looks bad when people die, that’s why they’re letting us all free … That’s not normal for immigration services – I know them. They have no mercy, they let people suffer.”

A spokesman for the UK Home Office told Al Jazeera: “The overwhelming majority of those detained are foreign national offenders, and we make no apology for trying to remove serious, violent and persistent criminals.

“Immigration Enforcement is responding to the unique circumstances of the coronavirus outbreak and following the latest guidance from Public Health England. The High Court recently ruled that the Home Office’s approach to detention and the outbreak was sensible.”

Detention is used only when absolutely necessary, with 95 percent of those liable to be detained already managed in the community, the Home Office further maintained, adding that all immigration removal centres have dedicated health facilities run by doctors and nurses which are managed by the National Health Service or appropriate providers.

But for those who remain in detention facilities, the lack of information is compounded by seeing other prisoners released.

Ebo, a detainee held at Harmondsworth immigration facility in southern England, has been assured of bail but has yet to secure a date for his hearing. He says the lack of information regarding the review process and the likelihood of coronavirus spreading has led to a rapid deterioration of his mental health:

“I’m very confused, stressed out and scared. Sometimes I feel so low I want to go to the office and smash everything up, but I know that would be a bad thing to do. I don’t know what’s going on … it gets to me.”

“If they release me, I don’t know where I’ll go,” he explains. “I can’t go back to my family house because of my previous convictions, so I think I’ll have to return to the place where I was using drugs. I don’t want to go back there, but I don’t have a choice. I need somewhere to sleep when I leave.”

Campaigners believe continuing to incarcerate immigration detainees puts unnecessary strain on those who suffer from a range of complex psychological and physical conditions.

“Some detainees have self-harmed or made suicide attempts, and others have been distressed by witnessing fellow detainees self-harming,” says Medical Justice’s Emma Ginn.

“The fact that so many detainees cannot be removed from the UK during the global lockdown makes their indefinite detention in such perilous conditions seem incomprehensible, indefensible and just plain cruel.”

But for those who have been released, the ongoing national lockdown has exacerbated fears surrounding the virus. Akil says he feels more at risk as a free man living at his sister’s home than when he was imprisoned:

“I actually felt safer inside than outside. At least in detention I had healthcare, and there’s more isolation – no one can come in, no one can go out. Now it’s all different.”

Names of detainees have been changed in this report to protect those involved.