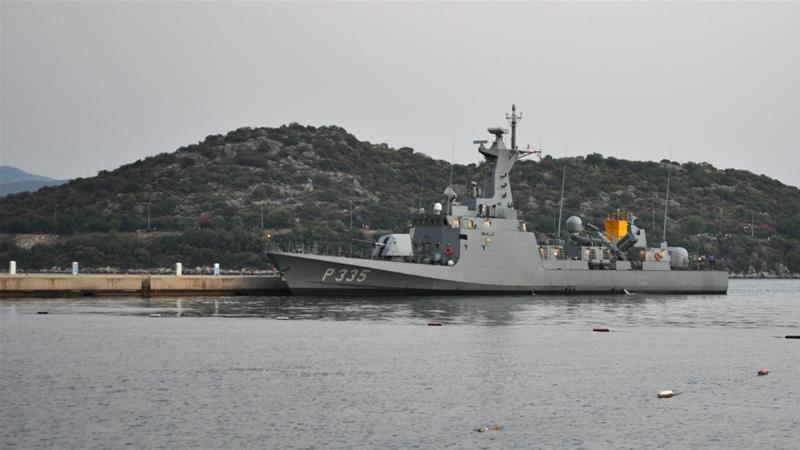 Kas, Turkey – Just beyond the luxury yachts and before the beach club hotels, lies a small Turkish warship in Kas Marina. Docked here on some days and patrolling the seas on others, it is just one sign of an unusual summer on the country’s southern coast.

Across August and September, Turkey and its neighbours have been in an increasingly fractious confrontation over disputed waters in the Eastern Mediterranean, and the right to drill for vast energy resources in them.

And while Cyprus – and the waters around it – may be the longest-standing source of that dispute, it is Kas, a small town set between the mountains and the Mediterranean Sea, that has emerged as the focus of recent tensions. “The whole world is watching!” says one local.

For easily visible from Kas across the bay sits Kastellorizo, a tiny Greek island of just 500 people. At its closest point, it is just 2km (1 mile) away from the Turkish shore. Kastellorizo is 125km (78 miles) from the larger Greek island of Rhodes to the west, and nearly 600km (373 miles) away from the Greek mainland. And the controversy this year has surrounded who owns the waters beyond it, deeper into the Mediterranean.

From mid-August, a Turkish seismic research vessel Oruc Reis – escorted by warships – spent a month mapping out possible drilling prospects in the disputed waters, a move condemned by Greece and the European Union. In response, Greek frigates were sent to shadow the Turkish flotilla, even leading to a minor collision between Turkish and Greek warships. German Foreign Minister Heiko Maas warned both sides were “playing with fire” where “every little spark can lead to catastrophe”. 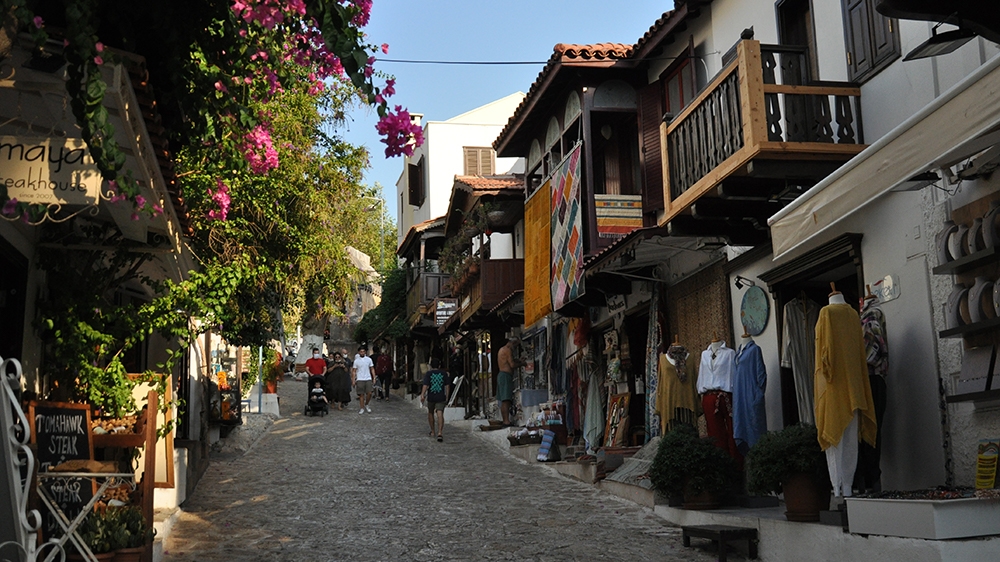 The dispute has spread onto the land as well. Last month, in a show of strength, three Turkish attack helicopters flew low over Kas, nearing Kastellorizo. At the same time, Turkey has accused Greece of deploying troops on the island, breaching its demilitarised status. Last Sunday, as Greek President Katerina Sakellaropoulou flew in to visit Kastellorizo, just a few kilometres away Turkish Defence Minister Hulusi Akar came to Kas.

Yet in Kas itself, few seem so concerned. Erdal Hacivelioglu, a local electrician and amateur historian who supports Turkey’s claims in the Mediterranean, has been texting his friends on Kastellorizo throughout showdown, barely mentioning the geopolitics at all. Drinking cay in front of his store, he explains the long ties between the two towns.

Both of course were once simply neighbours in the same Ottoman empire. And while Kas was always more Turkish and Kastellorizo more Greek, the lines between the two were much less stark. Kas is full of beautiful, bougainvillaea-lined Greek houses. Before the population exchanges of the 1920s – where 1.5 million Greek speakers in Anatolia were sent to Greece – it had a substantial Greek population too. 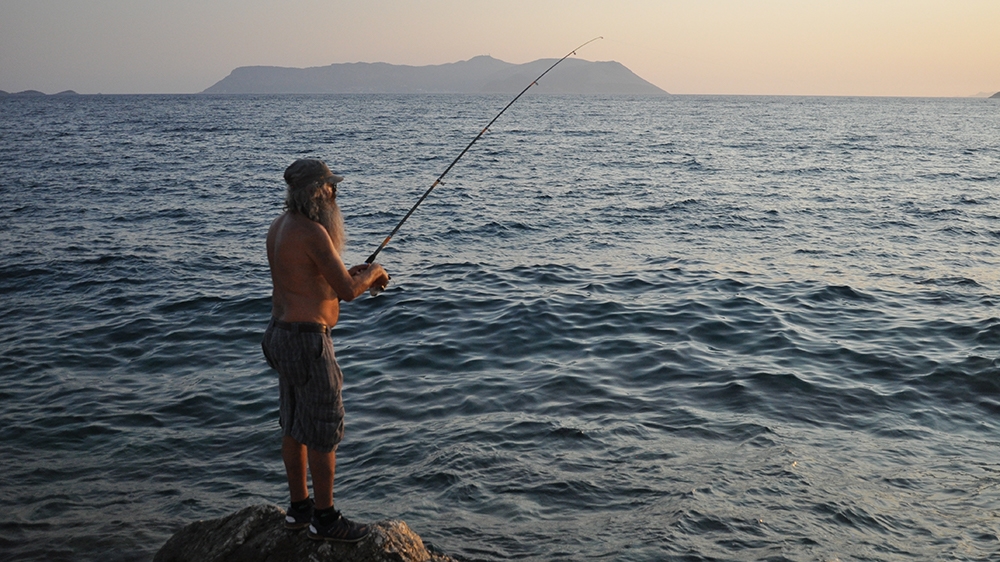 Senay Turhan, a retired teacher with a white-washed home and jet-black hair, lives on one of those narrow Greek streets. She tells stories passed down by her family of her mother visiting her Greek friends on Kastellorizo “and just like neighbours, bringing gifts”. After World War I, the island was handed to Italy and the gifts were even better still. “They had the most beautiful fabrics and better fish,” Turhan says.

When Kastellorizo was finally ceded to Greece in 1947 – after being heavily bombed during World War II – its relations with Kas froze. Trips between the two became near impossible, and neither Turhan nor Erdal ever visited in their childhoods. “There was silence,” the historian Erdal says, “but then everything changed.”

As tourism spread across the Mediterranean, it belatedly reached Kas as well, turning from a small, isolated fishing village to one of the chicest holiday destinations in Turkey. As part of it, a ferry service opened between Kas and Kastellorizo in the 1990s. There was a ceremonial football match to relaunch their relations. Now, more than 25,000 passengers a year take the boat across the bay. “Every Friday they come to market to shop,” Erdal says.

And among the younger generation, there has now even been a wedding too. As Hurigul Bakirci Magiafi explains, she met her husband Tsikos while he was visiting Kas and – sharing no common language – “we spoke English … badly!” She speaks Greek fluently now. After marrying in 2012, they spend their winters in Kas and summers on the island. “We’re all very good friends,” she continues, “everyone in Kas and Kastellorizo know each other.” 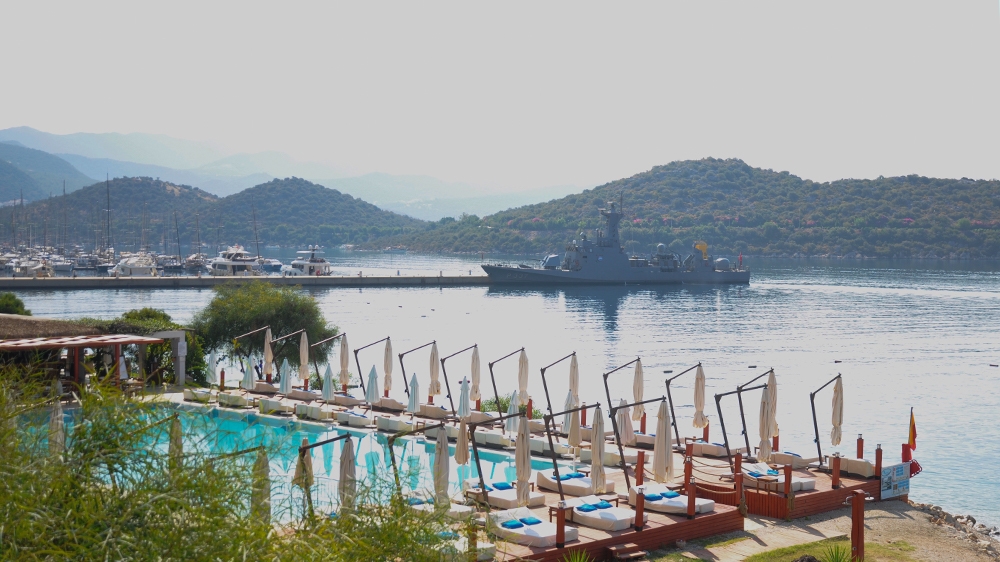 Kas has been transformed since the 1990s: first by tourism and then by good relations with Kastellorizo that came with it. Both, though, have been threatened this year: by the COVID-19 pandemic on the one hand, and the rising political tensions on the other.

As a coronavirus precaution, the ferry service has been suspended since March. Tourist numbers in Turkey in general from January to August are down 74 percent compared with the same period in 2019. In Kas, tour operators estimate their businesses in the last two months are between 60 and 90 percent of normal years.

For them at least, many Turks have replaced foreign tourists, opting to spend much of the pandemic away from Turkey’s big cities. Kastellorizo has suffered much worse. As one Greek tour manager says “at the moment we’ve got more reporters here than tourists”.

All here will be hoping there is no further escalation. Last Sunday, the Turkish seismic research vessel returned to port, leaving the disputed waters, and easing the atmosphere a little. Turkey and Greece also resumed NATO-brokered talks in Brussels, focused – if not on the wider issue of maritime boundaries – on how to minimise the risk of further incidents between their navies.

Yet, only last week, the Greek Prime Minister Kyriakos Mistotakis announced plans to buy 18 new fighter jets, four navy helicopters, and four new frigates. The week before, for his part, Turkey’s President Recep Tayyip Erdogan warned its regional rivals “they will either understand the language of politics and diplomacy, or on the field through bitter experience”.

Senior EU diplomats have also raised the prospect of imposing sanctions on Turkey at a summit this Thursday, potentially inflaming the situation further.

Yet, few in Kas believe it will get to that. “It’s just politics. It’s just children’s games,” says Turhan, laughing.

“A helicopter comes. A warship comes. But why? What reason do we have to be enemies with them? We’re like family.” 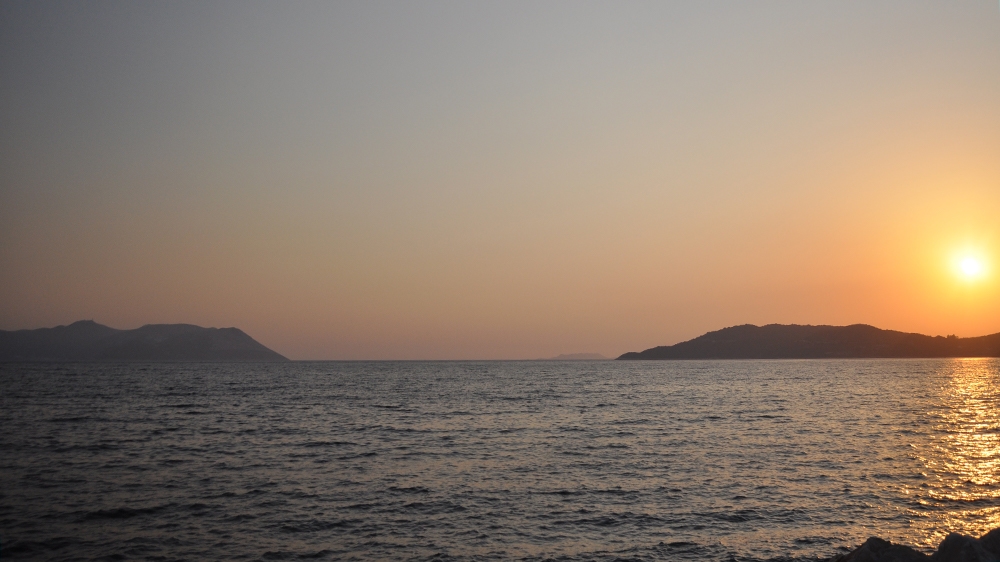