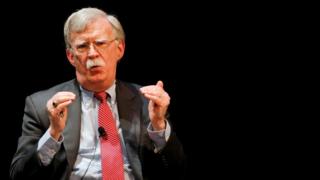 In details of the forthcoming book in US media, Mr Bolton says Mr Trump wanted China to buy agricultural produce from US farmers.

Correspondents say the episode is reminiscent of actions that led to Mr Trump’s impeachment.

The Trump administration is trying to prevent publication of the book.

According to the Department of Justice complaint, it contains “classified information”.

The book, entitled The Room Where It Happened, is due to be released on 23 June.

In January, the White House said it contained “top secret” details, which must be removed, although Mr Bolton rejected this.

Mr Bolton also addresses the claims that formed a central part of the president’s impeachment trial.

The president denied the reports and Mr Trump was acquitted after a two-week trial in the Republican-controlled Senate, which did not include any witnesses.

Mr Bolton says the inquiry might have had a different outcome if it had gone beyond Ukraine and investigated other instances of political interference.

Mr Bolton joined the White House in April 2018 and left in September the following year, saying he had decided to quit as national security adviser. President Trump, however, said he had fired Mr Bolton because he disagreed “strongly” with him.

What does Bolton allege about the meeting with Xi?

The allegations refer to a meeting between Mr Trump and Mr Xi at the G20 summit in Osaka, Japan in June last year.

The Chinese president had complained that some US critics of China were calling for a new cold war, Mr Bolton said in an extract from the book published in the New York Times.

He said Mr Trump assumed Mr Xi was referring to his Democratic opponents.

“Trump, stunningly, turned the conversation to the coming US presidential election [in 2020], alluding to China’s economic capability and pleading with Xi to ensure he’d win,” Mr Bolton said.

“He stressed the importance of farmers and increased Chinese purchases of soybeans and wheat in the electoral outcome.”

When Mr Xi agreed to make discussions on farm products a priority in trade talks, Mr Trump called him “the greatest leader in Chinese history”.

Mr Bolton also mentions an earlier conversation at the summit’s opening dinner, in which they discuss the building of camps in China’s western Xinjiang region.

Mr Trump said the construction should go ahead as it was “the right thing to do”.

Human rights groups have strongly criticised China over the camps, where about a million Uighurs and other ethnic minorities have been detained for punishment and indoctrination.

What else does the book say?

He includes details of a number of private conversations. Among other things, Mr Trump is alleged to have been unaware that the UK was a nuclear power or that Finland was a country.

On one occasion, Mr Bolton writes, the president said he would threaten to withdraw from Nato if allies in the bloc failed to increase defence spending.

And he remarked that Mr Pompeo – generally considered loyal to Mr Trump – once complained he was having a “cardiac arrest” during a presidential phone call with the South Korean leader.