The Democrat, who is third in line to the US presidency, has touched down in Taiwan – becoming the first Speaker to visit the contested territory in 25 years. China had threatened to impose a no-fly zone in a bid to prevent Ms Pelosi’s visit and state media propagandists have warned that her jet could be attacked. Commentator Hu Xijin warned that if US fighter planes escort Ms Pelosi’s plane into Taiwan, they would view the visit as an “invasion”. Beijing views Taiwan as a rebel state which belongs to China and President Xi Jinping has vowed to take the island back by force if necessary, while the US has vowed to protect it’s sovereignty. Describing it as the “worst-case scenario,” geopolitical expert Brandon Weichert told The Sun: “Her harm or death would trigger a massive international incident the likes of which has not been seen since 1914. Xi Jinping and Nancy Pelosi hold the world’s fate in their hands. And no one knows what happens next… much like 1914. Not since the world wars have the personalities of individual world leaders mattered so much to the historic decisions about to be made.” 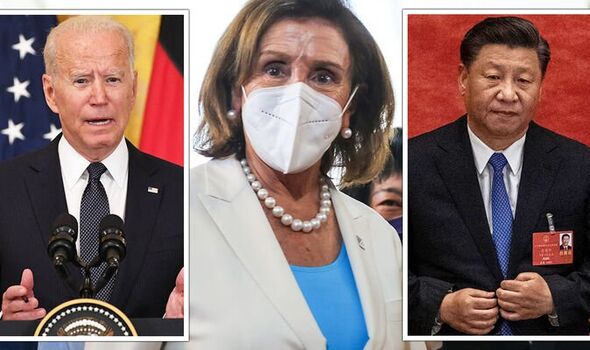 Chinese military drills have invaded Taiwan’s territory in what is seen as a direct response to Nancy Pelosi’s visit to the region.

The military drills were announced by Chinese state media with a picture of a map being tweeted identifying the areas being used for such exercises.

The move from Beijing comes after US Speaker of the House Nancy Pelosi called Taiwan “one of the freest societies in the world”.

According to the Defence Ministry, the military exercises by China have amounted to a blockade of Taiwan’s sea and air space.

The Defence Ministry in Taiwan said that China has broken rules implemented by the United Nations and added that it would counter any breaches of its territory.

Good morning from London. I’m Tara Fair, I’ll be bringing you all the latest developments on rising tensions between China and the US over Taiwan. Please feel free to get in touch with me as I work if you have a story or tips to share! Your thoughts are always welcome.