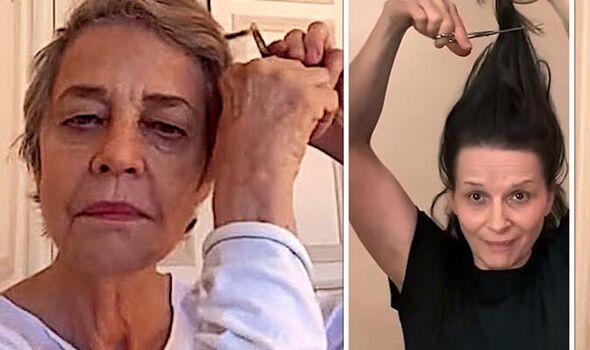 Actress Charlotte Gainsbourg and her mother – the singer and actress Jane Birkin – also videoed themselves chopping their locks in the solidarity protest.

Mahsa Amini, 22, was arrested on September 13 in Tehran because her headscarf was not tight enough and some of her hair showed. She died three days later in hospital.

Her death triggered ­protests – including schoolgirls removing their headscarves – in which at least 130 people have died.

The English Patient star Juliette, 58, said: “For freedom” as she snipped off a huge handful of hair and held it up to the camera. She was joined on video by French A-listers including Oscar winner Marion Cotillard and Isabelle Adjani, who played a Farsi rendition of Italian protest song Bella ciao (Goodbye beautiful).

Posted on Instagram by Support for Women of Iran, it included the text: “Mahsa Amini was abused by the morality police until death followed. All she stood accused of was wearing her veil in an inappropriate manner. She died for having a few locks of her hair exposed.”

Iran’s clerical rulers have been grappling with the biggest unrest in years since Mahsa’s death.

The protests have spread worldwide, including in London, Paris, Rome and Madrid.