Home » Sometimes All You Need Is a Perfect Rotisserie Chicken

Millions of animal species roam the earth. Only a few dozen end up on posters for the zoo, though, or featured in calendars mailed out by environmental organizations. These animals, which tend to be impressively large, all have a certain star quality: the elephants, the giraffes, the gorillas, the big cats. In the phrase used by zoologists and conservationists, they are charismatic megafauna. A pride of lions on a fund-raising pitch can be relied on to bring in money that can be used to save the ground squirrel and the lilac-breasted rollers.

Back when the restaurant ecosystem was functioning healthily, it had its charismatic megafauna, too. These were the places that people halfway around the world have heard of, the ones whose names would be mentioned whenever the best food cities came up for debate; the ones around which a whole class of tourists would plan international food safaris.

But a city’s most famous restaurants aren’t always its most important, just as the giant panda isn’t necessarily the species most crucial to the health of its habitat. If this distinction wasn’t already obvious, it has been made clear over the past year. Some of New York’s most avidly followed kitchens have been dark for most or all of the pandemic, including the Grill, Atomix, Per Se, Balthazar and Le Coucou. One predictable, if still very weird, effect of this is that these restaurants, once constant attention getters, are now talked about so little that it’s as if they never existed.

Most of the places that have played significant parts in the pandemic lives of New Yorkers — the New Yorkers who stayed, not those who fled — are virtually unknown in Los Angeles and London. To qualify, a restaurant needs to cook exactly what you want for dinner tonight. If it’s within walking distance of your home, even better. 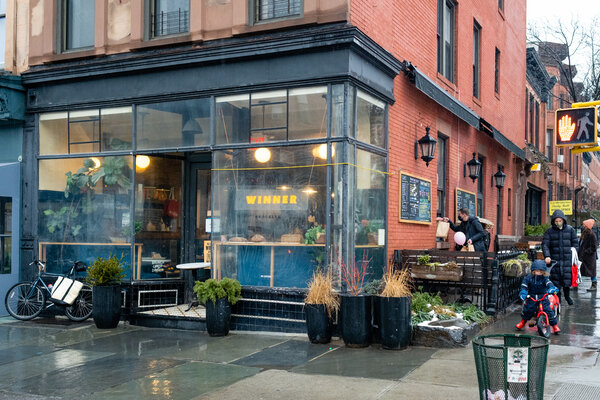 Winner, in Park Slope, is too far from my own Brooklyn neighborhood for me to walk round-trip on an empty stomach. But in almost every other way, it is my ideal pandemic restaurant and its rotisserie chicken, brushed with smoked honey and rounded out with a pound or so of roasted potatoes, some braised kale and a noticeably fresh sourdough baguette, is my ideal pandemic meal.

Daniel Eddy, its owner and chef, opened what was meant to be the first part of Winner’s operation, a corner bakery and cafe, last March. It ran for four days before closing; an adjacent wine bar hadn’t opened yet and still hasn’t. Ever since, Winner’s food has been strictly to-go. Most of it is destined to be eaten elsewhere, although in decent weather it’s possible to unwrap your haul at one of the small tables on 11th Street, just off Seventh Avenue.

I’ve been a semiregular customer over the past few months. In the morning I’ve swung by for a macchiato and one of the remarkable sourdough croissants, tangy and a little salty, that the pastry chef, Ali Spahr, makes. I’ve picked up dinner on several evenings, too. Each time, I’ve been impressed by Winner’s ability to pack so many of the things I miss about restaurants into a simple exchange transacted through a window.

One way the restaurant achieves this is by refusing to do delivery. You can order breakfast and lunch at the window; dinner has to be arranged in advance, by email. Either way, your first encounter is with one of Winner’s employees or Mr. Eddy himself, not a third-party app. Apps may be convenient, but I’ve never used an app that remembered that a member of my household has a life-threatening food allergy, as a Winner employee did the second time I placed a dinner order. Nor have I had one offer to set aside a few loaves of bread, which typically sell out by late afternoon.

Those breads are worth the trouble. Kevin Bruce, whose last job was kneading Danish rugbrod and grantoftegaard at Great Northern Food Hall, bakes six kinds of loaves a day in a two-rack oven on a tight schedule. It starts at 7:30 a.m., when hefty little bricks of dark rye shot through with sunflower seeds are ready. A sourdough boule whose composition changes day to day comes out at 11 a.m.; the buckwheat version sold on Tuesdays and Saturdays is something of a miracle, at once suave and earthy. The baking day ends at 2 p.m., when the baguettes go on sale.

A baguette plus a rotisserie chicken nearly always equals a satisfying dinner. They add up to considerably more than that at Winner, where the bread is just a few hours old and the roast was finished within half an hour or so of your pickup appointment. While you wouldn’t call Winner a French restaurant, the extraordinary attention it pays to ordinary staples may remind you of the neighborhood shops in Paris, where Mr. Eddy lived while he was cooking under Daniel Rose at Spring. (More recently, he was the opening chef at Rebelle, a French restaurant on the Bowery that is now closed.)

The pandemic has brought the city a flurry of new pop-ups. Winner hosts one every week, with a guest chef who cooks a “friends and family meal.” A few weeks ago, the program introduced me to the rich delights of collards in shrimp sauce as prepared by Telly Justice, a trans woman who is planning to open “a restaurant by queer people for all people” in Brooklyn, to be called Hags.

I don’t exactly remember which wine Lisandra Bernadet, the sommelier, recommended with Telly Justice’s cooking, but I believe it came from Slovenia, glowed with a pale-gold skin contact tint, had been made about eight years ago and, like almost all the bottles at Winner, cost well under $40. A conversation through an open window about Slovenian orange wines is another thing I’ve never gotten from GrubHub.

Winner’s wine bar is in a former carriage house, where there is just enough room for the rotisserie oven, a few standing customers and a single table. Will strangers ever rub elbows there? Will travelers with freshly scanned passports give Winner’s address to their drivers at the airport? They should. There isn’t anything mega about the place, but it’s loaded with charisma.

What the Stars Mean Because of the pandemic, restaurants are not being given star ratings.