Russian soldiers have left behind a detailed mural on the walls of an abandoned prison building in the city of Kupiansk in Kharkiv Oblast, eastern Ukraine. The makeshift prison, understood to be a former police building, was occupied by Vladimir Putin’s soldiers for several months before Ukrainian forces moved in to liberate the region. It is thought up to 400 prisoners at a time were held by the Russian military in the detention centre, sometimes forcing up to nine people to share one cramped cell. In addition to the mural, as Kyiv’s troops moved through the building, they uncovered numerous booby traps arranged by Russian forces before they abandoned the city.

During the period of Russian occupation in Kupiansk, which had a population of around 28,000 before the war, Moscow’s troops painted a large mural in a corridor of the now-abandoned prison building.

The artwork depicts a uniformed soldier, clearly identified as belonging to the Kremlin’s forces by the ‘Z’ badge brandished on the arm of his kit.

Next to the soldier, the mural depicted a pensioner, waving the hammer and sickle flag of the Soviet Union.

The two figures, painted in striking detail, stood boldly in front of a backdrop of flames and fire which spread across the entire expanse of the concrete wall. 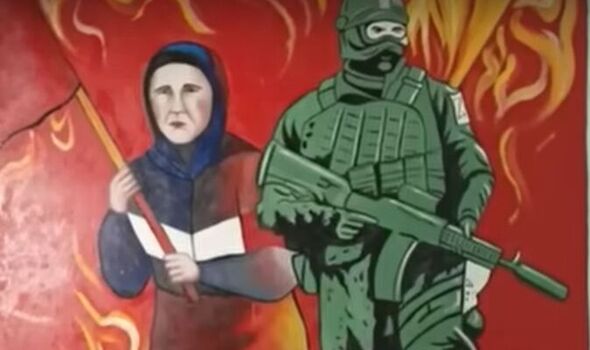 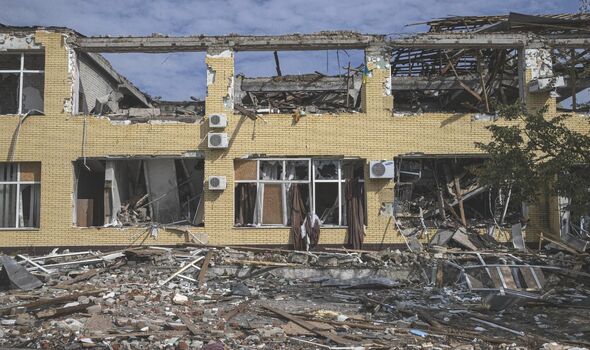 Elsewhere, the interior of the building showcased horrific scars of the Russian occupation as Putin’s forces had laid traps ahead of their panicked retreat.

While some of the cells had been cleared by the liberating forces, other rooms had warnings near the doors, hastily scrawled by Ukrainian soldiers, which read “Grenade”.

The cells were sparsely furnished, some contained visibly broken beds and a couple of tables and all were littered with clusters of rubbish.

Two Russian flags close to the entrance had also been torn to the ground and one showed signs of an attempt to burn the material. 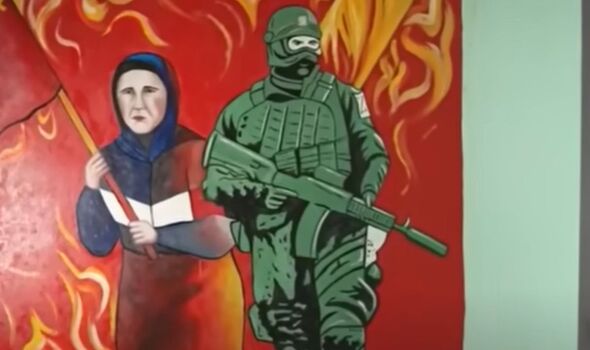 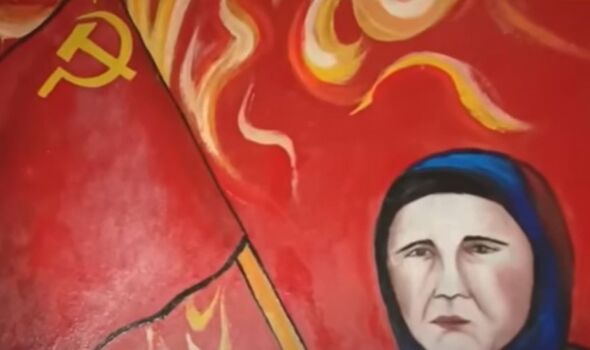 As Ukrainian forces have moved in on Russian-occupied Kharkiv, authorities reported signs of torture conducted by Moscow’s troops in the now liberated regions.

In an evening address, President Zelensky confirmed at least 10 apparent torture facilities had been uncovered across Kharkiv. He described the buildings used by Russian military during their control of Kharkiv as “torture chambers”.

Exhumation work had begun on mass burial sites within the liberated region of Izyum as part of a wider investigation into the conduct of Russian forces during the months under occupation.

President Zelesnky said: “We will identify all those who tortured, who humiliated, who brought this atrocity from Russia here, to our Ukrainian land.”

Don’t miss:
Should UK continue to pay so much to Ukraine? VOTE [POLL]
Putin hammer blow as Black Sea fleet forced to retreat  [REPORT]
Putin ‘would suffer a massive loss’ if he demands full mobilisation [ANALYSIS] 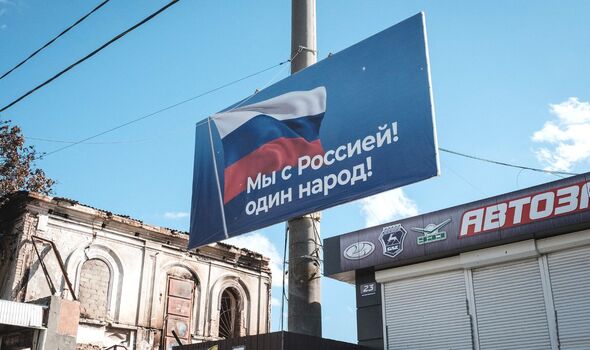 The hasty retreat from Kharkiv forced Putin’s troops to abandon much of their military equipment within the region.

Despite the Russian armed forces reportedly suffering from a crisis of artillery supplies, Ukrainian liberators have uncovered warehouses piled high with weapons ditched by Moscow’s troops.

The UK Ministry of Defence confirmed Russian troops withdrew from cities within Kharkiv, leaving behind scores of high-value equipment and highlighting the “disorganised” nature of Kremlin military coordination.

Kremlin media reports have described the retreat as a deliberate tactic to regroup Russian forces, while stringently denying that Ukraine has reclaimed any strategically valuable territories.

Read next:
Russia loses four elite fighter jets in 10 days
Ukrainian soldiers snatch back Luhansk in blow for Russia
Liz Truss pledges to carry on supporting Ukraine
Putin warned military coup ‘most likely’ to overthrow twisted regime
Trudeau slams Putin insisting he should ‘be held to account for the…