Home » World News » Restaurant Review: A Magnet for Wine Nerds Gets a Recharge

While some of the faces at Chambers are the same, a new chef is rejuvenating the former Racines NY space with armfuls of seasonal produce.

Peppers and sunchokes vie for attention with black sea bass.Credit…Colin Clark for The New York Times

Has any restaurant in the city pulled off a pandemic reset to better effect than Chambers? It’s built from the earthly remains of Racines NY, a clubhouse for wine nerds that ran on Chambers Street in TriBeCa for about seven years before closing in 2021. Several faces are the same, the floor plan has barely changed and wine is still the point of the place.

But Chambers has a warmer and more generous spirit than Racines NY. Much of the credit belongs to the chef, Jonathan Karis. He has been dishing out prime seasonal ingredients by the armful each night since the restaurant opened, a week or so before the official start of summer, and seems poised to keep up the momentum as fall produce piles up in the markets. 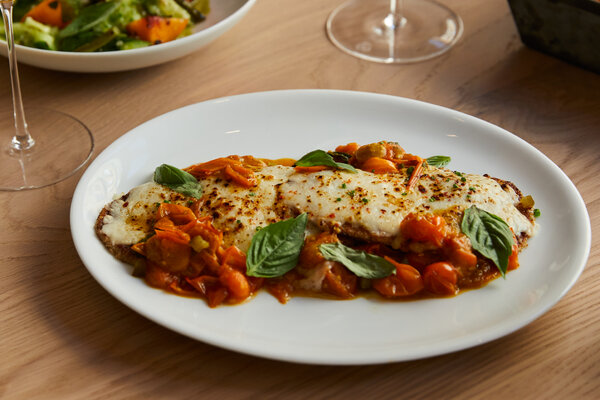 Mr. Karis spent six years cooking at Gramercy Tavern, most recently as Michael Anthony’s chef de cuisine, and some of his plates may remind you of the relaxed, generous, highly seasonal menus in that restaurant’s front room. Influence in the kitchen is rarely so clear or so welcome; like his last boss, Mr. Karis is clearly too enamored of the produce in his kitchen to waste it on paltry little garnishes. His strews it around; his plates swirl with color. The servings of fish and meat are fairly generous, too, but when they show up at the table your eye goes straight to the vegetables.

The first thing you notice in his reworking of eggplant Parm is not that it’s wearing a jacket of melted Cheddar and another Vermont cheese. This comes later, along with a realization that this seemingly heretical change somehow makes sense. Before that, you see that the eggplant cutlets are surrounded by handfuls of Sungold tomatoes, warmed with shallots and garlic until their skins split and their juices run out. It’s defiantly not the red-sauce classic. The sauce isn’t even red.

Shishito peppers — some sliced and fried, others kept whole and seared on a plancha — almost hide the steamed Manila clams they’re tossed over, the way the clams hide a square of toasted pizza bianca that sits at the bottom of the dish soaking up clam and pepper juices. (A tall, chewy wedge of that pizza bianca, beaded with sesame seeds, goes to every table at the outset so it can do the soaking-up with other dishes, although it’s terrific on its own.)

Thick, almost velvety leaves of lightly charred Malabar spinach are draped around a flattened half-chicken, raised in Sullivan County, N.Y., and bronzed to a crisp on the plancha. Enough artichoke hearts lounge alongside the grilled and roasted lamb to pass as an appetizer in another restaurant. But of course they belong with the lamb, which is wonderful, its juices mingled with flakes of Aleppo pepper and whole mint leaves.

As you’d expect, Chambers excels at dishes that are almost nothing but produce. Juicy chunks of Frog Hollow peaches mixed with Persian cucumbers and seared sticks of garlic scapes bathe in a bright green, gin-scented juice squeezed from basil and more cucumbers. Skinny red Italian frying peppers are slashed from end to end, and then filled with a warm vein of melted feta dotted with fried bread crumbs.

So far, the heaps of produce in the kitchen don’t tumble over into the desserts as often as you might hope. Poached peaches cap a fine trifle with cool layers of whipped cream and butterscotch pudding. But angel food cake, one of the best foils for summer fruit ever invented, got only a few strings of candied lemon peel laid over a scoop of whipped cream. What the cake did get was enough fresh oregano to turn it the color of a golf course. Whether that was good for the cake is up for debate.

In general, though, the food is more direct and engaging than it was under any of the several chefs who cycled through Racines NY. The dining room has been made more appealing, too. A few tables were vaporized, giving the space a little breathing room, and the ones that are left shine in white pools of focused light that make the plates look even more painterly.

The service has a practiced air, no doubt because some of key players survived the transition. Jared David, the general manager of the old restaurant and the new one, patrols the dining room yet always seems to be waiting at the door when new arrivals walk in. Pascaline Lepeltier stayed on as the beverage director, helping to steer a wine list that she has been building for several years.

In its early days as a clubhouse for wine nerds, Racines inclined toward French bottles, while Chambers tries harder to span the winemaking world and to feature what Ms. Lepeltier calls “conscientious farming.” This has only encouraged the nerds. On certain nights, half the tables will be occupied by wine importers, winemakers, wine writers and sommeliers on a night off. The number of bottles on the list hovers around 1,000, roughly a third of the restaurant’s full stash. Plenty are known quantities, and there are wines that will make your rich friend who collects Burgundies break out in a cold sweat.

But the nerds come to Chambers for the unknown, for some wines they haven’t tasted and others they haven’t even heard of. Ms. Lepeltier always seems to have the last vintage some cranky old vintner from the Loire made before dying, or the first one from a novice producer in territory everybody else has written off.

In her choice of regions, styles, techniques and winemakers, Ms. Lepeltier is a champion of the not-yet-famous. As a result many of the wines at Chambers are strikingly affordable, which is where the interests of the nerds coincide with those of the everyday drinking stiff. You don’t have to look hard to find a bottle for $50 or so, a number that is almost an endangered species in New York these days. And while wines by the glass at local restaurants typically start at around $15, Chambers has at least two, including one poured from taps at the bar, for $9. At those prices, the clubhouse could get crowded.