Authorities in Doha ‘to make every effort’ to prevent the spread of coronavirus and protect its residents. 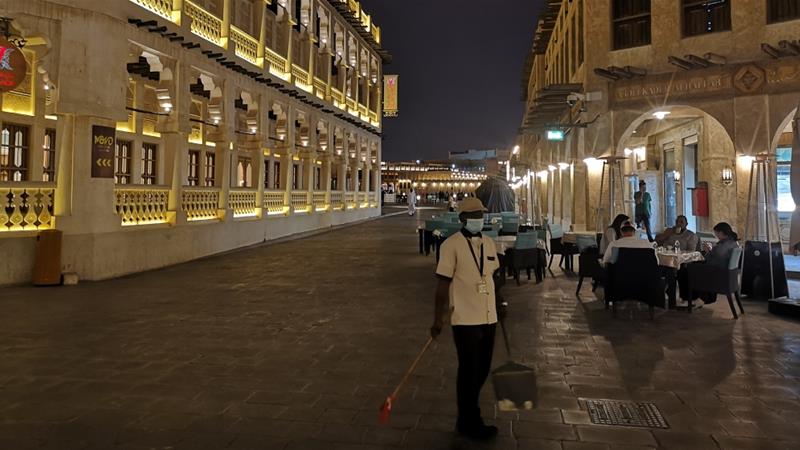 Qatar has said it is making every effort to prevent the spread of the coronavirus and protect its residents, including millions of expatriate workers, a day after a rights group criticised the Gulf state over its handling of the crisis.

A statement released by the Qatari government on Saturday said it is working closely with employers in the country to “ensure the welfare and medical needs of the residents are met”.

More than 480 COVID-19 cases have been reported in Qatar, the highest in the Arab Gulf region. There has been no death in the country so far.

On Saturday, Qatar’s ministry of municipalities and environment said it is closing parks and public beaches until further notice to contain the spread of coronavirus.

A majority of Qatar’s cases have been located in what is called the Industrial Area, a commercial hub outside capital Doha where the bulk of its migrant workers live.

The area is under complete lockdown since last week to check the outbreak.

“In the quarantined area, individuals are being seen by doctors and medical personnel, with regular testing and monitoring for all individuals,” Qatar’s Government Communications Office (GCO) said in a statement to Al Jazeera.

“Those testing positive or displaying symptoms are kept under close medical attention and are transported to a hospital if necessary.”

The statement followed a report by rights group Amnesty International, which said migrant workers in Qatar are at a “particular risk of exposure to the virus“.

“Labour accommodation camps are notoriously overcrowded, and lack adequate water and sanitation, meaning that workers are inevitably less able to protect themselves from the virus,” Amnesty said.

“Workers’ proximity to one another in cramped camps also does not allow for any type of social distancing.”

On Friday, The Guardian newspaper reported that Qatar’s migrant workers were living in a “virtual prison“ where they were held in “an atmosphere of fear and uncertainty“.

The Guardian report alleged that some workers were being put on unpaid leave until further notice.

Qatari authorities, however, said they were ensuring the salaries of the workers were paid amid the lockdown.

“Food, water, masks and hand sanitisers are being regularly distributed. In coordination with companies, the Ministries [of Labour and Public Health] are ensuring that workers’ daily needs are met and salaries paid on schedule,” the GCO said.

It added that there have been no deaths from coronavirus in Qatar and more than 90 percent of cases are in “good and stable condition“.

So far, 27 people have already recovered from COVID-19, including four Qatari citizens, according to the health ministry.

Qatar said all its residents or visitors who have confirmed or are potential cases of COVID-19 since March 16 have been placed in quarantine and are receiving medical care and accommodation under the direction of its Ministry of Public Health.

Amid growing fears of the spread of the virus, Qatar last week banned entry of foreigners and suspended all incoming flights.

On Tuesday, it also announced the closure of all shops and bank branches, except for food stores and pharmacies. Eighty percent of government employees have also been ordered to work from home.