Over the years, Prince Harry has engaged in a fair few royal scandals that have shocked the nation.

From a short stint in rehab to the Nazi uniform scandal, Prince Harry has often been seen as the rebellious brother in comparison to heir-to-the-throne Prince William, who has managed to keep his controversies to a minimum.

Years before King Charles III's youngest son left the firm, his royal antics were often captured under the spotlight, labelling the Prince as the firm's 'royal bad boy'.

But what are Prince Harry's most controversial moments? 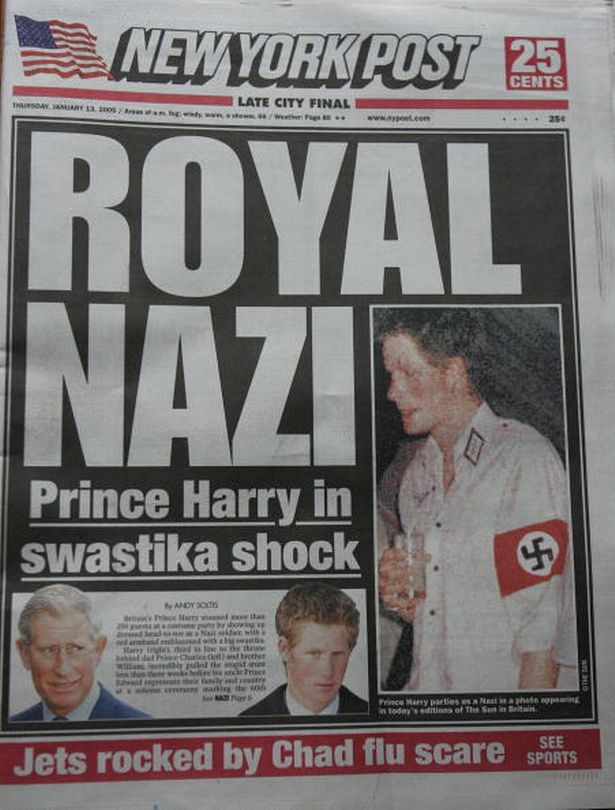 Headlined 'Harry the Nazi', an article with an image of Prince Harry dressed in Nazi uniform at a Halloween party made the front page of The Sun newspaper.

The image sparked outrage, with the prince issuing a public apology reading: "[I am] very sorry if I caused any offence or embarrassment to anyone. It was a poor choice of costume and I apologise."

Prime Minister at the time, Tony Blair, also had his office issue a statement on the matter as they stated: "Clearly an error was made that has been recognised by Harry, and I think it is better that this matter continues to be dealt with by [Buckingham] Palace."

Prince Harry sparked outrage once again with the public in 2009 when he was heard using racial slurs in a 2006 "home video" of his fellow training officers at the Sandhurst military academy.

The prince described one of his friends with the racial slur "P***" in a video clip.

St James's Palace issued an apology on behalf of the prince, stating: "Prince Harry fully understands how offensive this term can be, and is extremely sorry for any offence his words might cause.

"However, on this occasion three years ago, Prince Harry used the term without any malice and as a nickname about a highly popular member of his platoon. There is no question that Prince Harry was in any way seeking to insult his friend."

His short stint in rehab

It is not often that a member of the royal family is placed in a rehab facility , but Prince Harry found himself in Featherstone Lodge Rehabilitation Centre in Peckham following an intervention by his father.

The then-16-year-old was reportedly sent off to rehab for smoking marijuana and heavy drinking.

However, he was only in the facility for a day, with St James' Palace saying in a statement: "This is a serious matter which was resolved within the family, and is now in the past and closed."

The naked pictures in Las Vegas

In 2012, the young prince took a trip to the gambling capital of the world, Las Vegas.

On the trip, he took part in a casual game of strip billiards, which concluded with the Prince nude in a hotel room on the Las Vegas strip.

Images of the naked prince were later published on American gossip site, TMZ.

At the time, The Atlantic reported that Clarence House had no official comment, but did confirm that it was Prince Harry in the photographs.

His scraps with photographers

Over the years, Prince Harry has been involved in many scraps with photographers.

One scuffle took place back in 2004 when the young prince was leaving London nightclub Pangea.

The youngster became annoyed with photographers who were trying to snap his picture, with Harry's and the photographer's face injured during the row.

A spokesperson said at the time: "Prince Harry was hit in the face by a camera as photographers crowded around him as he was getting into a car.

"In pushing the camera away, it's understood that a photographer's lip was cut."

Meanwhile, the photographer in question said: "[Harry] lashed out and then deliberately pushed my camera into my face. The base of the camera struck me and cut my bottom lip. At the same time he was repeatedly saying, 'Why are you doing this? Why don't you just leave me alone?'"

Another scrap with a photographer occurred in 2007, however, Prince Harry's rep brushed off the incident.

They said: "On the way out of the nightclub, he stumbled on the curb and fell on the photographer. There was no aggressive intent; they were laughing at it at the time."