Oxford University’s Oriel College will set up an independent commission to decide if Rhode’s statue is to be removed. 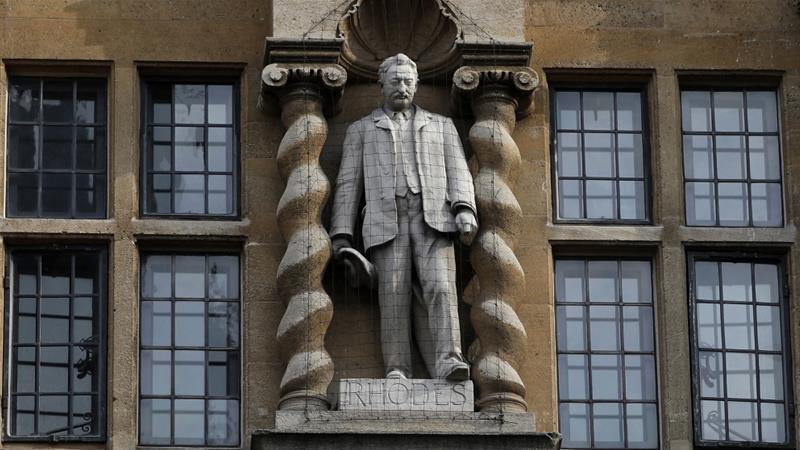 An Oxford University college said on Wednesday that it wanted to remove from its facade a statue of 19th-century colonialist Cecil Rhodes that has been a target of anti-racism protests, though the decision would be made independently.

Oriel College has been under pressure for several years from the #RhodesMustFall campaign, which argues the statue glorifies racism and is an insult to Black students, but the college has previously resisted calls to remove it.

His statue was removed from the University of Cape Town in South Africa in 2015 after students led a “Rhodes Must Fall” campaign.

The movement was reinvigorated by the global wave of anti-racism protests in the wake of the death of George Floyd in Minneapolis, and on June 9, a large demonstration took place outside the college, renewing calls for the statue’s removal.

Some social media users were quick to support the decision, with some saying it was “long overdue” while others said the statue’s dismantlement was necessary because “Black Lives Matter”.

In the UK, the Black Lives Matter protests have ignited a debate about monuments commemorating the nation’s imperialist past.

A debate is raging over monuments to those involved in its imperialist past, especially after the statue of slave trader Edward Colston was torn down and thrown into the harbour of Bristol port earlier this month. In London, a statue of Winston Churchill was daubed with the words “was a racist”.

Zahra Sultana, a member of parliament, said the “white supremacist’s statue” must go after years of calling for its removal.

This is the #RhodesMustFall demo in Oxford.

I remember attending an RMF event in 2015. RMF called for this brutal white supremacist’s statue to be removed. Oriel College consulted. Wealthy donors threatened to withdraw funding. The statue stayed.

A student at Oriel in his youth, Rhodes left the college money and also endowed the Rhodes Scholarships, which have allowed more than 8,000 students from countries around the world, including former US President Bill Clinton, to study at Oxford.

The mining magnate was a central figure in the UK’s colonial project in Southern Africa, giving his name to Rhodesia, present-day Zimbabwe, and founding the De Beers diamond empire.

The body of Oriel said it would launch an independent commission of inquiry into the issues surrounding the statue, to which it would recommend that it be taken down.

“The Commission will deal with the issue of the Rhodes legacy and how to improve access and attendance of BAME [black and minority ethnic] undergraduate, graduate students and faculty, together with a review of how the college’s 21st Century commitment to diversity can sit more easily with its past,” Oriel said in a statement.

The inquiry will invite submissions from students, representatives of the #RhodesMustFall campaign, Oxford city council, alumni of the college and others.

Oriel’s governors said the commission would investigate broader issues of diversity at the college.

The statue will stay up until the inquiry finishes its work later this year.