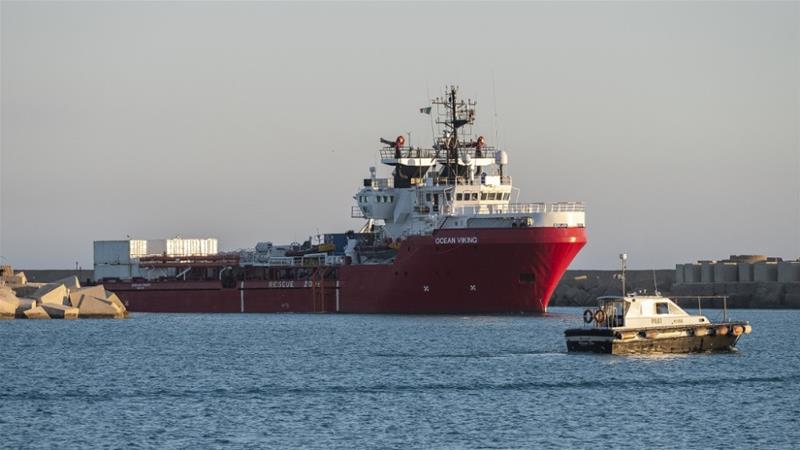 Three migrant rescue organisations have called on the Italian government to release private rescue vessels being held in Italy’s ports.

The ships had been prevented from setting sail on “spurious grounds … to prevent the rescued [migrants] landing in Europe by any means”, Sea-Eye, Sea-Watch and SOS Mediterranee wrote in a joint statement published on Tuesday.

Meanwhile, the number of migrants requiring rescue continued to climb, the charities said, and called for boats Ocean Viking and Sea-Watch 3 to be allowed to leave Sicily, where they had been impounded.

The group criticised the European Union’s “failure” and demanded that Germany use its current European Council presidency to introduce a “solidarity distribution mechanism” for migrants.

Italy impounded the Ocean Viking, a ship belonging to organisation SOS Mediterranee, on July 22 at Porto Empedocle, two weeks after the vessel Sea-Watch 3.

Authorities cited security and administrative irregularities in both cases.

All irregularities that could be remedied had been fixed on board Sea-Watch 3, said activist Marie Naas, adding that German authorities did not deem Italy’s remaining complaints to be valid.

“We still don’t know if we can set sail at all in the near future,” Naas said.

Another ship, Sea-Watch 4, run by the Protestant church, is almost ready to set sail, though a definite time has not been set.

The vessel Alan Kurdi of the organisation Sea-Eye is currently being repaired in Spain, though it is still lacking authorisation to reach the rescue area between North Africa and Italy, a Sea-Watch spokesperson said.