The Met Office has issued a weather warning for Friday across much of Northern Ireland. The yellow wind warning is in place between 10am and 9pm, with the Met Office warning of possible travel disruption. 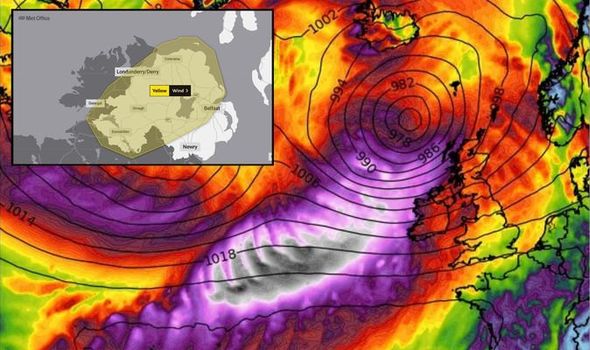 The Met Office warns to expect delays for high-sided vehicles on exposed routes and bridges.

Some short term loss of power and other services is possible, alongside some branch and tree damage causing localised transport disruption on roads and railways.

The Met Office warn wind gusts up to 60mph could also be possible in some areas.

The warning reads: “Strong southwesterly winds will affect the area on Friday.

“Blustery showers will bring gusty conditions at times, with wind gusts of 50 to 60mph in places.

“With trees in full leaf, fallen branches and damaged trees may cause some localised travel and power disruption.”

Enniskillen, Donegal, Londonderry/Derry, Coleraine, Omagh and Belfast are included under the warning.

The Met Office weather warning has been issued just a day after the UK witnessed its hottest day of the year so far.

On Wednesday temperatures of 28.2C were recorded in Suffolk, with much of the UK basking in 20C+ heat.

Temperatures prompted Brits to flock to the nation’s beauty spots, raising concerns for the lack of adherence to social distancing measures.

After a few days of high temperatures, the Met Office warn parts of the South East of England will potentially see thunderstorms and heavy downpours on Thursday.

A Met Office spokeswoman told The Sun: “One or two showers could break out through the morning into the afternoon, and again with the risk of thunder.

“And yes, through the afternoon you could see the odd isolated heavier bursts.”

An deep area of low pressure is due to arrive on the North West of the UK, causing the mercury to drop.

Met Office deputy chief meteoroligst Matthew Lehnert said: “On Friday, a deep area of low pressure will track to the northwest of the UK.

“It will bring a spell of strong winds and a risk of gales to parts of Northern Ireland, northern England and much of Scotland.

“Along with strong winds, it’ll turn showery over the weekend and temperatures much cooler than earlier in the week, returning to around average for this time of year.”