The country is experiencing cooler and windier conditions this weekend after the mercury surged to highs of 27 degrees in some parts last week. This saw thousands of Britons flock to beaches and beauty spots across the UK as the Government continues to ease coronavirus lockdown measures. But today and Sunday Britain will be lashed by thunderstorms and severe rainfall, with more than 100mm of rain set to hit parts of Scotland.

The Met Office said the last week of May will begin with dry conditions but thicker cloud that will bring some outbreaks of rain.

But by the end of this month, these outbreaks of rain, coupled with warmer temperatures, could trigger huge thunderstorms across England.

The rain across Scotland could then move further to the east, bringing with it drier and more settled conditions across large parts of the UK.

Temperatures are likely to be “warm and above average in central and southern areas, but cooler in the north. 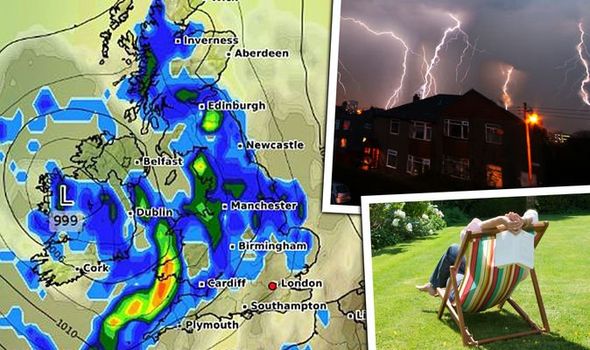 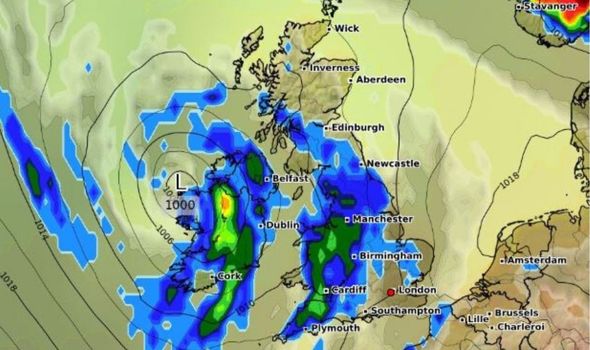 The Met Office has said in its long-range weather forecast from May 28 until June 6: “Through the last week of May, many parts should be dry and settled at first, although thicker cloud is likely to bring some outbreaks of rain to central areas for a time.

“By the end of May outbreaks of rain are expected to affect parts of Scotland and some western areas of the UK, with warm conditions and a risk of thunderstorms breaking out across England ahead of this rain.

“Into next week, the rain across Scotland is likely to move away to the east, allowing dry and settled conditions to build across most parts of the UK.

“Temperatures are likely to be warm and above average in central and southern areas, but cooler in the north.”

But before this unsettled weather, a huge blast of Saharan air is set to turn Bank Holiday Monday into a potential record-breaking scorcher.

BBC Meteorologist Nick Miller said temperatures ciuld surge to as high as the mid-20s in southern England, and the mercury could rise further to around 27C in the south-east on Tuesday.

He told BBC Breakfast: “It is a blustery start to the weekend. We have a lot of rain coming for a lot of us. Large parts of Scotland will see around 100mm of rain in the three-day weekend period.

“If you catch a shower today, it will be heavy and possibly thundery. That is most likely in Scotland and Northern Ireland. 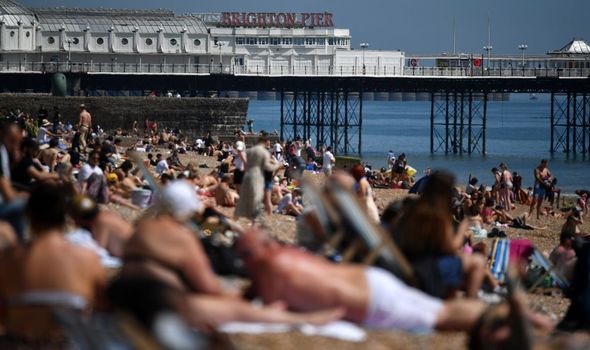 “We have also seen a few thunderstorms in Wales so far this morning. You can also pick out a number of showers across England and Wales this afternoon moving from west to east.

“However, the showers will move quite quickly in these strong, gusty winds, with gusts of 40-50mph today in England and Wales.

“Northern England, Scotland and Northern Ireland will see winds reach up to 60mph, and that could bring some strong waves. It will be close to 20C in the warmest, sunniest parts of southern England today.”

Look ahead to tomorrow, Mr Miller said coulds and winds will “die down” as the weather begins to turn brighter for most of the UK heading into the start of next week.

He said: “As we move through the weekend, high pressure is building up from the south.

“By Monday, there will be a fair amount of sunshine across England and Wales and eastern Scotland.

“Temperatures could reach up to 20 in Northern Ireland and Scotland, but some getting close to mid-20s in southern England.”