BBC Weather: UK set for snow as temperatures plummet to -10

The Met Office has issued swathes of weather warnings for the UK this week up until Saturday. Additionally, an amber snow warning has now been issued by the Met Office for parts of the East Midlands, north-west England and Yorkshire and the Humber on Tuesday. 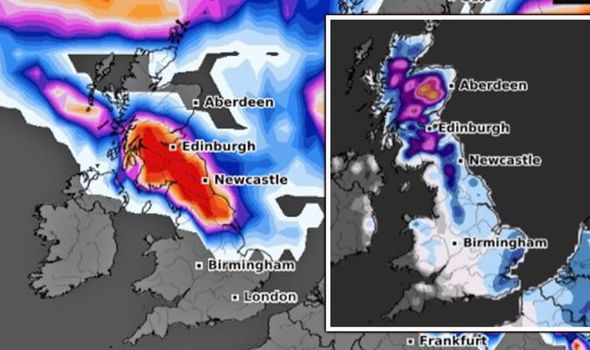 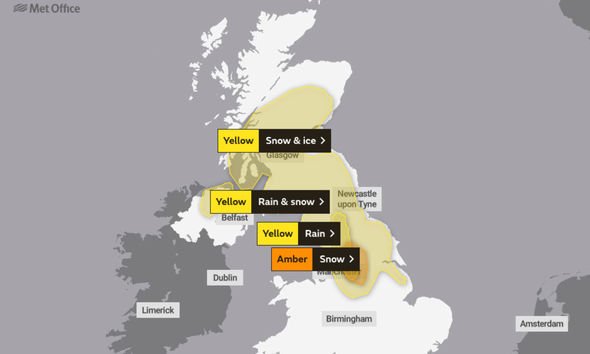 Today (Monday, February 1) a yellow rain and snow warning covers parts of Northern Ireland from 4pm until 12pm on Tuesday.

A yellow snow and ice warning also covers much of Scotland and northern England from 10pm on Monday night until 11.59pm on Tuesday.

An amber snow warning is active from 3am until 1pm on Tuesday, and affects cities such as Sheffield and Leeds.

The Met Office warn as much as 15cm, or approximately six inches, of snow could fall for some areas under warning.

The Met Office warning reads: “An area of snow is expected to move north across northern England during Tuesday morning before easing and clearing from the south into the early afternoon.

Parts of the East Midlands, north-east, north-west and Yorkshire are also under a yellow rain warning from 6pm on Tuesday until 4am on Wednesday.

Several other snow and rain warnings have been issued from Wednesday this week, with the last due to expire on Saturday at 6am.

This is a breaking story, refresh your browser for updates.