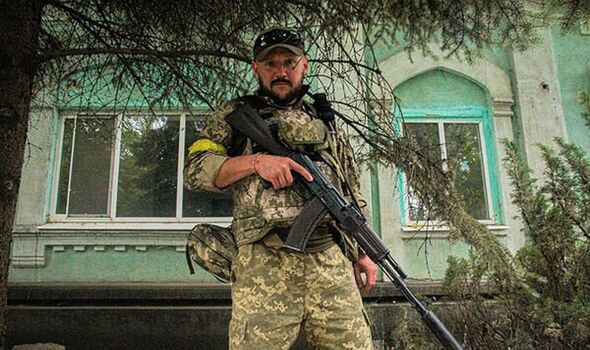 The award-winning makeup artist is now out on the deserted city streets of Slovyansk in the Donetsk region with the territorial defence, escorting volunteers distributing aid.

Vasilev, 43, said: “I made the decision to sign up within the first week of the war. I took the oath and put on the uniform. There is only one motivation in this situation. My country is in war. Like any normal man, I had no other choice.”

He has been honoured in global beauty events, coming fourth place in the Organisation Mondiale Coiffure World Cup in 2017 and third in the Europe Cup makeup awards in 2016.

But Vasilev claimed: “Brush or machine gun? The gun is easier to use. The brushes are left in a past life. The machine gun is more relevant than ever.”

“The danger of being a soldier is obvious, this is war, and not having time to be useful for your country.”

“The worst thing that can happen to a makeup artist is to fall in love with a client.”

His role now has him patrolling combat areas.

Vasilev will accompany aid groups into the warzones of Slovyansk and Kramatorsk, two of the last Ukrainian-controlled cities in the Donbas.

Russian forces are expected to advance to take the region in the coming weeks. If the Kremlin were to occupy both cities, they would essentially control the whole area, providing a big victory for Vladimir Putin’s forces.

Vasilev, who as part of a combat group has taken part in missions from the zero-front line to evacuate civilians, added: “The situation in Donbas is dire.”

“People continue to evacuate. Our group has come under direct fire from the Russians.”

Ukrainian volunteers have told previously that aid convoys have been targeted by Putin’s troops.

But Vasilev insisted: “It will be a battle – but if we get all the weapons that were promised to us, we will win for sure.”