The Government of National Accord says it will recapture city of Sirte, a gateway to Libya’s main oil terminals. 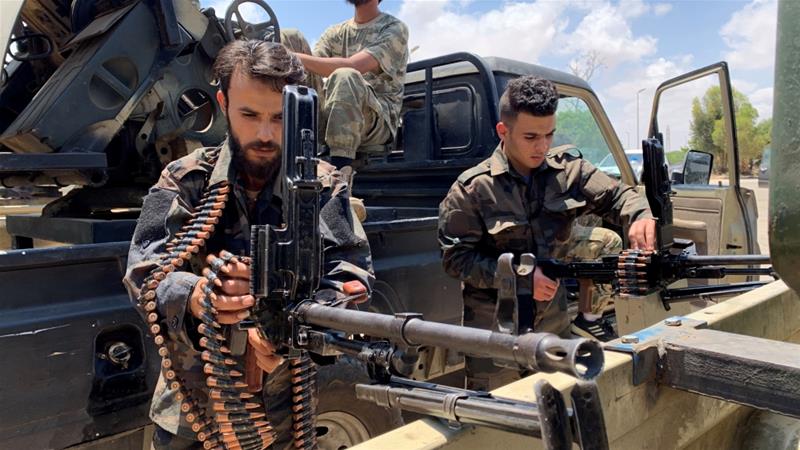 Libya’s internationally-recognised Government of National Accord (GNA) on Saturday moved fighters closer to Sirte, a gateway to Libya’s main oil terminals that the GNA says it plans to recapture from the eastern-based self-styled Libyan National Army (LNA).

Witnesses and GNA military commanders said a column of about 200 vehicles moved eastwards from Misrata along the Mediterranean coast towards the town of Tawergha, about a third of the way to Sirte.

The GNA recently recaptured most of the territory held by the LNA in northwest Libya, ending eastern-based renegade military commander Khalifa Haftar’s 14-month campaign to take the capital, Tripoli, before the new front line solidified between Misrata and Sirte.

Backed by Turkey, the GNA has said it will recapture Sirte and an LNA airbase at Jufra.

But Egypt, which backs the LNA alongside the United Arab Emirates (UAE) and Russia, has threatened to send troops into Libya if the GNA and Turkish forces try to seize Sirte.

The United States has said Moscow has sent warplanes to Jufra via Syria to act in support of Russian mercenaries who are fighting alongside the LNA. Moscow and the LNA both deny this.

The LNA has itself sent fighters and weapons to bolster its defence of Sirte, already badly battered from earlier phases of warfare and chaos since the 2011 NATO-backed uprising which led to the overthrow of longtime ruler Muammar Gaddafi.

Meanwhile, leaders of France, Italy and Germany said in a joint statement on Saturday they were “ready to consider” sanctions on foreign powers violating an arms embargo in Libya.

The statement did not directly name any foreign actors funnelling arms to Libya but multiple powers have been sending fighters and weapons, fuelling a bloody proxy war that reflects wider geopolitical rifts and divisions in the Middle East and within NATO.

“We … urge all foreign actors to end their increasing interference and to fully respect the arms embargo established by the United Nations Security Council,” the statement said.

“We are ready to consider the possible use of sanctions should breaches to the embargo at sea, on land or in the air continue.”

Voicing “grave concerns” over the escalating military tensions in Libya, they urged “all Libyan parties and their foreign supporters for an immediate cessation of fighting and for a stop of the ongoing military build-up throughout the country”.

Also on Saturday, Libya’s National Oil Corporation (NOC) called for the immediate withdrawal of foreign mercenaries from oil facilities in the country.

In a statement, the NOC condemned the deployment of Russia’s Wagner Group and Syrian and Janjaweed mercenaries in Libyan oil installations, most recently at Es Sidra port.

The NOC demands their immediate withdrawal from all facilities, it said, calling the UN to send observers to supervise the demilitarisation in the areas of NOC operations across the country.

There are currently large numbers of foreign mercenaries in NOC facilities who do not share this wish, the statement said.

On Sunday, the NOC accused the UAE of instructing forces loyal to Haftar of disrupting the country’s oil output and exports.

Libya, with the largest oil reserves in Africa, can produce 1.2 million barrels of crude oil per day. However, production has fallen below 100,000 barrels a day due to interruptions by pro-Haftar fighters over the past six months.