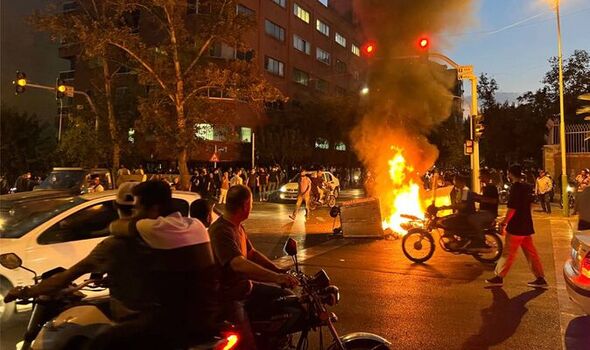 It comes as the Islamic regime faces a fourth week of protests following the death in custody of 22-year-old Mahsa Amini, following her arrest by morality police for wearing her hijab too loosely.

Some 300 protesters have been killed, opposition groups say,  and at least 15,000 arrested since widespread protests began last month. They have now spread to 31 provinces, 164 cities and 16 major universities and show no signs of letting up.

In unprecedented scenes, even Iran’s headline president Ebrahim Raisi was not spared as students at the all-female AlZahra University in Tehran chanted “Raisi, get lost”,

“We don’t want a corrupt regime, we don’t want murderer as a guest” during an official visit yesterday.

The use of ambulances has increased following a spike in protestors targeting police vans to free those who have been arrested. The tactic has been reported in at least ten cities, including Gohardasht, Rasht and, crucially, the holy city of Mashhad.

Last night it emerged that these now include any member of the public caught filming as the regime tries, unsuccessfully, to maintain internet blackouts across the country.

“We have seen ambulances used to transport police officers and we know they are being used to take away protestors,” said one protester in Rasht last night.

“Now we are surrounding these ambulances as well, and freeing those inside.”

On Friday protests and clashes with police flared in Karaj, Isfahan, Ahvaz, Izeh, Shiraz, Islamshahr, Gohardasht and Lahijan,with some protesters chanting: “death to the dictator” and “shame on you! shame on you!”.

Others chanted: “This is not protest, it is a revolution”.

More than 30 UK MPs and peers aligned to the cross-party British Committee for Iran Freedom have now called on Liz Truss’ government to recognise the right of the Iranian people to defend themselves by any means necessary and to overthrow this regime.

Last night the exiled opposition group NCRI/MEK, which is actively supporting demonstrators on the ground,  said the time had arrived for the West to support the wishes of Iranians who want to overthrow the regime.

“Iran is going through a new revolution. Iranians from all walks of life and age groups, are chanting “Khamenei will be overthrown this year,” They want regime change,“ said spokesman Shahin Gobadi,

“It is time that the West in general and the UK in particular side with the Iranian people in their desire for overthrowing the regime and establishing a freely elected democratic republic.

The inalienable right of Iranian people to rebel and fight against the regime and their right to bring about regime change must be recognised.”