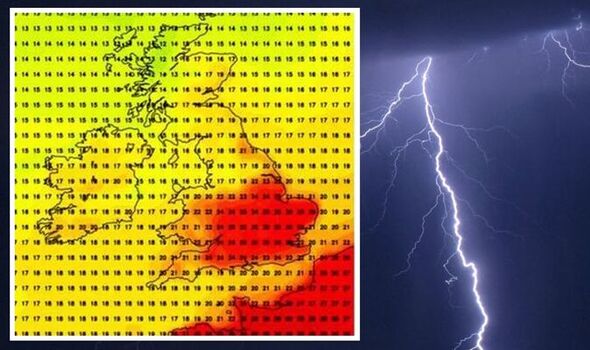 Thermometers will soar past the mid-20Cs across southern and eastern England on Monday as the post-tropical storm brushes the nation.

Where the sun breaks through, ground temperatures could hit 30C–much higher than average for the time of year.

Scotland and northern England will dodge the sweltering plume, and by Tuesday, thermometers will dip nationwide.

The remains of a second ex-hurricane, Earl, will creep towards the UK after Danielle, but rather than unleashing another deluge, it will help build settling high pressure.

Met Office meteorologist Aidan McGivern said: “It will be a breezy start to the week but that breeze, because it is coming around ex-hurricane Danielle, is bringing in tropical warmth.”

“So, for the start of next week it looks quite warm, especially in the east if we get bright spells.”

“If we get a bit of sunshine in the south and the southeast temperatures will get up into the low- to mid-20Cs.”

Computer models, thrown into confusion by the arrival of two ex-hurricanes, suggest high pressure will build after mid-week.

Some forecasters originally predicted low pressure would continue to drive unsettled conditions through to next weekend.

Now they prefer Britain’s weather to settle after Wednesday, with the prospect of further higher temperatures during the day before chilly nights.

“This dry weather may continue for a while, creating further issues with drought, although for many parts of the country the drought will have been alleviated by last week’s rain and thunderstorms.” 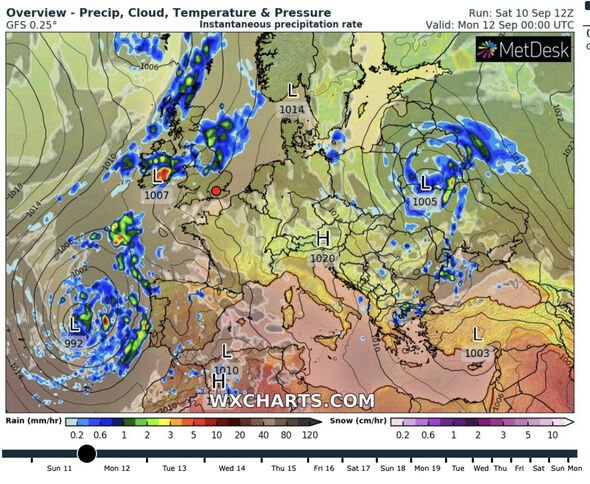 Warm weather from Monday will be a combination of tropical winds circling ex-Danielle and warm air drawn up from the Continent.

However, this will stall over southern England with Scotland and the north reaching only the mid- to high-teens.

After driving an unsettled start to the week, both hurricanes will fizzle over the Atlantic.

The remains of Hurricane Earl will link with a weak jet stream as pressure rises over the Atlantic ahead of next weekend before pushing into Britain.

Instead of an early autumn storm hammering, Britons can look forward to a settled run up to the middle of September. 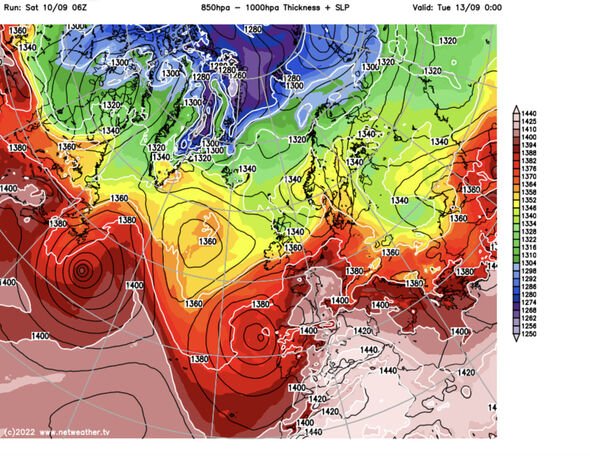 Jim Dale, meteorologist for British Weather Services, said: “Both hurricanes are going to end up as a bit of a damp squib in the Atlantic, with neither really making it to the UK.”

“Danielle will push southwards at the start of the week, while Earl will die out over the Atlantic and will instead encourage a region of high pressure to build which could encroach into the UK.”

“What this means is that after a warm start to the week, with temperatures pushed up by air pulled in from the south, it will then turn cooler and drier, and largely settled.”

Showers will set in through today, turning heavier in Scotland and Northern Ireland tonight, according to the Met Office.

Temperatures will also start to rise, hitting the low-20Cs in parts, according to Met Office meteorologist Aidan McGivern.

He said: “A lot of places will see sunny spells on Sunday, and one or two showers can’t be ruled out.”

“Later, parts of western Scotland and Northern Ireland will see some outbreaks of heavy rainfall.”

“Temperatures will reach the high teens and low-20Cs, and the rain towards the west and northwest will move across Scotland and Northern Ireland on Sunday night.”

“These will clear to showers on Monday and eventually end up in the south on Tuesday.”