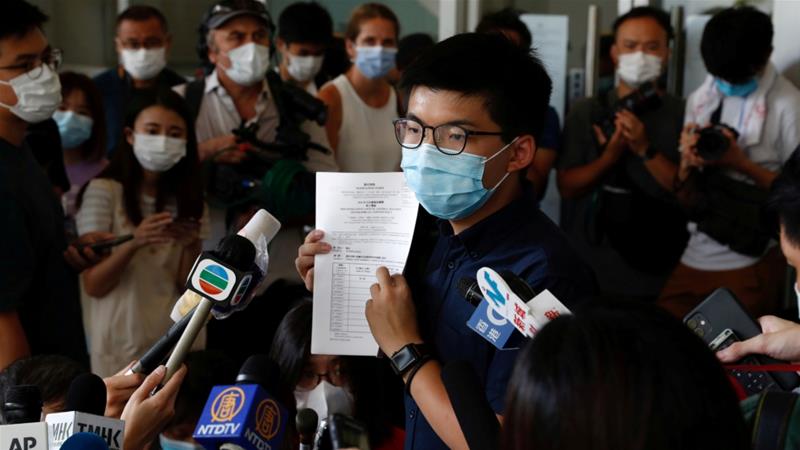 Prominent activist Joshua Wong and 11 other opposition figures have been barred from running in Hong Kong’s upcoming legislative elections, a move they decried as the latest assault on China’s critics in the semi-autonomous city.

The government of Hong Kong, in a statement on Thursday, said electoral authorities had disqualified the 12 nominees for failing to demonstrate their intent to support and promote the territory’s mini-constitution, or Basic Law.

Advocating for independence, soliciting intervention by foreign governments, or “expressing an objection in principle” to a national security law that China imposed on Hong Kong earlier this month are behaviours that “could not genuinely” uphold the Basic Law, the statement said.

It added that the Hong Kong government supported and agreed with the decision and warned more nominees could face a similar fate in the near term.

Wong confirmed his disqualification in a post on Twitter, saying he was barred for describing the new national security law as “draconian”.

The barring of opposition candidates amounted to China’s “biggest-ever crackdown” on an election in Hong Kong, he said, adding the move targeted “young progressive groups to traditional moderate parties”.

He added that “clearly, Beijing shows a total disregard for the will” of people in Hong Kong, “tramples upon the city’s last pillar of vanishing autonomy” and attempts to keep the city’s legislature “under its firm grip”.

Ho was told that “such an unequivocal expression” against the national security law “casts serious doubt on whether the candidate embraces, promotes, and supports the fundamental principle of ‘one country, two systems’, and therefore objectively has the genuine and true intention to uphold the Basic Law at the time of the nomination”, according to the SCMP.

China had introduced the new legislation in Hong Kong on June 30, seeking to punish what it termed secession, subversion, terrorism and collusion with foreign forces. The law, which bypassed Hong Kong’s legislature, followed months of pro-democracy protests last year that at times descended into violence.

Critics of the law describe it as an assault on Hong Kong’s autonomy and freedoms, assured under the “one country, two systems” framework set in place when the city was returned by the United Kingdom to Chinese rule in 1997. But supporters say it will bring stability after a year of anti-China unrest.

The government statement said other improper behaviour that could disqualify nominees included intentions to vote down government proposals “indiscriminately” to force it to accede to other political demands and a refusal to recognise China’s sovereignty over Hong Kong.

But there was “no question of any political censorship, restriction of the freedom of speech or deprivation of the right to stand for elections as alleged by some members of the community”, it said.

The disqualifications mark a major setback for the pro-democracy campaigners, who had been hoping to win the first-ever majority in Hong Kong’s Legislative Council, known as LegCo. It came hours after four students, aged between 16 and 21, were arrested for social media posts that were deemed to breach the new security law.

The four were all former members of Student Localism, a pro-independence group that announced it was disbanding its Hong Kong branch the day before the security law was enacted.

Police said they were arrested on suspicion of organising and inciting secession through comments made on social media posts after the law came in.

Student and rights groups condemned the arrests, saying they heralded the kind of political suppression ubiquitous on the Chinese mainland.

“Hong Kong has fallen into the era of white terror,” the Student Unions of Higher Institutions, which represents 13 student unions, said in a statement overnight, referencing a Chinese idiom to describe political persecution.

“It is crystal clear that more and more Hongkongers [will] have to endure … Communist terror,” it added.

At least 15 people have now been arrested under the new law.

Nathan Law, a democracy activist who went into exile after the law was imposed, expressed similar sentiments on Twitter.

“The Chinese Communist Party’s strategy is apparently aiming to suppress all forms of resistance in Hong Kong with huge fear and intimidation,” he wrote.