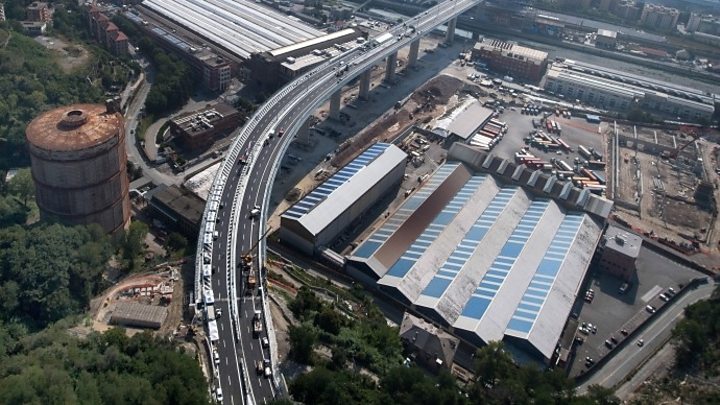 Renzo Piano peers up at his creation – an elegant sweep of steel and concrete spanning more than a kilometre.

“When you finish a job there is always a mix of feelings,” the 82-year-old world-renowned architect muses. “Satisfaction but also a bit of sadness too, because it’s no longer your building – it belongs to everybody.”

We speak beneath the hull of his soaring new bridge crossing the Polcevera river in Genoa, his design echoing a giant ship. It is being readied for its inauguration almost two years since its predecessor collapsed, killing 43 people: one of the worst infrastructure disasters in modern Italian history.

“I feel pride on one side but at the same time this bridge is born of tragedy. And this will never be forgotten.”

On 14 August 2018, a heavy storm engulfed Genoa. The Morandi bridge, crossing the Polcevera river in the centre of the city, was busy as ever, forming a vital section of the highway system connecting France and Italy.

Named after its engineer, Riccardo Morandi, the iconic bridge was a feat of Italian architecture when it opened in 1967. It used an innovative technique to encase steel supports in concrete and became a landmark for the port city.

At 11:36 in the morning on that fateful day, a steel-enforced concrete cable stay broke and collapsed, taking a supporting tower and a 210m (690ft) section of the bridge with it. Vehicles cascaded to the ground. Apartment blocks beneath were crushed.

Renzo Piano, a native of Genoa whose designs include The Shard in London and Paris’s Pompidou Centre, was working in Switzerland at the time.

“When I got the news I was paralysed”, he says. “The Morandi bridge was for me a fantastic, brave example of engineering, beautiful – everybody loved it. But everybody was also a bit frightened by the fragility of the bridge.”

Cracks in the concrete meant that the steel inside the bridge began corroding soon after construction. By the late 1990s, the damage was so bad that Autostrade per l’Italia, the company managing most of Italy’s motorways, began to refurbish it.

But Autostrade, which had been privatised and sold to the Italian fashion giant Benetton, failed to repair the pylon that subsequently collapsed. Another company, Spea, was in charge of inspecting Italy’s infrastructure. It too was owned by Benetton.

The accusation is that conflict of interest mixed with serial neglect led to an avoidable disaster. Autostrade and Spea deny culpability. Autostrade will now be renationalised and forced to pay compensation.

The preliminary investigation into the cause of the collapse, focusing on 71 civil servants, employees of Autostrade and Spea, should finish by the end of the year. That will form the basis of a trial, with charges announced including multiple manslaughter.

“This bridge is a place with light and breeze, but at the same time very strong: this is in some way the character of Genoa,” he says.

But for the relatives of the 43 people killed, its construction cannot heal the wounds.

On 14 August 2018, Giorgio Robbiano was at his father’s house, waiting to celebrate the birthday of his brother Roberto, who was on his way with his wife Ersilia and their son Samuele. Unusually, they were late.

“When I got the news that the bridge had collapsed, I just knew that they were there,” Giorgio says.

By the time he arrived at the hospital, all three bodies had been identified. Samuele, aged eight, was the youngest victim.

“The worst thing was to tell my father that his son was dead,” Giorgio tells me. “At first I couldn’t do it and I lied to him and said ‘they’re fine’ but inside I was crying. I feel like my heart is split in two and one part is missing. My father doesn’t want to live any more.”

Giorgio points out the names of the three in a memorial garden built beneath the bridge, with 43 different trees for each of the dead.

“This new bridge is nothing to celebrate”, he says. “It is just made with the blood of my brother, my nephew, my sister-in-law and another 40 people who lost their lives.”

The need for justice is acute here. That, says Stefano Puppo, a state prosecutor in Genoa, is “absolutely understandable – and they want it quickly.” And in a country where the legal machine moves notoriously slowly, he believes there will be accountability.

“I want to assure people we’re doing our utmost to deliver it, with all the resources and the latest technology we have: for the sake of those who lost their families, homes, work – and for the whole community of Genoa,” he says.

But the reconstruction has come faster than justice. It took just a year to build the new bridge from scratch, with work continuing even while Italy was floored by coronavirus. Infrastructure projects here usually stretch for years.

“It’s a miracle – but it’s not,” says Renzo Piano. “If pride and knowledge get through complexity and bureaucracy, it’s possible. Italy is able to do these kinds of things. But I don’t understand why this simply becomes possible when you have a tragedy.”