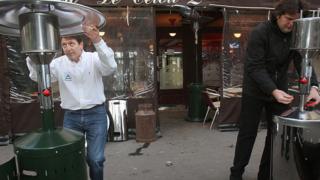 France’s government has announced new environmental measures, including a ban on heated terraces for cafes and bars.

The ban will not come into force until after the winter as restaurants have been hard hit by Covid-19, she added.

All heated or air-conditioned buildings open to the public will also have to keep their doors closed to avoid wasting energy.

Ms Pompili told reporters it was wrong for shops to “air-condition the streets” in summer by keeping their doors open just to spare customers from having to open them.

“Neither should terraces be heated in winter so people can feel warm as they drink coffee,” she said.

Trade groups say more than 75% of restaurants and cafes in the Paris area have a heated terrace.

A few French cities have already banned them but Paris Mayor Anne Hidalgo refused to do so, saying it would be too much of a blow to businesses.

Ms Pompili said officials would talks to owners about ways of implementing measure after the winter.

She was appointed by new Prime Minister Jean Castex, who has pledged €20m ($23m; £18.2m) for climate-related investment, as part of a €100m stimulus plan aimed at helping the economy recover from the coronavirus pandemic.

The measures announced by Ms Pompili were proposed by the 150-member Citizens’ Convention on Climate, set up by President Emmanuel Macron last year and randomly selected from members of the public.

They also include the creation of two natural parks and a national nature reserve.

Owners of buildings will be encouraged to improve insulation and banned from installing new coal- or oil-burning furnaces, while limits will be imposed on developments in rural areas.