12:37 GMT – It has been almost one month of fighting and a lot has happened…

…so we have put together an explainer for you. Here are five key things to know about the crisis.

Nikol Pashinyan has said there is no room for a diplomatic solution at the moment, according to Reuters.

But he also told Iran’s IRNA news agency that he welcomed any constructive measure initiated by Tehran to establish peace and stability in the region.

“On October 21, at about 12:00 pm local time (8.00 GMT), another UAV belonging to the Armenian Armed Forces was destroyed by our Air Defense Units over the Horadiz city,” the ministry said in a statement.

The forces had also destroyed two Armenian drones on Tuesday, one over Azerbaijan’s second-largest city of Ganja and the other over the Goranboy region, according to the ministry.

Ararat Ohanjanyan, an ethnic Armenian health official in Nagorno-Karabakh, on Monday said local medical workers had no time or resources to deal with the outbreak for the first two weeks after the latest escalation of fighting started on September 27.

“For about 10 days during heavy shelling of Stepanakert we didn’t have time to track down those infected patients, and it allowed contagion to spread in quicker than usual. However now the situation will be under control,” he said.

Ohanjanyan said medical facilities in the region were overwhelmed with those wounded in the fighting.

09:13: GMT – Armenian, Azeri foreign ministers in Moscow, prepare for US talks on Friday

The foreign ministers of Armenia and Azerbaijan were in Moscow on Wednesday for meetings with Russia’s top diplomat Sergey Lavrov.

The ministers were visiting the Russian capital, their respective ministries said as the pair are due to meet US Secretary of State Mike Pompeo on Friday.

They have ruled out a trilateral meeting and will meet Pompeo separately.

Azerbaijani Foreign Minister Jeyhun Bayramov arrived in Moscow for “consultations with the Russian side”, the ministry said in a statement.

His Armenian counterpart Zohrab Mnatsakanyan was set to meet Lavrov in Moscow “to discuss the situation in Karabakh and the implementation of a ceasefire agreement”, ministry spokeswoman Anna Nagdalyan said.

It was not immediately clear if the two diplomats would meet Lavrov jointly or separately.

Azerbaijan President Ilham Aliyev on Tuesday said the Azerbaijani army had taken control of the Zangilan area and other settlements in Nagorno-Karabakh.

“The victorious Azerbaijani army is gaining new victories on the battlefield. These victories make every Azerbaijani citizen happy,” he said in a televised address. 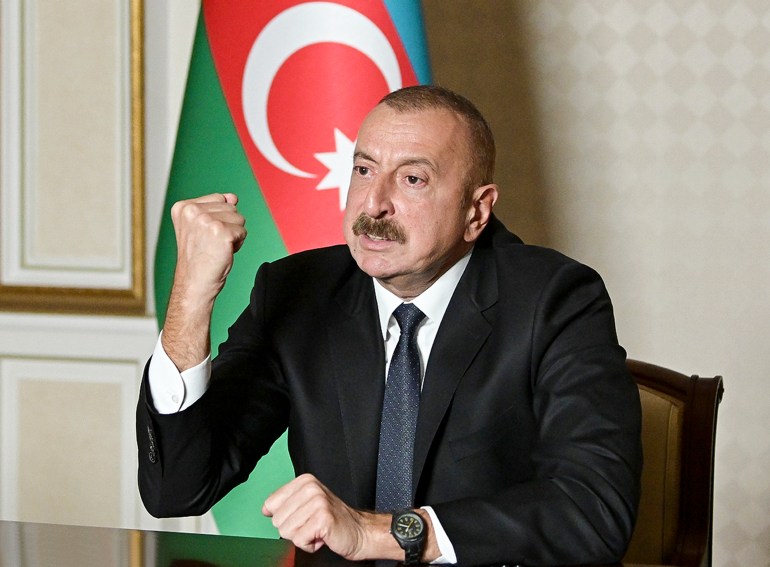 Fighting continued in Nagorno-Karabakh on Tuesday night and Wednesday morning according to Armenia and Azerbaijan.

Azerbaijan authorities claimed its army was advancing in the Jabrayil and Gubadlin directions causing deaths among the Armenian army and capturing its military equipment.

Video footage shared by the Azerbaijan Ministry of Defence showed heavy artillery and rockets being fired by Azerbaijani forces.

Armenian President Armen Sarkissian has left for Brussels to discuss the Nagorno-Karabakh conflict with NATO and European Union officials, his office said.

Armenia expects NATO and EU leaders to do “everything possible” to stop the fighting and to “bring to life” a ceasefire deal, it said.

Good morning. Usaid Siddiqui in Doha and Anealla Safdar in London will be bringing you the latest updates on the Nagorno-Karabakh crisis today, Wednesday, October 21.

Here is a quick recap:

Fighting in Nagorno Karabakh has spilled into a fourth week, with no sign of a let-up as Armenia and Azerbaijan continue their clash over the disputed region despite two attempts at a humanitarian truce.

The two sides accuse one another of causing civilian and military casualties. To date, at least 63 Azerbaijanis have died and 36 ethnic Armenians, along with hundreds of soldiers.

The Armenian president will be in Brussels on Wednesday to discuss the conflict with NATO and EU officials. More on that later.