Home » World News » Fighting for survival, babies in the bunker 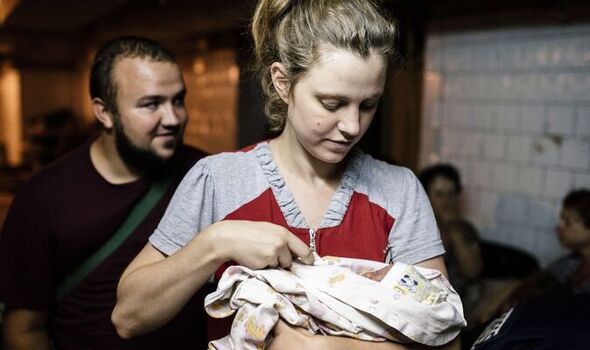 Staff and parents tend to the infants at the medical complex in Saltivka, a residential district of heavily shelled Kharkiv. Residents of the northern city – Ukraine’s second-largest metropolis of nearly 1.5 million people – have had to seek shelter from the escalating conflict.

A hospital spokesman said: “We have an oxygen concentrator – our kids need oxygen. The light is supplied by a self-made device, but everything is very reliable.”

The doctors and nurses have been in the basement location for five days with pregnant women, mothers and newborns.

Meanwhile, cancer-stricken children forced to hide in another hospital basement face a terrifying treatment timebomb, doctors warn – as the bombarded building is running out of life-saving chemotherapy drugs.

Medical staff at Okhmadet Children’s Hospital, in the capital Kyiv, have been forced to usher sick and terminally ill children into the basement as the war rages.

One artillery strike there last weekend claimed the life of a six-year-old boy.

Dr Lesia Lysytsia warned: “If the children’s cancer treatment is interrupted further they will die.

“These children suffer more because they need to stay alive to fight with the cancer. This fight cannot wait.”

“Eventually we will calculate how many people died in attacks.”

The mum of two has been living in the hospital with her physician husband Oleksandr, her two daughters, aged two and five, and their babysitter since the second day of the war.

At first, she worked in the hospital while her children stayed in a city bomb shelter. But being separated was too stressful so they brought their girls to the hospital.

Dr Lysytsia said about one-third of staff are living at the hospital.

It tried to evacuate as many patients as possible to Lviv, in western Ukraine and to Poland, but some patients cannot be moved as they are either too ill or needing 24-hour drug treatment.

Routine surgeries have been suspended, and they cannot perform life-saving organ transplants as roads in and out of the hospital have been destroyed. They have had to cancel three stem cell transfusions, as the donor marrow cannot be delivered from Germany and Poland.

Dr Lysytsia added: “Patients and their parents ask me if it’s safe. I don’t know if it’s safe to go outside.”

Dozens of babies and sick children are crammed into the basement bunker, designed by Soviet engineers in the 1970s to withstand potential ColdWar battles.

The walls are thick but the shelter is basic with no beds for the adults, or chairs or tables.

Down syndrome patient Nikita Synytsky, four, has leukaemia. He clings to his mother Tatiana and grinds his teeth – an anxiety response she says started when the invasion began. His treatment cannot be halted and Tatiana, exhausted and worried, says: “We are very nervous.”

When it is time for Nikita to receive treatment or an assessment, his mother has to climb several flights of stairs to the ward where they usually stay.

Asked how she felt, Tatiana said: “Hands are trembling, legs are like in fitness, 10,000 steps a day, up and down, with children and bags.”

Nikita needs chemotherapy and blood transfusions. Tatiana added: “As parents, we try to give our blood and change between parents and give blood for our children.”

Dr Andrey Vysotskyi, 34, head of the emergency unit, has barely slept in six days. “In one moment, it changes.This is war.”

He said the site of his new makeshift department used to be “the quiet place with just kids with scheduled operations” as he gestures around what has become a hectic triage assessment area.

Three children were rushed to the facility last weekend – all with gunshot injuries. One – a 10-year-old boy – died en route. The shattered medic explained: “They were in the ambulance and the ambulance was under gunfire.”

A 14-year-old boy had injuries to his face, back and legs. Dr Vysotskyi said: “We are not sure about his condition. He is stable.”

The third victim was a girl who had a gunshot wound to a finger.

The dire situation is the same in other key Ukraine medical bases.

Julia Nogovitsyna, programme director at Ukraine cancer charity Tabletochki, said medics were trying to transfer those who can be moved to the Western Ukrainian

Specialised Children’s Medical Centre in the safer city of Lviv. Thirty-four patients were taken there by bus on Monday before being escorted to the Polish border.

One couple making their way to the border with a 37-day-old baby girl told reporters she had been born with leukaemia.

Ms Nogovitsyna revealed: “She is the most difficult one. I don’t know how she will survive this.”

Ukrainian experts now fear for the country’s 7.5 million children – with a generation of youngsters at risk of diseases being left undiagnosed in years to come, due to the invasion forcing medical centres and hospitals to close.