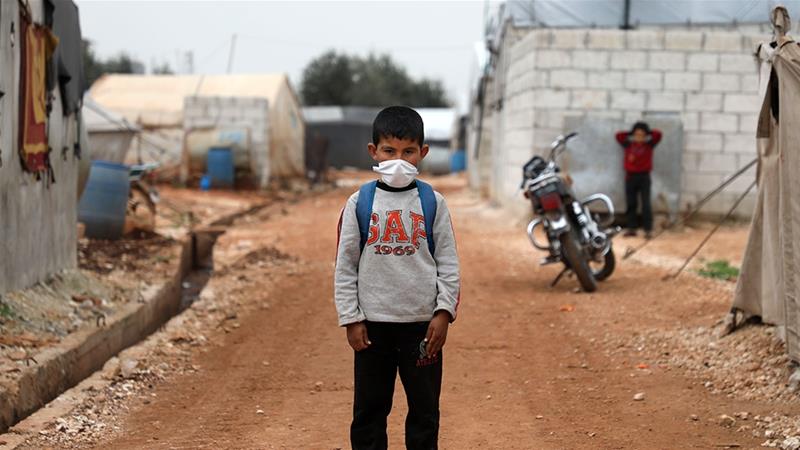 Health officials in war-battered Syria have announced the first case of COVID-19, the disease caused by the new coronavirus, as authorities in the country prepare to halt all public transportation in a bid to curb the spread of the virus.

Health Minister Nizar Yazji told a news conference in the capital Damascus on Sunday that “necessary measures” had been taken to ensure that the patient, a 20-year-old woman who had come from abroad, was quarantined for 14 days.

Yazji said the patient did not exhibit all of the symptoms upon arrival, but was identified by a “detection team” responsible for scanning incoming travellers, state news agency Sana reported.

Syria’s healthcare system, among other infrastructure, has been ravaged by nine years of war.

On Sunday, Syrian President Bashar al-Assad issued a prisoner amnesty, according to state media, which said it was a move to relieve congestion that risked the spread of the virus.

Bakeries across the country would no longer open and bread would be home-delivered, state media said.

Medics say the country is also vulnerable with thousands of Iranian-backed militias fighting alongside Assad’s forces, who maintain a strong presence in Syria’s big cities and have their headquarters in the Damascus Shia suburb of Set Zaynab.

Iran, one of the countries most affected by the pandemic outside China, is Syria’s main regional ally and operates military and civilian flights that bring the militia fighters into the country.

Iran’s Mahan Air still has regular flights from Tehran to Damascus, according to Western diplomats tracking Syria, even though other Syrian flights have been suspended.

Iranian-backed militias also still enter Syria using the al-Bukamal border crossing with Iraq, where the virus is spreading, according to local residents and Western intelligence sources.

The army’s general command announced on Saturday it had raised the level of preparedness in military hospitals and gave orders to minimise gatherings, including military sports activities or any that take place in closed areas.

UN officials and humanitarian workers, meanwhile, fear a large outbreak in Syria could be particularly catastrophic.

Medics in the opposition-controlled northwestern region – the last rebel-held bastion in the country – also fear the coronavirus could spread quickly in crowded camps for tens of thousands of displaced Syrians who fled months of relentless Russian-backed bombing of rebel-held areas.

Since December last year, and up until earlier this month, an escalation in fighting between Syrian government forces, backed by Russia and Iran, and the Turkish-backed opposition in the region displaced nearly one million people, many of whom amassed in the already overcrowded camps near the Turkey-Syria border.

Aid agencies have been unable to respond to the overwhelming surge of new arrivals at the camps, which has forced many to share their tents throughout the harsh winter months, while others camped under trees or in their vehicles.

A campaign to help spread awareness among the camp’s residents kicked off last week but limited access to running water, pharmacies and medical facilities mean displacement camps are more susceptible to the spread of the highly infectious virus.

The area is especially vulnerable as most hospitals and medical facilities have been bombed, rendering them out of order.

The UN has previously accused Syrian government ally Russia of deliberately hitting civilian infrastructure, including hospitals, acts that could amount to war crimes.