Brussels chiefs are under pressure after it emerged EU institutions are struggling to coordinate their measures against the killer coronavirus, which continues to grip the world. The chaos has led to the EU Parliament, EU Commission and EU Council all taking different preventative measures to protect their staff from catching the COVD-19 virus.

The uncoordinated response comes despite all three institutions reporting coronavirus cases, with six employees infected with the disease at the Commission, three at the Council and one at the EU Parliament.

As the coronavirus outbreak hit Europe, the EU Parliament stepped up its fight with 70 percent of staff told to work from home from March 8.

Daniel Caspary, an MEP from the European People’s Party, urged the bloc to take a “united” approach to tackling the virus. 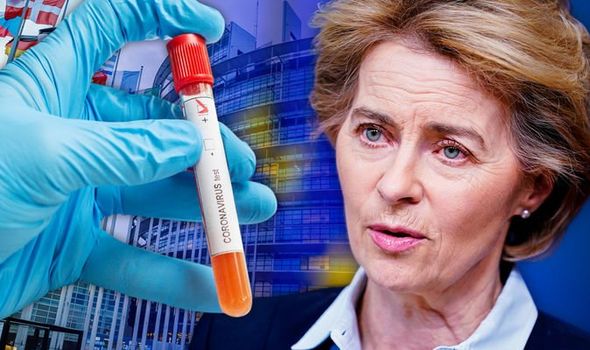 He said: “I would be delighted if the European institutions were to take a united approach to the issue.

“The situation in which people who came back from yellow and red areas had to go to work in the Commission and the Council while Parliament told their staff to stay home was not very helpful.”

Employees with “pre-existing health conditions, people over 60 and pregnant women were advised to “telework”, according to politics news site, Politico.co.uk.

But staff at the Commission have only just started to telework and asymptomatic staff who hadn’t travelled to infected areas were ordered to come into work.

The Commission only moved to remote working when schools across Europe, including Italy and Germany, shut down.

Announcing their decision to cancel non-essential trips, Commission President Ursula von der Leyen sent an email to staff, saying: “We have increased the use of teleworking and videoconferencing.

“We give full support to parents and staff that care for family members, through flexible working arrangements.

Meanwhile, staff at the EU council are still working in the office and holding meetings, albeit “reduced”.

The council said: “All teleworking requests from staff members should be addressed in a favourable manner by line managers.”

The news comes after it emerged the deadly virus has sparked major disputes across Europe with nations on the continent keen to protect themselves.

Diplomatic spats have broken out between Germany and Switzerland and Austria and Italy as leaders attempt to do all that they can to stop the fatal disease spreading in their country.

But tensions have reached boiling point as nations appear to drop their “European solidarity” and look out for their own in a desperate bid to tackle the coronavirus.