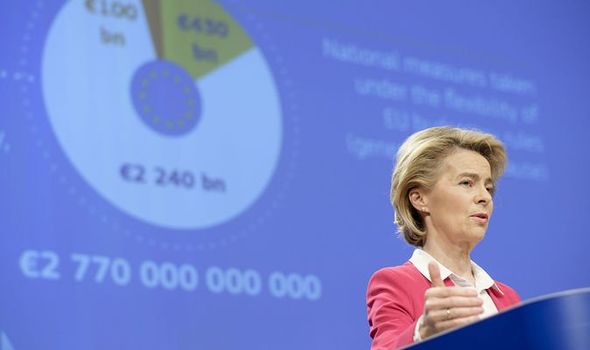 Frau von der Leyen said in an op-ed piece published in French newspaper Le Monde: “Europe was initially destabilised by an unknown enemy, and, it must be said, a crisis of unprecedented scale and speed. This false start is still hurting us today. But Europe is now standing tall and united. And that is being driven by a surge of compassion across the union.”

She added the pandemic had “turned our world upside down”.

But we are all “part of the solution,” she insisted: “It is not just the virus that is contagious; solidarity, too, is infectious. [Solidarity] is at the heart of Europe and is what will allow us to bounce back.”

Before adding: “The real Europe is back. The one that works together to do what none of us could do alone.

“The EU is now delivering and is working flat out every day to save every life we can, to protect livelihoods and kickstart our economies.”

Frau von der Leyen also said the next EU budget should take the form of a “massive Marshall Plan” to “lift” the bloc’s economy “out of the crisis valley”.

She said: “At the heart of [this plan] should lie a powerful new EU budget. The advantages of this are obvious: the EU budget is a proven instrument of solidarity and modernisation… A Marshall Plan of this nature will help build a more modern, sustainable and resilient Europe.”

The Marshall Plan, or European Recovery Program (ERS), was a US aid programme for Western Europe from 1948 to stimulate recovery after World War 2.

In what appeared to be a thinly veiled reference to the lack of European solidarity in the early days of the health crisis, she said: “I have no doubt that before long Europe will be back up on its feet. Together.”

European officials have come under fire in recent weeks for their failure to come up with a common response to curb the pandemic.

Last week, Frau von der Leyen tried to paper over the cracks, calling for more solidarity at the EU level to fight the health emergency and warning that differences between member states were putting everyone at risk.

In a letter published in Italian daily La Repubblica, she said too many EU nations had focused on their own problems when the virus first took hold, which she said “was harmful and could have been avoided”.

She said in the letter: “Only solidarity will allow us to emerge from this crisis. The distance between European nations … puts everyone at risk.”

The flu-like disease has killed more than 45,000 people in Europe, around 85 percent of them in Italy, Spain, France and Britain, according to AFP.