Home » World News » Building a Juneteenth Menu for the 21st Century, One Recipe at a Time

The cookbook author Nicole Taylor reflects on her journey to create a collection of Juneteenth recipes that revel in the breadth of the African American experience.

On June 19, 1865, more than two years after President Abraham Lincoln signed the Emancipation Proclamation, Maj. Gen. Gordon Granger arrived in Galveston, Texas, and issued General Order No. 3, informing the people of Texas that all enslaved people were now free. For the more than 250,000 enslaved Black Texans, the impact of the order was not immediate; some plantation owners withheld the information, delaying until after one more harvest season. But a year later, in 1866, unofficial Juneteenth celebrations began in Texas.

I’ve celebrated Juneteenth with the brightest people in the culinary space at a Soul Summit, a symposium founded by the editor and author Toni Tipton-Martin in Austin, Texas, that celebrates the food history of African Americans; in New York, on a rooftop with my dearest friends; and in Georgia, tucked in the woods with humidity enveloping the guests. I’ve sat under my carport with chipped paint overhead and mosquitoes buzzing around a plethora of foil-covered foods: plump supermarket-bought Italian chicken sausages, buttery sweet poundcakes, pork ribs bathed in smoke and spices and summery salads of heirloom tomatoes and roasted eggplant. 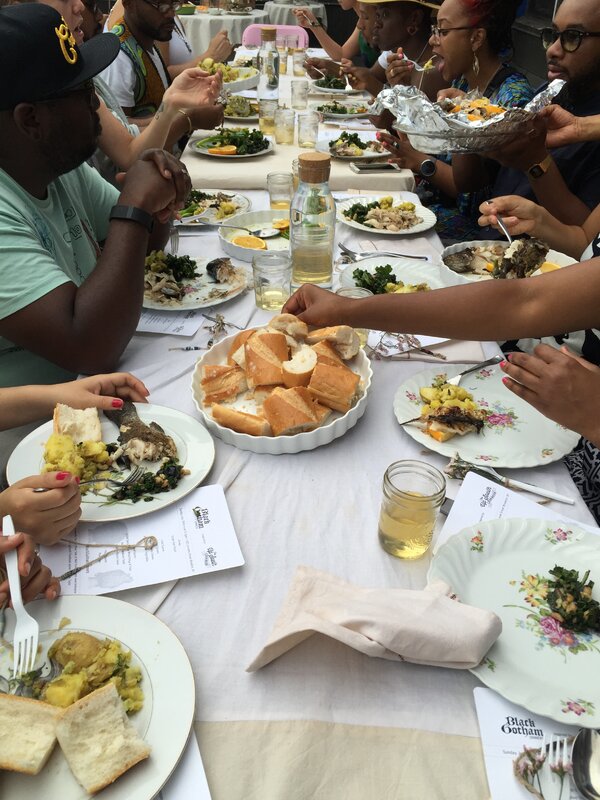 I’ve hosted plated dinners with ceramic platters loaded down with whole roasted fish and summer bean salad, then carefully passed around a table draped in tea-dyed linens, accompanied by rum-spiked red punch. One year, I hosted a pop-up at Pelzer’s Pretzels, a now-closed small-batch pretzel company, and served root beer floats drizzled with caramel and studded with pieces of Philadelphia-style pretzel, and another time I organized a neighborhood dinner and farm tour for Brownsville Community Culinary Center and Café. Guests feasted on Gullah Geechee classics like red rice and okra stew. Each of these celebrations was a time to block out the extraneous noise of the workaday world and feast on food and freedom. Through the years, Juneteenth has become my annual tradition, even when I am miles away from the places I call home.

Like the Great Black Migration itself, Juneteenth traveled aboard trains and automobiles from its Texas birthplace to every state in the Union where Jim Crow was not the de facto governor. Daniel Vaughn writes in a 2015 Texas Monthly article about Juneteenth barbecue: “Barbecue wasn’t the only item on the menu. The middle of June being the beginning of watermelon season in Texas, that also found a spot at the table. The Galveston Daily News reported on celebrations across the state in 1883 including one in San Antonio where ‘twenty-three wagons loaded with watermelons … were destroyed with marvelous rapidity.’ By 1933, the menu had been cemented per The Dallas Morning News. ‘Watermelon, barbecue and red lemonade will be consumed in quantity.’”

Hidden within the Juneteenth story are small moments of personal triumph that we will never know about. The entire society was transformed by emancipation, but how did it affect individual lives? Noisemaker-worthy celebrations are often followed by quieter victories.

My great-grandfather George Taylor left Oconee, Ga. — a town almost 10 miles south of the University of Georgia, named after the Oconee branch of Creek Indians or Muskogean tribe — for a more prosperous future in Athens, Ga., and my great-aunts, two aunts and uncle mostly stayed close. Then Hubert “Boley” Taylor, a Korean War veteran, married Mildred. They gave birth to my mother.

My mother, Janis Marie Taylor, graduated from high school in 1972 and voted for the first time in that year’s presidential election (a victory her own mother never experienced). She made a living as a chicken factory worker. Forty-plus hours a week, dismembering chickens; rest was a luxury. In one day, I probably take as many coffee breaks and rejuvenation breaks as she got in a week. My midday lunches can take two hours or more sometimes. My mother showed me how to hustle; my experiences are teaching me it’s fine to pause.

Even so, I’m unlearning the urge to plow through the day and rush on through to the next one. I pause.

In the stillness, I connect with my whole self in ways my ancestors were not allowed. No space was held for them; their blue-collar jobs didn’t include a lactation room, time off to vote, an atmosphere to speak openly about anxiety or hold a birthday lunch with cake and candles. I set my weekly intentions knowing that my responsibility is to remember to fill my heart with gratitude, to say my ancestors’ names when the room is full and when nobody’s listening.

Even on the days that are not demarcated as holidays or holy days or special days, we should do special things for ourselves and the ones we hold dear. These small everyday traditions, these molecules of the ordinary, can have power and meaning, if we allow them to. Rituals of leisure and care are as much a testament to what Juneteenth has made possible as voting rights and desegregated buses are. It’s these rituals that I want my son, Garvey, to embrace and feel and understand as important components of the legacy of Juneteenth.

This article is excerpted from “Watermelon and Red Birds: A Cookbook for Juneteenth and Black Celebrations” by Nicole A. Taylor (Simon & Schuster, 2022).

Juneteenth is a great opportunity to support the growing number of Black winemakers in the United States and throughout the world. The color red is associated with Juneteenth, and this chicken dish, with its sweet glaze, will go beautifully with a rich red wine. I would be drawn particularly to fruity reds like zinfandel, grenache and pinot noir. California is producing some excellent grenache-based wines, full of fruit flavors yet focused and restrained. And plenty of zinfandels combine spicy fruit flavors with manageable levels of alcohol, which, for zin, means under 15 percent. Brown Estate in Napa Valley makes an excellent zinfandel, and André Hueston Mack offers a selection of delicious wines from Oregon under the Maison Noir label. ERIC ASIMOV