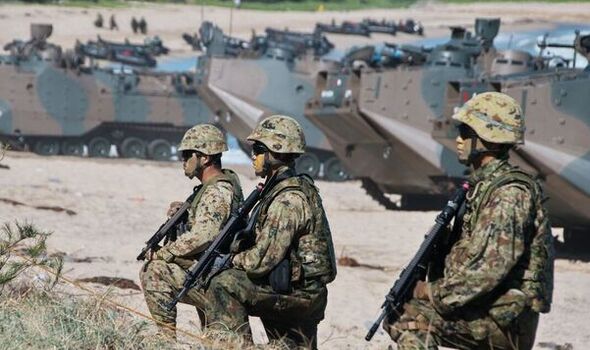 Exercise Keen Sword, which includes 36,000 military personnel, 30 ships and 370 aircraft, is usually intended to test how well US and Japanese naval forces work together.

But this year, the 10-day show of naval power included HMS Spey, one of two Royal Navy patrol vessels on a long-term mission to the Indo-Pacific.

Following an increasing threat from China, Tokyo is slowly shifting from its post-war defence posture as it strives to become less reliant on the US for protection.

It emerged last week that Japan, the world’s third biggest economy, is in the final stages of talks with the UK and Italy to jointly develop and build its new generation fighter jet, expected to be operational by 2035.

Former First Sea Lord Admiral Lord West last night backed Britain’s involvement in Keen Sword. He said: “We have to show China there is a whole group of nations which still do believe in the international order and are willing to work together to prevent any one nation breaking that order.” He added: “This is the important message this exercise sends.”

After leaving a base in Yokosuka, near Yokohama in central Japan, the Spey sailed with amphibious landing ship JS Kunisaki to link up with the main task group.

In one of the region’s largest gatherings of military naval hardware in recent years, 20 warships took part in a full-scale amphibious assault.

They were spearheaded by a Japanese attack sub and flanked by the US carrier USS Ronald Reagan and helicopter destroyer JS Izumo.