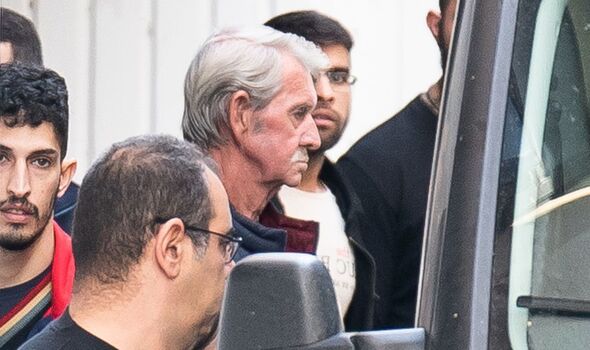 A British pensioner accused of killing his terminally ill wife could face life in a Cyprus jail after a court threw out a plea deal that would have seen him released in time for Christmas. David Hunter, 75, has been in jail on remand for around a year after being arrested for murdering his wife Janice, also 75, at their retirement home in Paphos.

She had been suffering from terminal blood cancer. His lawyers had been led to believe earlier this month a plea deal had been agreed and that he would plead guilty to manslaughter on agreed facts.

But during today’s hearing in Pathos, the court said it is now proceeding with his case as a murder trial, meaning Mr Hunter could face life in a Cypriot jail if he is convicted.

Mr Hunter’s defence team from Justice Abroad said the case against him is likely the first euthanasia case to be tried on Cyprus, which is an Orthodox Christian country.

Euthanasia – the practice of intentionally ending life to eliminate pain and suffering – is strictly forbidden although MPs are considering debating a law to allow it in some extreme cases.

The news has devastated his family with Mr Hunter’s tearful daughter Lesley telling MailOnline: “I’m just shocked and stunned. We are devastated and just don’t know how this has happened.”

Mr Hunter’s UK defence team, led by Michael Polak from Justice Abroad, told the publication: “We are very disappointed by the decision of the prosecution to go back on the agreed facts that they had put forward and which had been agreed between the parties so that the charge could be changed to manslaughter.

“It is clear that the prosecution in this case is attempting to ensure that Mr Hunter receives the highest possible sentence and to prevent mitigating factors, which arise from the evidence in the case, from being put before the court.

“We entered into dialogue with the prosecution in good faith and unfortunately it appears that the case against Mr Hunter is being treated like a game by the Cypriot authorities.

“Getting justice in Cyprus is always difficult as we have experienced in the past in cases of foreign nationals who have appeared here, however we will continue to fight for David, who continues to suffer, to ensure he gets the best possible result in this very sad case.”

The court heard evidence from the Mayor of Tremithousa, a village in Paphos, after the Attorney General in Cyprus decided to go ahead with the murder trial.

He said the couple were popular among the local community, were in a loving relationship and that Mrs Hunter’s pain from her condition increased as time went on.

Mr Hunter’s case has been adjourned until Thursday when a legal ruling will take place. The court will also set dates for the remaining proceedings.

Mrs Hunter died at the retirement home she shared with her husband of 46 years in Paphos, where many of the island’s 60,000 British expats live.

At the time of her death, she was on on heavy medication for a type of terminal blood cancer.

Mr Hunter said after a court appearance in September that his late wife had been diagnosed with cancer five years earlier and after watching her sister die of the disease, she “knew what was coming”.

He had tried to commit suicide on the same day as killing Mrs Hunter, and said outside the court at the time: “She wasn’t just my wife, she was my best friend. It’s like a black hole.

“Janice’s sister had died from leukaemia and she saw what was coming.”