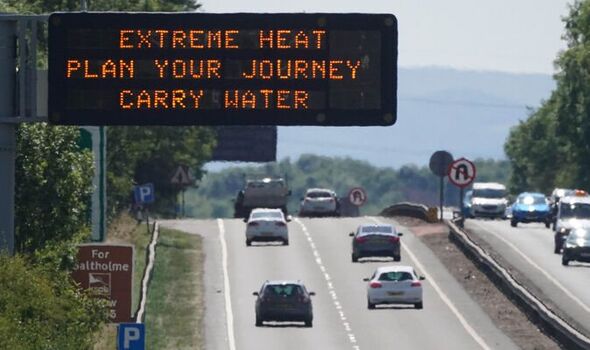 It will be fuelled by the return of the Azores High–a semi-permanent area of sub-tropical high pressure stretching from the Atlantic Azores Islands into Britain. However, warming sea waters around the UK will bolster rising air temperatures as the nation braces for another fire blast, experts say. Jim Dale, meteorologist for British Weather Services, said: “The sea is warmer around the British coast, and this will contribute to whether we see another spell of hot weather.

“It is always going to be increasing air temperatures that drive hot weather, but sea temperatures have a knock-on effect.

“Currently, they are warmer than average, and this is going to have an effect on the weather through the rest of the summer.

“We are looking at another spell of warm weather returning towards the end of next week, and while it would be remarkable to see another 40C, it is not something that is impossible–I would, however, be surprised.”

While a repeat of the mid-July heat plume is unlikely, forecasters warn another spell of hot weather is on the way.

Temperatures will rise towards the end of next week with highs in the mid-30Cs once again possible across southern Britain.

Scotland and the north will be cooler in the 20Cs and here will see more chance of rain. 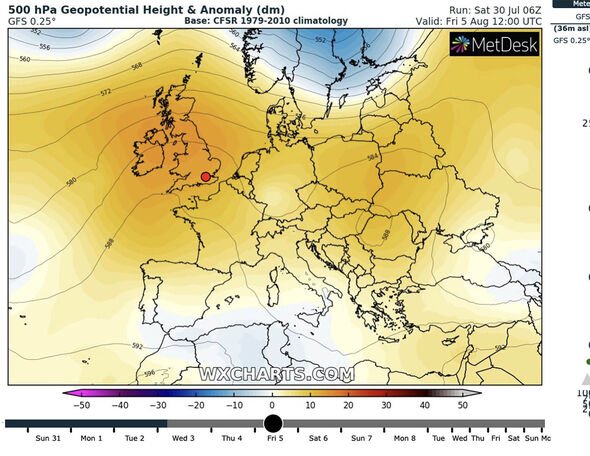 Meteorologist Aidan McGivern said: “Later next week, models tend to agree that the Azores High starts to influence things a bit more, and as the high pressure moves in, we are likely to see more sunshine, more settled weather and temperatures start to rise again.

“In the meantime, Sunday will be a hit day with temperatures of between 27C to 29C in the south, while in the north they will be closer to average.

“It will be similar on Monday with the potential for the high-20Cs with outbreaks of showers in places.”

With rising temperatures, high humidity after the weekend will bring a stifling feel to the start of August.

Northern Britain and Wales are in the firing line for some heavy downpours while the parched south continues to dry out.

Netweather forecaster Ian Simpson said: “During Monday, the relatively warm and humid weather will push into all parts of the country from the south-west. 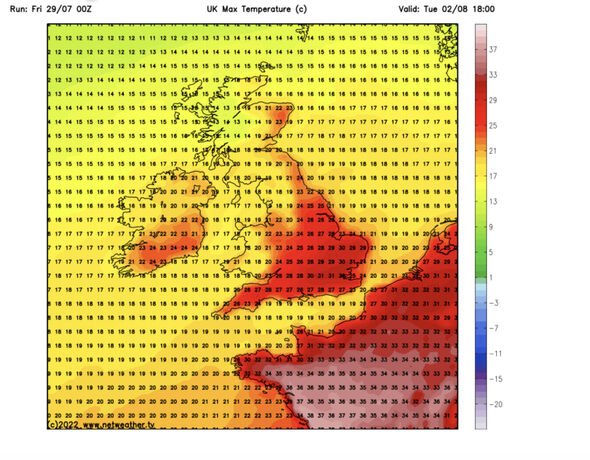 “Outbreaks of rain will spread from the south-west, some of which will be heavy in west Wales, Northern Ireland and western Scotland, but again rainfall amounts in many eastern and southern parts of Britain will be small.

“Wednesday looks set to be rather hot and humid for south-east England and East Anglia with some places hitting 30C, but cooler, brighter, showery weather will spread from the north-west to most other parts of the UK.”

Some forecasters say Britain could be heading towards another momentous heat wave next month.

After a brief late-week cooldown, thermometers will crank up again ahead of next weekend, they warn.

James Madden, forecaster for Exacta Weather, said: “I expect very high temperatures to return again in early August, and this is more likely towards the end of the first week of the month and into the second week. 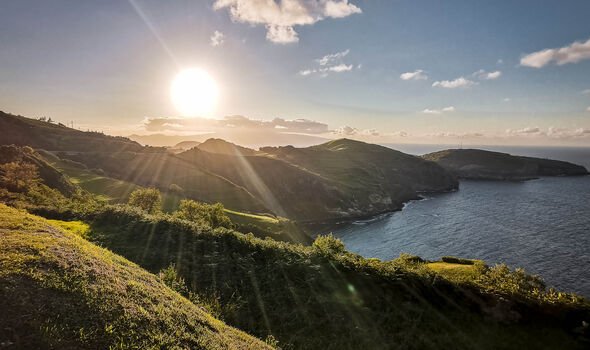 “While there is some rain in the forecast, the heaviest downpours are likely to be in the north, while the south will see less.

“Where there are heavy showers, rain will run off dry ground rather than being absorbed into the soil, so the rain will do little to ease the drought worries.”

Bookmakers are already slashing the odds on records tumbling next month with Coral offering 7-4 on another 40C.

Spokesman John Hill said: “With temperatures set to plummet again over the next few weeks, we have slashed the odds on next month ending as the hottest August on record.

“We are also not ruling out more 40C temperatures in August, with more records in danger of being broken.”