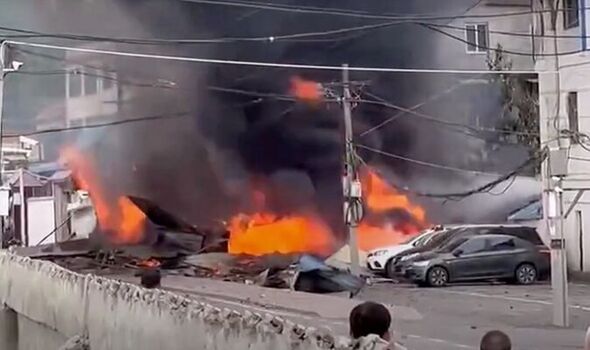 South China Morning Post reports that the pilot parachuted from the aircraft and was taken to hospital along with two members of the public who were injured.

An investigation has been launched into the cause of the crash and casualties.

The crash comes a few weeks after China’s deadliest aviation disaster for 28 years when a Boeing 737-800 crashed into mountains in Guangxi on March 21.

In total, 123 passengers and nine crew were killed after a sudden plunge from cruising altitude.

It led investigators to examine the actions of the crew on the flight deck of the the China Eastern Airlines jet.

Two insiders said the probe took that direction because there was no evidence of a technical malfunction found.

Authorities said in May that the pilots did not respond to repeated calls from air traffic controllers and nearby planes during the rapid descent.

The Wall Street Journal reported in the same month that flight data from one of the black boxes indicated someone in the cockpit intentionally crashed the plane.

It cited people familiar with a preliminary assessment by US officials in the report.

A source told news agency Reuters that investigators were looking at whether the crash was a “voluntary” act involving operations of the controls by crew members, though that did not necessarily mean the dive was intentional.

The cockpit voice recorder was damaged in the crash and it was unclear at the time whether investigators were able to retrieve any information from it.