Move over Mowgli and Baloo, there’s a new jungle book in town – a brand new edition of the stunning coffee table book Jungle Spirits has just been released.

Published by teNeues (www.teneues.com), the 240-page tome has been put together by award-winning photojournalist Christian Ziegler – a former Wildlife Photographer of the Year – and his tropical biologist wife, Daisy Dent.

It’s an ode to the tropical splendour of our planet’s most diverse ecosystems and features almost 200 photographs of the world’s rainforests and jungles, taken on four different continents by 20 different photographers.

TeNeues says: ‘Ziegler’s one-of-a-kind images immerse us in pristine landscapes, let us discover fascinating creatures like bonobos, chameleons, and bats, and delight us with rare plants. Brilliant close-ups show the sculpture-like beauty of flora and fauna.’

Its pages are also filled with explanations of the natural phenomena that take place in tropical ecosystems and anecdotes about the experiences the authors had when compiling the book. Ziegler and Dent explain that they have created the book as both a celebration of tropical forests and a plea for help.

Ziegler says: ‘We are losing our tropical forests and the species that live there. With this book, Daisy and I want to dazzle you with the beauty and ingenuity of tropical nature and to encourage you to care about the future of these forest habitats.’ Scroll down for a taste of the book’s incredible photographs. 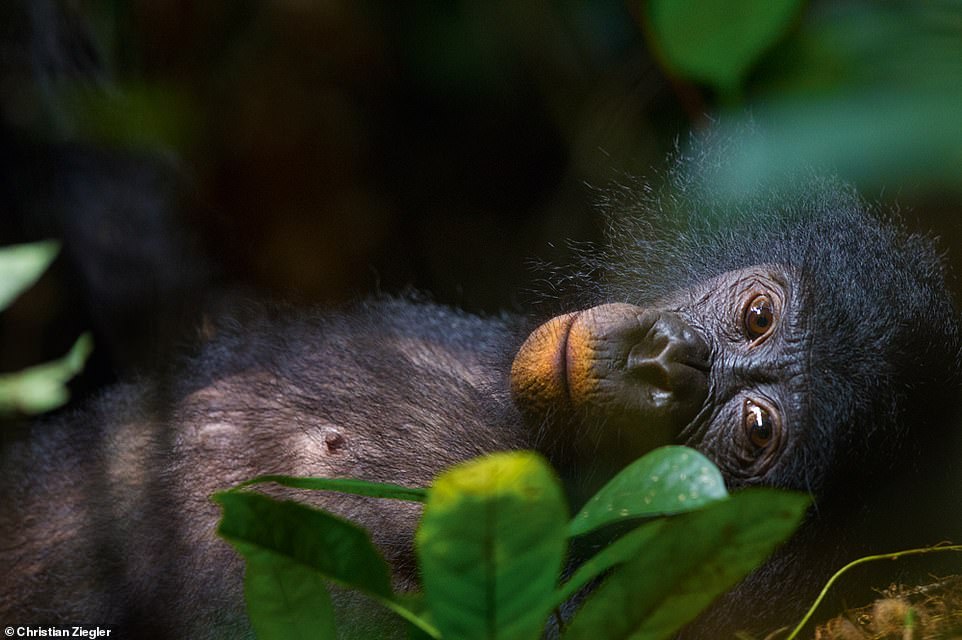 This striking image of a female bonobo was taken in the Democratic Republic of Congo. Her lips are stained with red clay. Ziegler explains: ‘Bonobos often eat clay to help them digest unripe fruit.’ There’s an entire chapter dedicated to bonobos in Jungle Spirits. Ziegler refers to the animals as ‘our unknown cousins’ 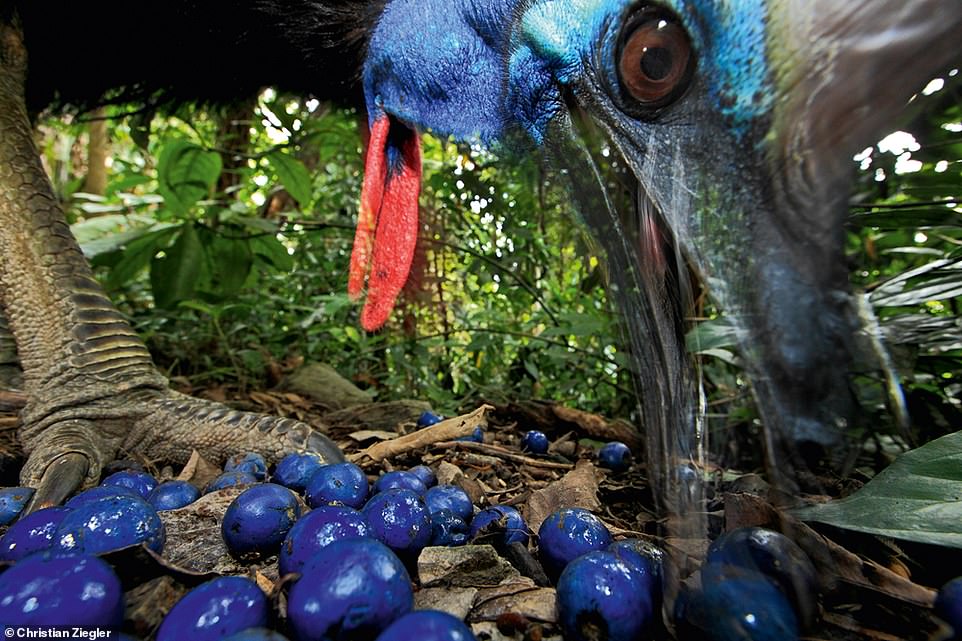 This characterful photograph captures a southern cassowary in action. According to Ziegler, these flightless birds are native to Papua New Guinea and Queensland, Australia, and they play an important role in seed dispersal. The berries on the floor of this snap belong to a blue quandong plant, which is native to Queensland 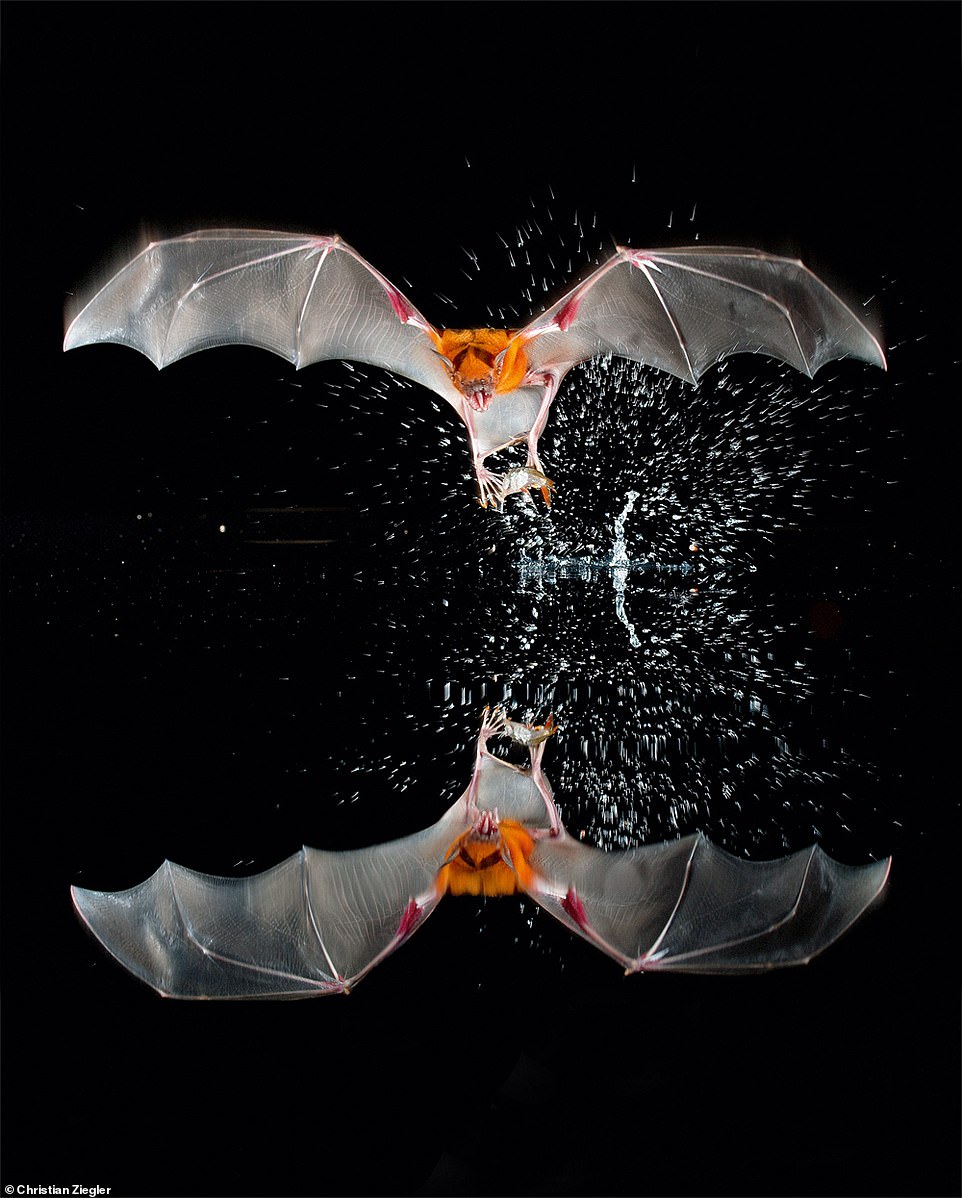 In this powerful photo, a fearsome-looking greater bulldog bat catches a fish in Lake Gatun, Panama. In the book Ziegler writes about how he once climbed into the rotted-out trunk of a tree in order to photograph the sleeping bats inside. He says: ‘The smell is overwhelming and stings my eyes and nose – I am standing on a soft mound of bat droppings alive with cockroaches’ 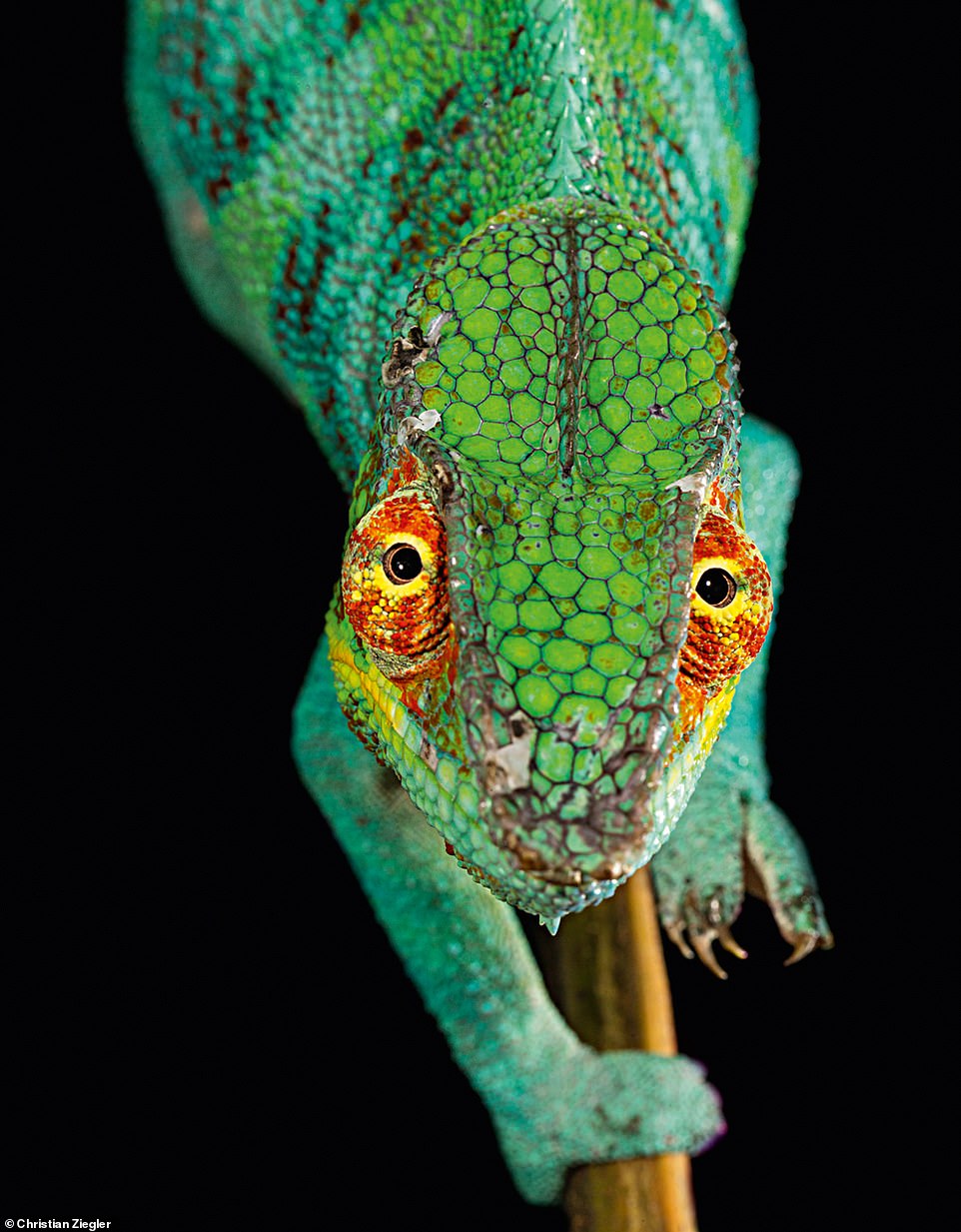 According to Ziegler, the blue morphotype of panther chameleon that’s pictured in this stunning image is very rare in the wild due to exploitation by the exotic pet trade. The book explains how this particular species is endemic to the area around Ambanja, a city in northern Madagascar 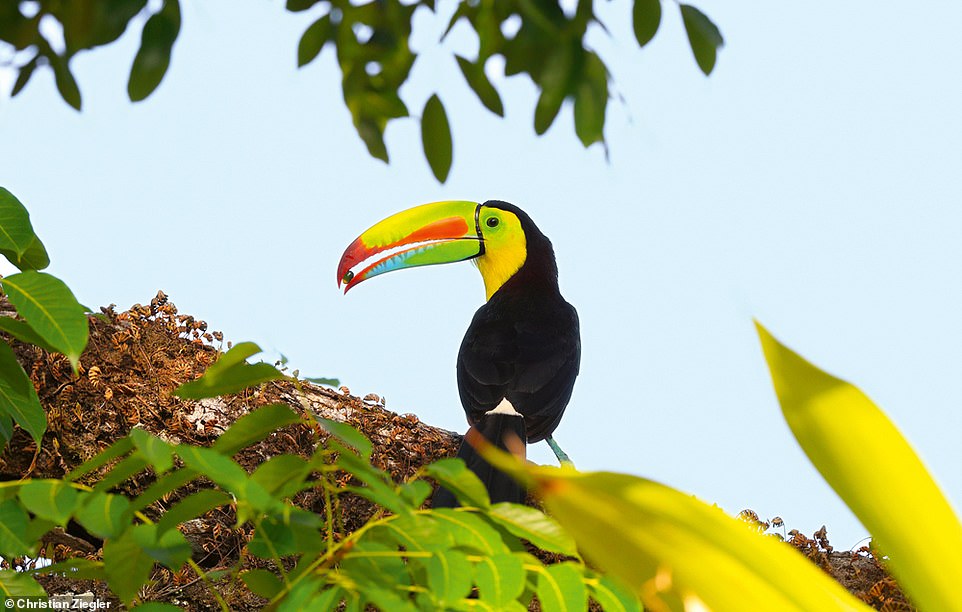 This colourful photo shows a keel-billed toucan feeding on palm fruits in Panama. Ziegler reveals: ‘Toucans are one of the few birds that can disperse plants with large seeds and play a key role in dispersal in forests in Central and South America. They are especially important in young forests growing on abandoned land, as they bring in seeds of many different species that will help the forest regenerate a diverse tree community’ 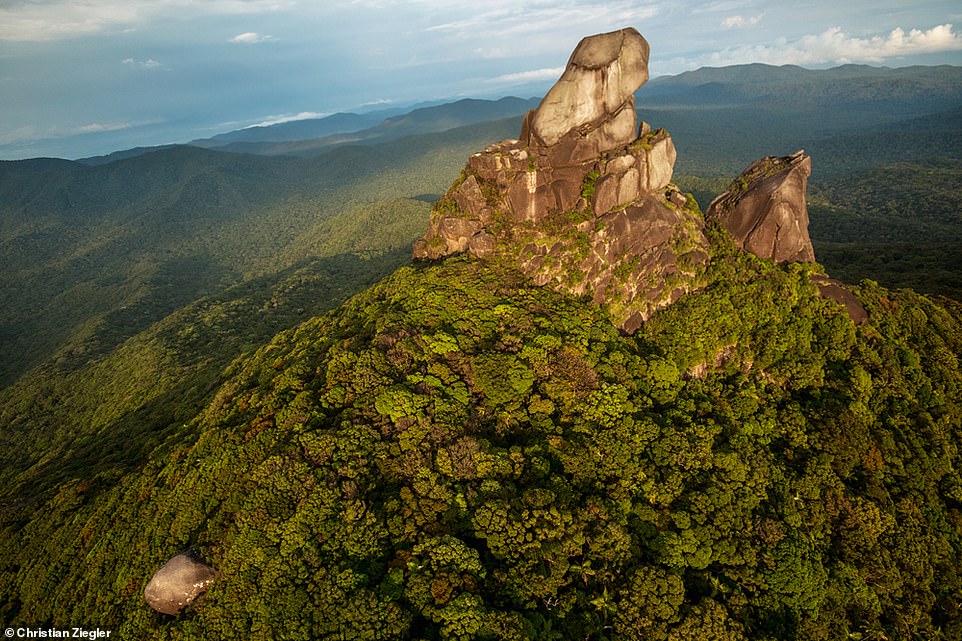 Pictured is The Daintree rainforest in Queensland, Australia. According to Ziegler it’s the world’s oldest tropical forest. This snap is used to introduce a chapter in the book that’s titled ‘Green’. In it, the authors write about how tropical forests epitomise the power of photosynthesis 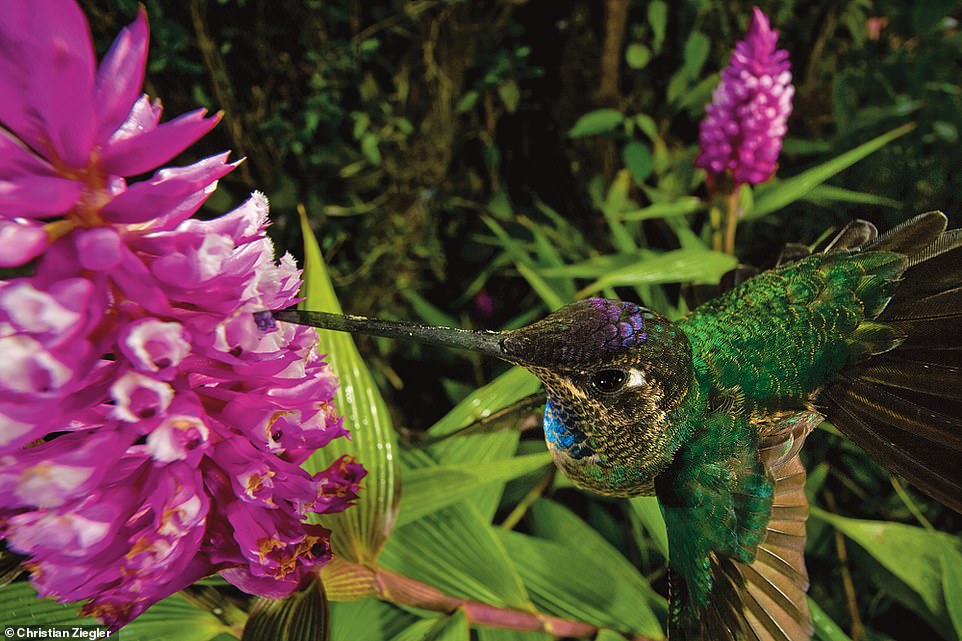 This action shot shows a hummingbird pollinating the flower of an orchid in the cloud forest of western Panama. Ziegler explains: ‘You can see the purple pollen packet attached to the tip of its beak.’ This image features in a chapter on orchids and their pollinators 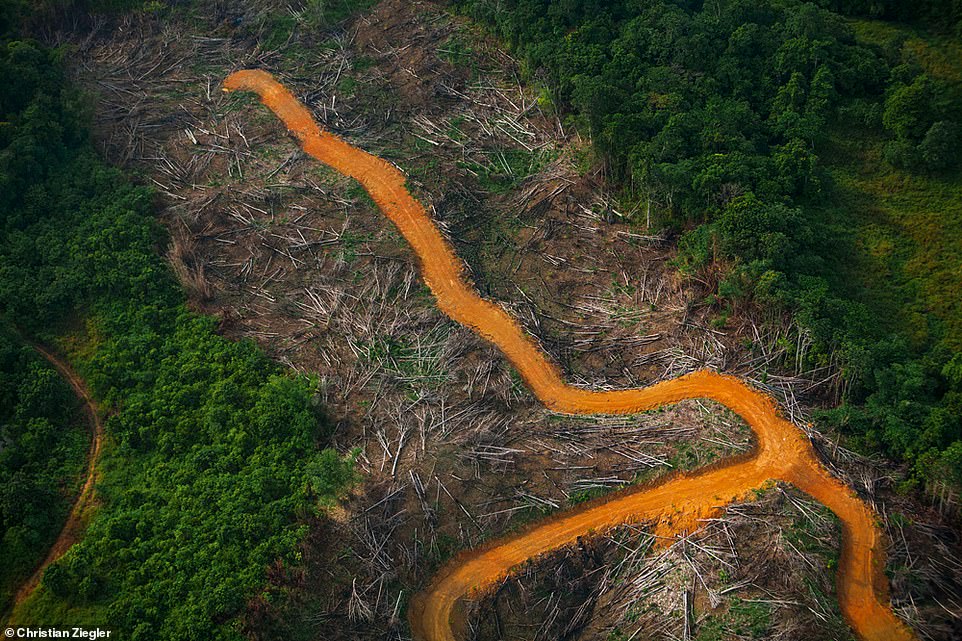 This saddening image depicts how logging roads and clearfelling have torn into the primary forest of Sabah, Malaysia. The photo features in a chapter titled ‘People and the Forest’, which considers the impact humans have had on tropical forests and the moral obligation they have to conserve the world’s most diverse ecosystems 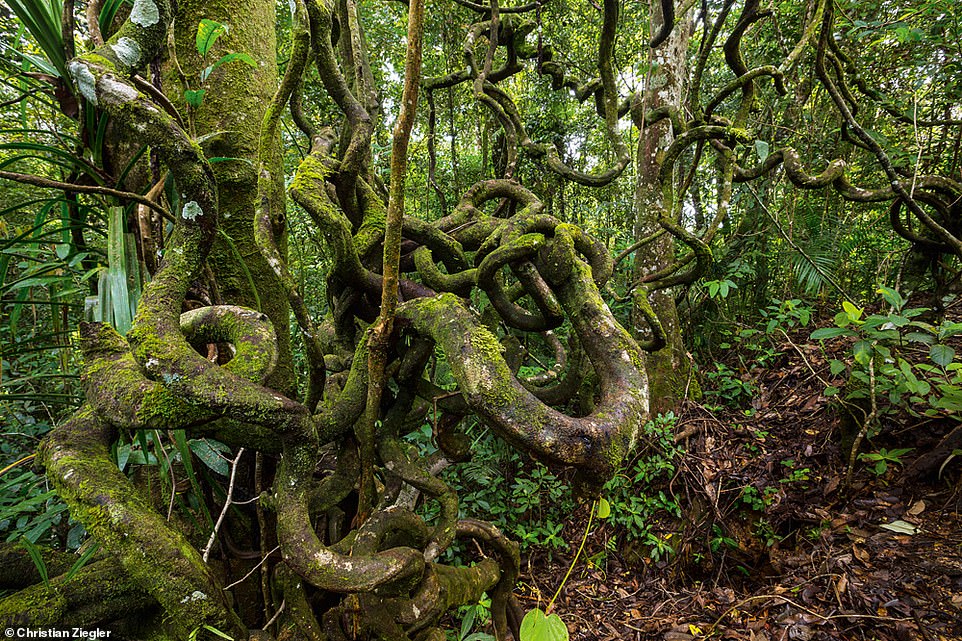 A complicated tangle of lianas (a woody vine) grows on the slopes of Mount Kinabalu in the state of Sabah, Malaysia, in this image. The book explains: ‘Lianas exploit the trees. These vines climb up tree trunks and over branches, using the structure of the trees to put their own leaves above the canopy’ 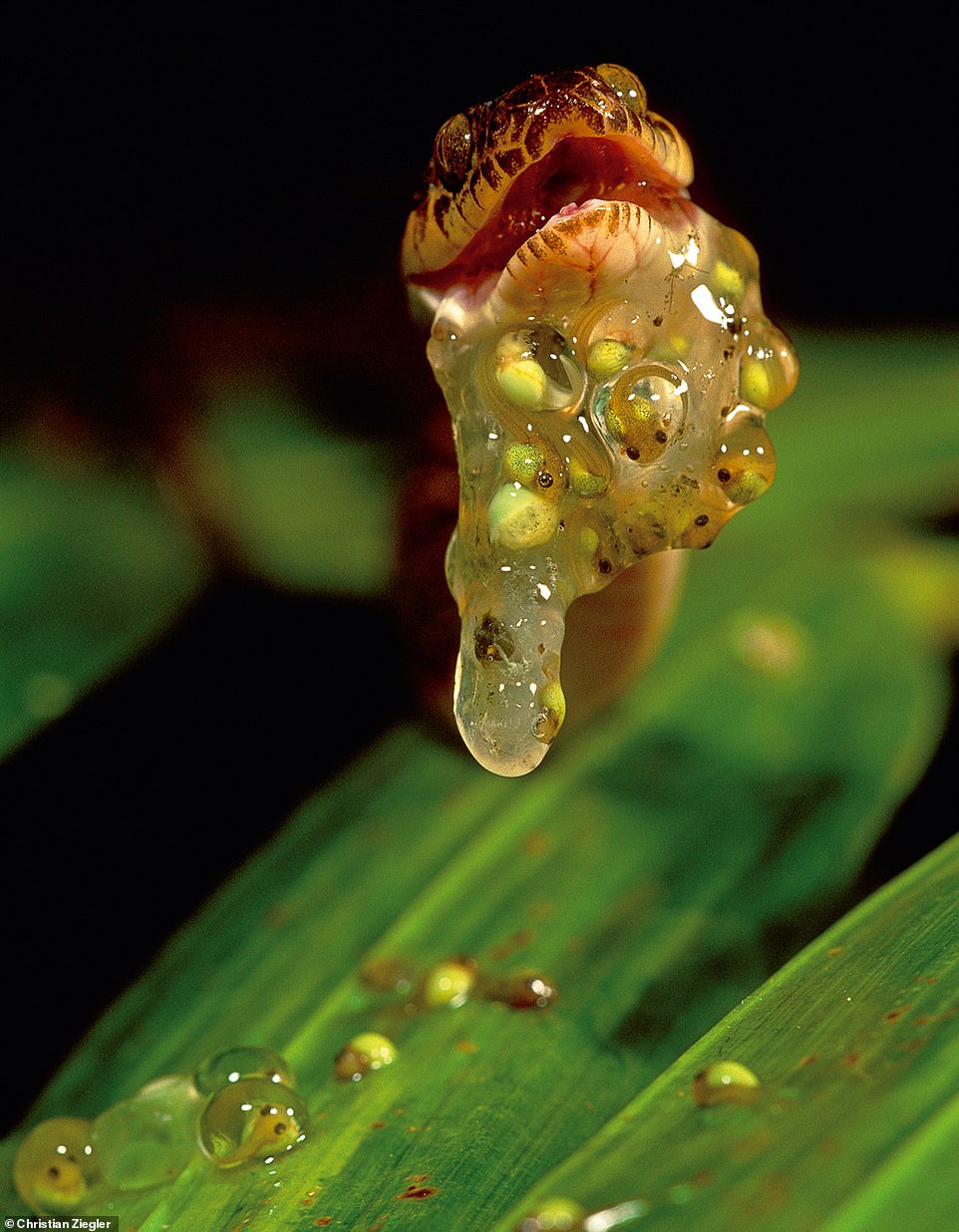 Ziegler calls the cat-eyed snake in this gruesome shot ‘a fierce predator’. In this image it’s eating a clutch of red-eyed treefrog eggs. The shot was taken in Panama, where Ziegler and Dent now live 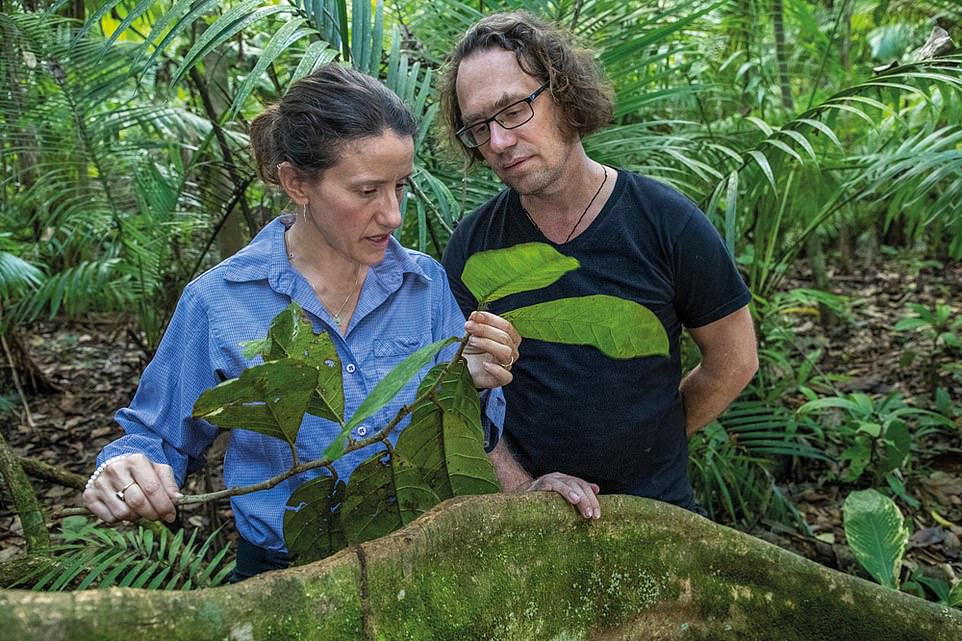 The foreword to Jungle Spirits, written by Ruth Eichhorn, former director of photography at Geo magazines, reads: ‘Without people like Christian Ziegler and Daisy Dent [pictured], we’d be blind to this part of the world that belongs to us and is of the utmost importance to human survival on our planet’ 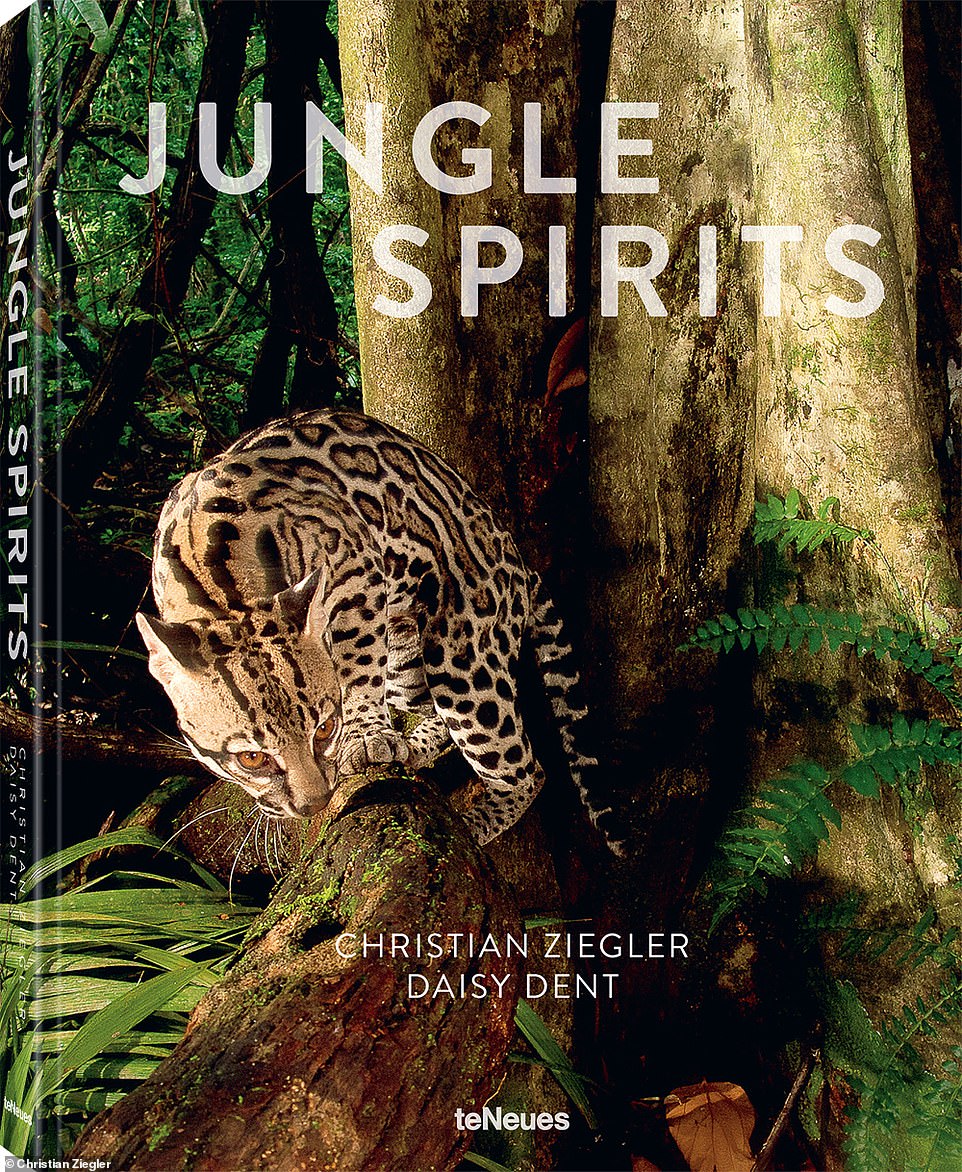 Jungle Spirits by Christian Ziegler and Daisy Dent is published by teNeues (€39.90/$55/£35, www.teneues.com)