At the onset of the coronavirus pandemic, with travel restrictions in place worldwide, we launched a new series — The World Through a Lens — in which photojournalists help transport you, virtually, to some of our planet’s most beautiful and intriguing places. This week, Emile Ducke shares a collection of images from Siberia.

Every night around 4 a.m., in a remote corner of Western Siberia, Olga Voroshilova and her partner, Yevgeny Sadokhin, would crouch around a crackling Soviet-era radio and repeat a seemingly random series of numbers from one outpost to the next. 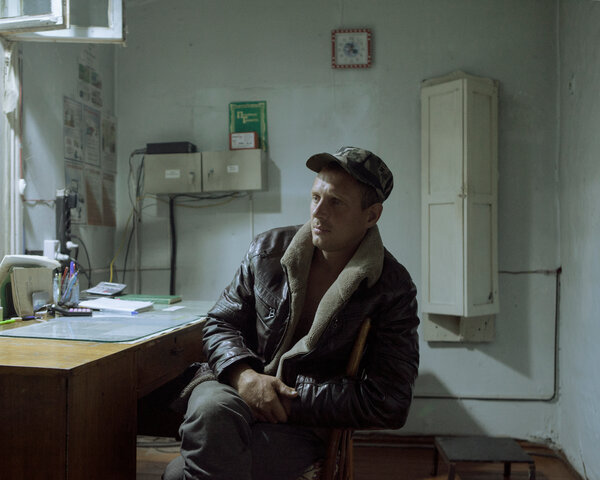 It was the nightly relay of the weather data, gathered from the wind vanes and barometers surrounding their home, a secluded meteorological station on the isolated banks of the Ket River.

The couple, together with their daughter, Ksenia, and another family, had moved to the weather station just a few weeks before. They had exchanged their jobs and apartments in the regional capital, Tomsk, for the liberty of a life in the wild, away from the rest of the world.

The station had no phone signal and no internet line. Some of their food would come in packages, sent intermittently, from the local weather service headquarters. Supplies would include a few bars of chocolate, which the families generously shared with me when I stayed there for a few days in July of 2016.

I was traveling the Ket River that summer, exploring the remote and isolated communities living along its banks.

Though serpentine and relatively small, the Ket River was once part of a significant thoroughfare in Siberia. After the construction of a canal in the late 19th century, it served as a corridor that linked two of Russia’s biggest river basins, the Ob and Yenisey.

Extreme weather here wreaks havoc on overland roads, which fluctuate between muddy and rubbly in the summer and inaccessibly icy in the winter. Driving distances are measured in days and weeks. The Ket River, by comparison, offered a reliable mode of transportation — at least until the Trans-Siberian Railway was built.

By the early 1900s, west-to-east traffic in the region — including farmers, traders and Tsarist troops — had begun to rely on the railway. Fewer and fewer travelers needed the Ket.

For the weather station’s residents, Ket’s remoteness offered the promise of personal freedom. Historically, though, the region’s isolated location served as the grounds for a prison, one that relied on endless miles of emptiness instead of walls or barbed wire.

Many political dissidents and revolutionaries were sent into forced exile to the village of Narym, close to where the Ket River meets the Ob. Among them was Joseph Stalin himself.

When Stalin became the Soviet leader, he continued the practice, deporting hundreds of thousands of people to the vast and desolate areas north of Tomsk, including Narym.

Today their descendants make up a large portion of the village’s population.

At Aidara, another community on the riverbank, members of the Old Believers, a religious group that split from the Russian Orthodox Church in the 17th century in protest against reforms, make up the majority of the village’s roughly 150 residents.

Persecuted in Tsarist Russia and marginalized during the Soviet era for their religious beliefs, Old Believers scattered across the country, settling in its most isolated corners.

The distance, for them, meant protection.

I returned to the Ket River in January of 2018, when temperatures held between minus 20 and minus 50 degrees Fahrenheit, turning the river into a snaking, sturdy avenue of ice. Villagers in Narym drilled holes into the frozen surface of the Ob River, near the mouth of the Ket, threw in their nets and waited for fish.

Upriver in the settlement of Katayga, where there is no bridge, loggers had been waiting for the river to turn into a solid, icy road. The piles of lumber they had racked up could finally be stacked on trucks and sent across the river for distribution.

My first visit to one of Katayga’s lumber mills, though, was a lonely one: That day, the usual bustle of workers had been replaced by a pile of handwritten sick notes on the director’s desk. “Hangovers,” the director explained.

Religious observance here is also affected by the isolation.

With no priest residing in the settlement itself, Katayga’s Russian Orthodox Church was supposed to be visited regularly by a priest from the neighboring village. But the neighboring village is a six hours’ journey (by road and ferry), and so the clergyman rarely came by. In his absence, Marina Prosukina, a Katayga resident, took over some of his duties, leading Sunday services, reading the prayers and anointing believers with oil in the sign of the cross.

Normally, in the Russian Orthodox Church, women assume less ecclesiastical roles; they sweep floorboards, sell candles and lead classes for children. The role and duties of a priest are reserved exclusively for men.

But such strict rules and regulations could not withstand the remoteness of Ket — and so, along the river, a different kind of freedom was formed.

Emile Ducke is a German documentary photographer based in Moscow.