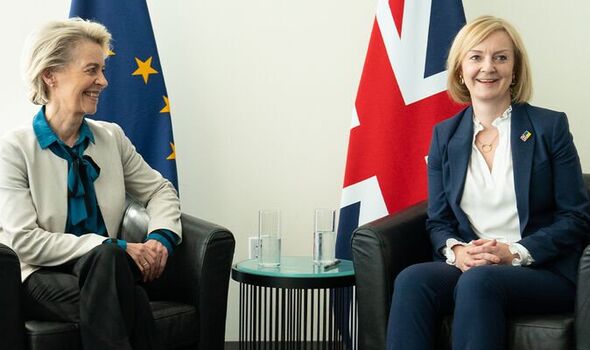 The two leaders met on the sidelines of the United Nations General Assembly.

It is the first time Ms Truss and Ms von der Leyen have met since the UK politician took over from Boris Johnson as Prime Minister.

Frictions over the Northern Ireland Protocol, which have dominated the relationship between the UK and EU post-Brexit, were planned to be high on the agenda.

However, a read-out on the meeting made only a fleeting reference to the row as both leaders work together on tackling Russian aggression.

“They strongly condemned Russia’s actions in Ukraine and agreed that Putin’s recent calls to mobilise parts of the population were a sign that Russia’s invasion is failing. It is a statement of weakness.

The show of unity came after an awkward exchange at the start of the meeting.

“It’s very nice to see you,” the Prime Minister said,

The European Commission president only gave a slight nod and smiled in response.

The pair sat smiling for the cameras before the media was asked to leave the room for discussions to take place behind closed doors.

Speaking after the meeting, Ms von der Leyen said she had a “good discussion” with Ms Truss on relations between the UK and the EU.