A proposal announced by President Trump last month was to send older Americans $200 discount cards to offset prescription costs. It’s not going to happen before the election, and maybe not ever. 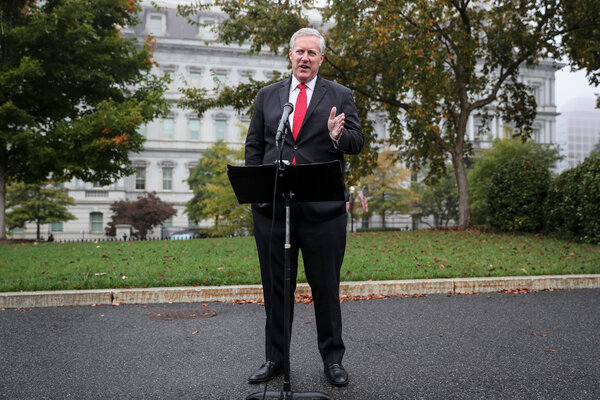 By Margot Sanger-Katz and Noah Weiland

WASHINGTON — A month ago, President Trump surprised much of his own government when he announced in North Carolina that he would soon send $200 discount cards to more than 30 million older Americans to offset the cost of prescription drugs.

The promise set off a scramble among health and budget officials unaware that such a policy was being considered. At first, they rushed to figure out whether such a legally and logistically complicated plan could be delivered in October, as Mark Meadows, the White House chief of staff, had vowed in an interview the day of the speech. When many questioned its prudence before an election, they then tried to hand off the president’s $8 billion hot potato.

Now, less than two weeks before the election, officials acknowledge that Medicare recipients will not be getting their $200 cards this month.

“This whole thing looks like a real stretch to me, and is probably going to collapse soon as questions about it escalate,” said James C. Capretta, a resident fellow at the American Enterprise Institute, and a top budget official during the George W. Bush administration.

The drug card promise was presented as a centerpiece of Mr. Trump’s health care agenda, what he called “another historic provision to benefit our great seniors.” Such boasts are becoming routine. Since the 2016 campaign, the president has repeatedly promised that a comprehensive overhaul of the health care system was imminent, that some measure was coming to protect people with pre-existing medical conditions, regardless of his push to repeal the Affordable Care Act and its protections, and that prescription drug prices were coming down substantially.

When Lesley Stahl of the CBS News program “60 Minutes” sat down with the president this week, the White House presented her with a thick book supposedly full of health care successes. But Mr. Trump’s policies have largely failed to materialize.

In this case, the proposal that came out of Mr. Trump’s mouth so alarmed administration officials that they have spent the intervening weeks handing the policy back and forth, hoping to avoid affirming anything before the election that could subject them to congressional and legal scrutiny.

The plan was hastily devised in the weeks after the collapse of an agreement between the White House and pharmaceutical industry to lower Medicare drug costs. In negotiations, Mark Meadows, the White House chief of staff, had insisted that drug makers pay for $100 discount cards that would be mailed to seniors before November, which some in the industry referred to as “Trump cards.”

Days later, Mr. Meadows approached White House officials who work on health policy, steering his new idea of a government-funded discount card to the Centers for Medicare and Medicaid Services, which is run by Seema Verma, a close White House ally. Administration lawyers and officials in the White House budget office began to assess the plan, and are still doing so.

Many of the officials assigned to enact the policy view it as legally dubious. Generally, major changes in Medicare policy require Congress to pass legislation. And numerous officials balked at the election-eve timing of the plan, fearing liability if they delivered what the White House wanted. Mr. Meadows acknowledged that pushback on Wednesday.