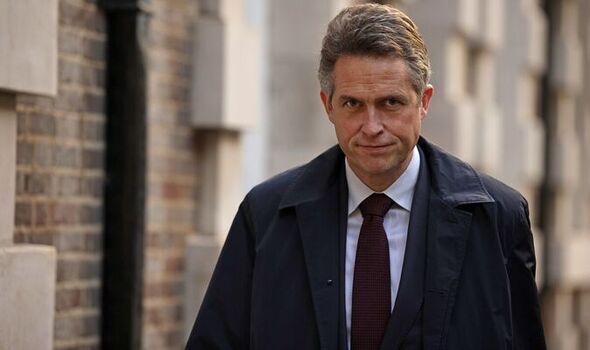 The Prime Minister insisted he has a zero-tolerance approach to bullying within government – but he has resisted pressure to kick out his Minister Without Portfolio. Sir Gavin is facing a probe after details of the messages were revealed over the weekend.

It comes as fresh bullying allegations against him from 2016 have also emerged.

And a further claim last night came from a senior civil servant, who said Sir Gavin told them to “slit your throat” in what they called a campaign of bullying when he was defence secretary from 2017 to 2019.

He is said to have told them to “jump out of the window” in another instance.

They spoke unofficially to the MoD’s head of HR but did not formally complain. Yet Sir Gavin said: “I strongly reject this allegation.” On the text claims, Mr Sunak said: “There’s an independent complaint process that’s being conducted. It will be right to let that process conclude before making any decisions.”

But speaking at COP27 in Egypt, Mr Sunak added that Sir Gavin’s language was “not right and not acceptable” and that he welcomed the fact he had expressed “regret”.

Sir Gavin accused ex-Tory chief whip Wendy Morton of trying to punish MPs out of favour with the then PM Liz Truss by excluding them from the Queen’s funeral service in September.

One text said: “Well, let’s see how many more times you **** us all over. There is a price for everything.”

The 2016 allegations are that while Sir Gavin was chief whip he raised details about a current minister’s private life during a talk to try to silence her while she was on the backbenches.

She is said to have contacted the party after it came out that Sir Gavin had sent abusive texts to Ms Morton.

But Labour leader Sir Keir Starmer said the Cabinet Office minister was “clearly not suitable” for the job and called Mr Sunak “weak” to have appointed him.