During the UK Government’s coronavirus press briefing, the BBC’s Political Editor stated that the Chancellor has underestimated the financial help people need during the pandemic. Mr Sunak argued that his previous job support scheme was created with the aim of the economy reopening and restrictions being lifted.

Ms Kuenssberg said: The problems with the first version of your job scheme that you have rewritten today were obvious to many people at the start.

“Why do you keep underestimating the help people really need?”

Mr Sunak replied: “I think it is a perfectly fair question to ask about the timing of this.

“If you think back to the summer when we designed the job support scheme in conjunction with businesses and unions, at that point, we were looking forward to the economy reopening and restrictions being lifted.

READ MORE: EU Commissioner squirms over refusal to give up fisheries for UK deal ‘What about jobs?’ 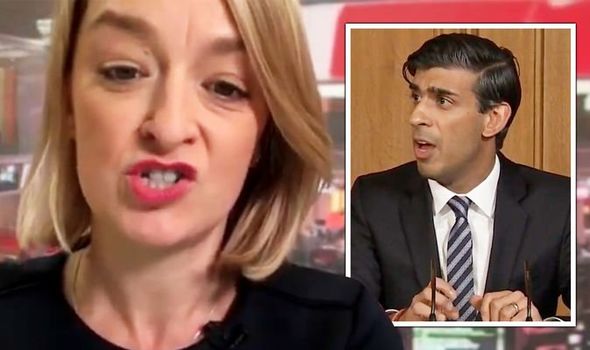 “What we have seen especially in the last four or five weeks is as these new restrictions have been put in place the impact they are having on the ground has been highly significant particularly to businesses in the hospitality sector, particularly in these Tier two areas.

“The accumulative weight of these restrictions can be seen in their numbers over the last few weeks.

“As we have always said we will adopt our response as the situation changes.

“Now that the health restrictions have changed and that has had an impact on the economy, I think it is right that we respond pragmatically and flexibly to that.

“Ultimately what we are trying to do is protect people’s jobs and income and the measures we have put in place today I am confident will do that.”

He told the House of Commons: “To protect jobs we are making the job support scheme more generous for employers.

“If businesses are legally required to close, as we have already outlined, the Government will cover the full cost of employers paying two-thirds of people’s salary where they can’t work for a week or more.

“For businesses who can open, it is now clear the impact of restrictions on them, particularly in the hospitality sector, is more significant than they’d hoped. So I’m making two changes on the work scheme to make it easier for those businesses to keep staff on rather than make them redundant.

“First, under the original scheme, employees had to work for 33 percent of their normal hours. Now we will ask them to work only 23 percent of those hours.

“Second, the employers’ contribution for those hours not worked will not be 33 percent or even 20 percent as it is in the October furlough scheme. It will reduce to five percent.

“And the scheme will apply to eligible businesses in all alert levels so businesses that are not closed but face higher restrictions will be able to access greater support.”