Anneliese Dodds accused Rishi Sunak of “threatening” businesses with having to make an increased contribution to furlough at the “worst possible time”. The Shadow Chancellor said Rishi Sunak’s public sector pay freeze will deliver a “sledgehammer” blow to consumer confidence, while the Government had mismanaged the finances on an “industrial scale”. But Mr Sunak insisted the plans “protect Britain”.

She told the Commons: “To rebuild business, the Chancellor also needs to listen to business.

“We’re less than a week from the end of the lockdown, yet we’ve heard nothing about whether extra support will be provided through the additional restrictions support grant for areas subject, once again, to tough restrictions.

“And the Chancellor is still threatening employers with an increased contribution to furlough in January, at the worst possible time for increasing and building confidence.”

Mr Sunak replied: “The British people would judge this spending review as a reflection of their priorities. 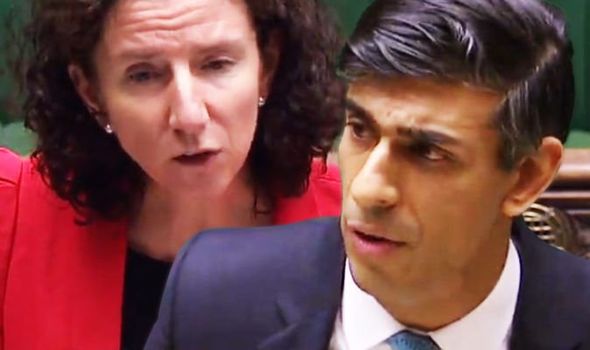 The economic emergency caused by coronavirus has only just begun and there will be “lasting damage” to the UK, Mr Sunak said as he set out his Spending Review.

Official forecasts showed the UK economy was expected to shrink by 11.3 percent this year, the worst recession for more than 300 years.

The Chancellor told MPs that the Office for Budget Responsibility did not expect the economy to return to its pre-crisis levels until the end of 2022 and the damage was likely to last.

The “long-term scarring” would mean that in 2025 the economy will be around 3 percent smaller than expected in March.

Mr Sunak said: “Our health emergency is not yet over. And our economic emergency has only just begun.

“So our immediate priority is to protect people’s lives and livelihoods.”

The Government will borrow an eye-watering £394 billion this year, equivalent to 19 percent of GDP – the highest ever recorded in peacetime.

Although borrowing will subsequently fall, the national debt is forecast to reach 97.5 percent of GDP in 2025-26.

“This situation is clearly unsustainable over the medium term,” Mr Sunak admitted.

While Mr Sunak continued to allocate large sums to tackling the ongoing emergency he confirmed there would be restraint in pay awards for public sector workers and a cut in overseas aid.