The under-pressure Chancellor vowed the Government will get through this tumultuous period and set his sights on rapidly boosting economic growth next year. Mr Kwarteng spoke with Conservative MPs amid growing financial turmoil following last week’s bumper tax-cutting emergency budget.

Since his announcement the pound has plunged against the dollar and there have been widespread jitters in the financial markets.

The IMF also took the unusual step of criticising the government’s plans on Tuesday.

The fallout has led to some Tories calling for Liz Truss to sack the Chancellor just weeks into the job. In a call with MPs, Mr Kwarteng admitted the markets have been volatile but reportedly said they’re “settling down” now.

And he doubled down on his decision to abolish the 45p top rate of income tax saying “it was a tough choice but the right choice”.

Looking to the future he said he wants to see an uptick of growth in mid-2023 then a good year of growth in 2024. 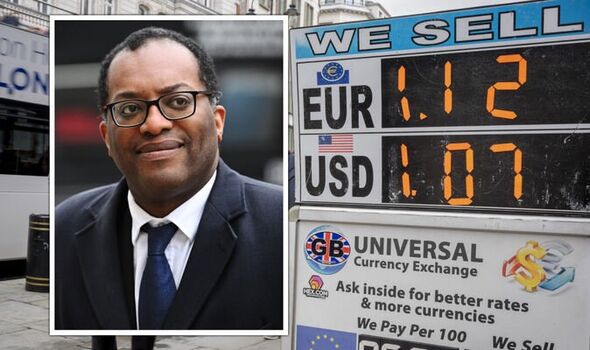 Some Tory grandees have defended Mr Kwarteng against criticism from the IMF. Tory veteran Sir John Redwood said yesterday: “The IMF was very wrong, as was the Bank of England, over the inflation which they now rightly worry about.”

He said: “My message today is that the Government is right to see that the main threat for the year ahead is recession not inflation. Because the good news is that all forecasters say inflation will come down a lot next year, and the sooner the better.”

Lord Frost, former Brexit secretary, said the IMF was wedded to policies that led to slow growth and weak productivity.

He said: “The only way forward for Britain is lower taxes, spending restraint and significant economic reform.

“Liz Truss and Kwasi Kwarteng are rightly focused on delivering this and they should tune out the criticism from those who are still in the intellectual world of Gordon Brown.”

Lord Hannan, writing for the website ConservativeHome, said the sterling sell-off was not caused by unfunded tax cuts but by a “belief that this Budget has made a Labour victory more likely”.

In response to the IMF criticism a Treasury spokeswoman said: “We have acted at speed to protect households and businesses through this winter and the next, following the unprecedented energy price rise caused by Vladimir Putin’s illegal actions in Ukraine.”

Mr Kwarteng is due to set out further details on the Government’s fiscal rules on November 23. Despite Mr Kwarteng’s pleas for calm, many Conservative MPs are uneasy about the course being chartered by the government.

North Thanet MP Sir Roger Gale commented: “I don’t think that we can wait until November, which is the current intention.

“We need a statement in very short order indeed to steady the nerves, steady the market and set out very clearly what the business plan is so everybody understands properly where we are going.

“The failing in the statement that was made last Friday is lack of clarity. I think that, in part, is what has led to the run on the pound and the position that we find ourselves in today.”

Rishi Sunak, former Chancellor and Tory leadership contender who predicted market chaos under Liz Truss’s plans, is not expected to attend the Tory Party conference in Birmingham next week.

But his former supporters are starting to criticise the new administration. Mel Stride, Tory chair of the Commons Treasury committee, said he could not understand why Kwarteng promised “more to come” on tax cuts. And another warned that Mr Sunak’s predictions are coming true “in alarming fashion”.

The backbencher said it was “depressing” to see the turmoil caused by the new government’s dramatic tax cuts.

The MP added: “For Rishi supporters, we love our party dearly and wanted to get behind Liz, as unlike Boris she actually appears to be a Conservative.

“However, you can’t govern on the back of a couple of think tank pamphlets. Governing is a serious, grown-up business – it is somewhat depressing to see all the predictions Rishi’s campaign made come true in alarming fashion. Liz’s prospectus was either going to work brilliantly, or be an unmitigated disaster that would lose us the election.”

Another Tory MP said the Chancellor cannot survive the turmoil unleashed by his new economic plan. One former cabinet minister was quoted as saying: “I think he’s dead but in the Tory party death can take many forms. It can take a long time.”

Another member of the government, said: “Liz has a pretty quick choice to make: either she bullets her chancellor and changes course or she could lose her premiership in a month.”