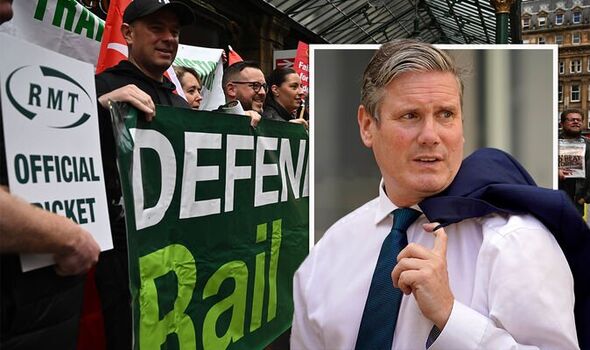 You can add your voice to the tens of thousands of comments posted daily on Express.co.uk and have your say on the big issues facing the country today.

The RMT union is leading the biggest rail strike in modern history this week, which will see half of Britain’s rail lines close on June 21, 23, and 25 after last-ditch talks over pay and job cuts fell through.

The union is fighting for a seven percent pay rise in line with December’s inflation rate when talks initially began.

RMT general secretary Mick Lynch told LBC’s Tom Swarbrick on Sunday: “Most of our members haven’t had a pay rise in two or three years – that includes Network Rail and the train operating companies. Our people are getting poorer while their jobs are under threat. And if you survive the jobs cull that they’ve got in mind your working conditions will be diluted and you’ll be worse off.”

Labour, which has largely been on the side of the union, has been urged to now denounce the stikes as action hits ‘millions of families in the pocket’.

Despite being ordered not to, a number of Labour MPs have joined the picket lines in support of the strikes.

Labour whip Navendu Mishra also joined a picket line, saying: “As a proud trade unionist, I stand with all workers on our railway network who are taking industrial action to fight for their jobs and keep passengers safe.”

In relation to Labour’s response to the strikes, Transport Secretary Grant Shapps said in a letter to Sir Keir Starmer: “The public will not forgive the Labour Party for siding with those who are attempting to bring our country to a standstill.

“It’s time for Labour to stop backing these strikes, and urge your union paymasters to talk, not walk.”

Do you think Labour should denounce the rail strikes?

HAVE YOUR SAY RIGHT NOW – JOIN THE EXPRESS READER DEBATE IN OUR COMMENTS SECTION.