NEW YORK (Reuters) – When Republicans in Wisconsin pushed through state elections last week in the middle of the coronavirus pandemic, Jessica Jaglowski donned a protective mask and headed for the ballot box, determining her best shot at self-preservation was not to stay home but to vote Republicans out of office. 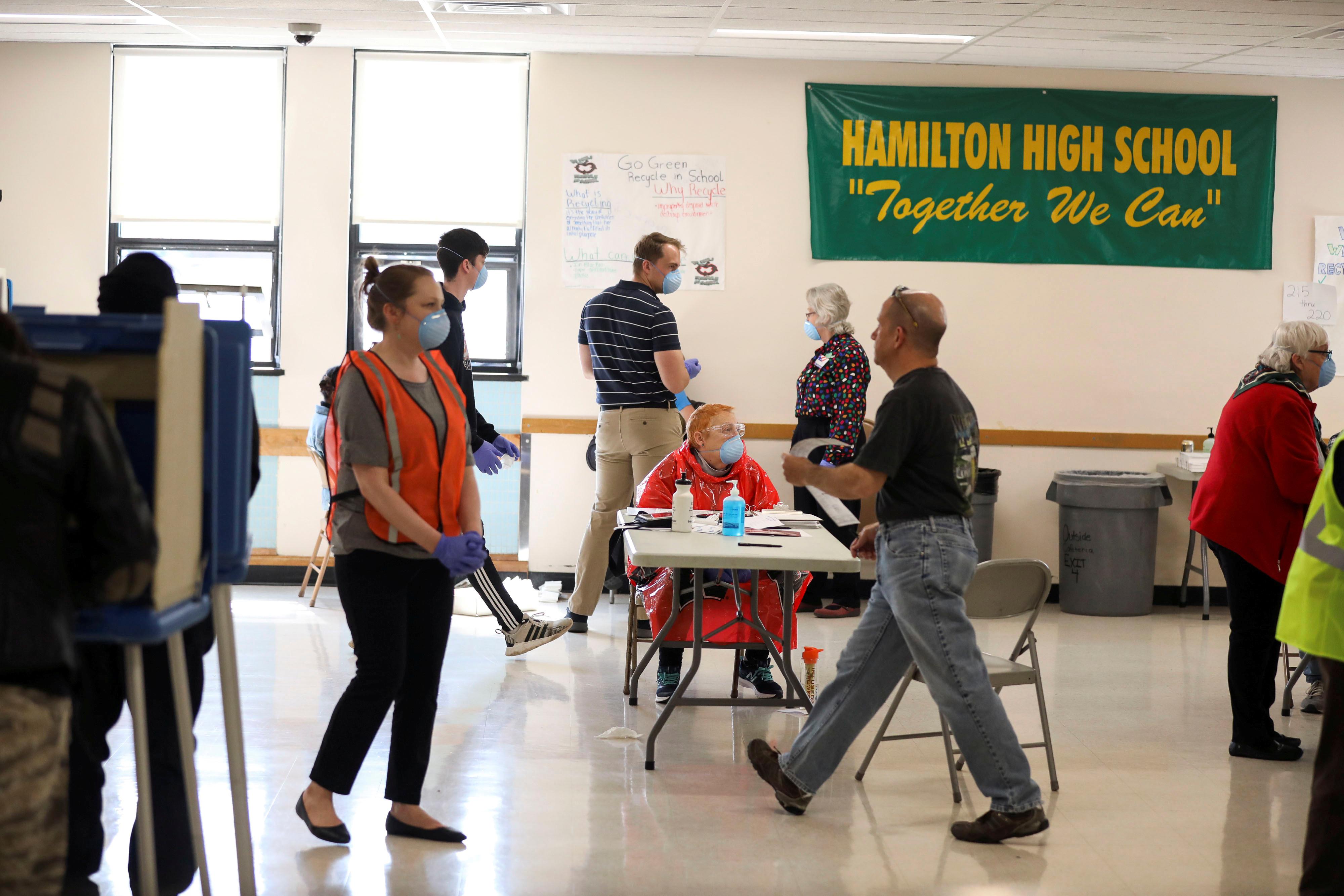 Come November, when Republican President Donald Trump is up for re-election, Jaglowski, a 47-year-old Democrat in Milwaukee, says she will be even more determined to vote, even if the deadly virus continues to ravage her community.

“He’s half the reason we’re in this mess right now,” she said, criticizing Trump for downplaying the threat of COVID-19 before it hit the country hard. “If I have to wait in line for 12 hours, in a storm, I don’t care. I’m voting for whoever can get Trump out.”

After three years in the White House, this much about Trump is clear: Those who want to deny him the presidency are much more determined to vote now than they were four years ago.

Democrats’ intention to vote is also rising more than it is among Republicans, both nationally and in historically competitive battleground states like Wisconsin that Trump narrowly won in 2016, according to more than 66,000 U.S. adults who took the Reuters/Ipsos online poll in the first quarter of 2020 or 2016.

The highly motivated opposition is another sign of trouble for Trump, who saw his chief argument for re-election – a soaring economy and record-low unemployment – evaporate amid a health crisis that has put millions of Americans out of work.

Even before the pandemic, Trump struggled to woo independents and moderates he would need to win November’s election, and recent polls showed Trump trailing presumptive Democratic nominee Joe Biden by several points nationwide, as well as in battleground states such as Arizona and Michigan.

According to the Reuters/Ipsos poll, 70% of Democrats said they were “certain” to vote in the upcoming presidential election, 9 percentage points higher than in the first quarter of 2016.

Among Republicans, the increase from 2016 was much smaller – 3 percentage points – with 71% saying they will vote in November.

Democrats have for years outnumbered Republicans in the United States but they also tend to be less politically active. Yet for the first time since at least 2012, nearly the same percentage of Democrats and Republicans said they planned to vote in 2020.

When the poll combined states that are expected to be especially competitive this year – Arizona, Florida, Michigan, Wisconsin, Pennsylvania, North Carolina and Colorado – voting interest rose by 11 points among Democrats over the past four years, while it only rose by 3 points among Republicans.

GRAPHIC: A head start for the Democrats – here

To be sure, a lot can happen in the next seven months to change the public’s interest in voting. The coronavirus pandemic has disproportionately hit Democratic-leaning urban communities, and it is unclear how a continuing, or resurgent virus will affect turnout in November.

So far, people who support Trump are just as likely to be discouraged from voting during the coronavirus outbreak as those who oppose him, with the percentage of likely voters dropping equally, 8 percentage points each, Reuters/Ipsos polling from March shows.

“All the conventional wisdom and research suggests that (Trump) is in very big trouble,” said Maria Krupenkin, a political science professor at Boston College.

“But that same research also said he was in a bad position before the 2016 election” and Trump still won, Krupenkin said, referring to opinion polls that showed Democrat Hillary Clinton with a lead in the final few weeks before the vote.

GRAPHIC: Calendar of each state’s Democratic nominating contest and its allocated delegates – here

The rise in political enthusiasm was on display in the Democratic presidential nominating contests this year. Turnout in many states such as Michigan, Virginia and South Carolina surpassed previous highs set in 2008, when Barack Obama made his

historic run for the presidency.

In state after state, large majorities of Democratic primary voters – around 60% – said they were “angry” with the Trump administration, while 30% said they were “dissatisfied,” according to exit polls by Edison Research. Most of them said they voted for a candidate who they thought could beat Trump.

The intensity of Democratic political engagement is part of a broader, tribal mentality of “negative partisanship” that has been increasingly motivating voters for a half century, said Steven Webster, a political scientist at Washington University in St. Louis.

That anger runs both ways, Webster added, saying Trump was very capable of generating enough interest among Republicans over the next several months to nullify any Democratic advantage.

Tim Murtaugh, a spokesman for Trump’s 2020 re-election campaign, noted strong turnout for the president at state Republican primaries this year even though he did not have competition.

“President Trump’s supporters would run through a brick wall to vote for him,” Murtaugh said in an emailed statement to Reuters.

Andrew Bates, a spokesman for Biden’s campaign, said he expected this week’s endorsements by Obama, under whom Biden served as vice president, and Senator Bernie Sanders, his former rival for the nomination, to further energize Democrats.

Another sign of Democratic enthusiasm came from Wisconsin where liberal judge Jill Karofsky scored an upset victory over conservative, Trump-backed incumbent Daniel Kelly in a state Supreme Court election in which she won some counties that voted for Trump in 2016.

Milwaukee’s Janine Hedges, 50, was among thousands who waited in line to vote last week in Wisconsin, which also held a Democratic presidential primary. She cast her ballot for Sanders, who has since suspended his campaign and endorsed Biden. In November, she is ready to wait in line again – for Biden – regardless of the coronavirus.

“We just can’t do four more years of this,” she said. “Even though he is not my first choice, Biden is somebody who has a more benevolent side to him. We need that.”