WASHINGTON (Reuters) – At any other time, a divisive U.S. president dealing with a national crisis that is causing severe economic dislocation might bring throngs of demonstrators to the streets of Washington and state capitals across the country. 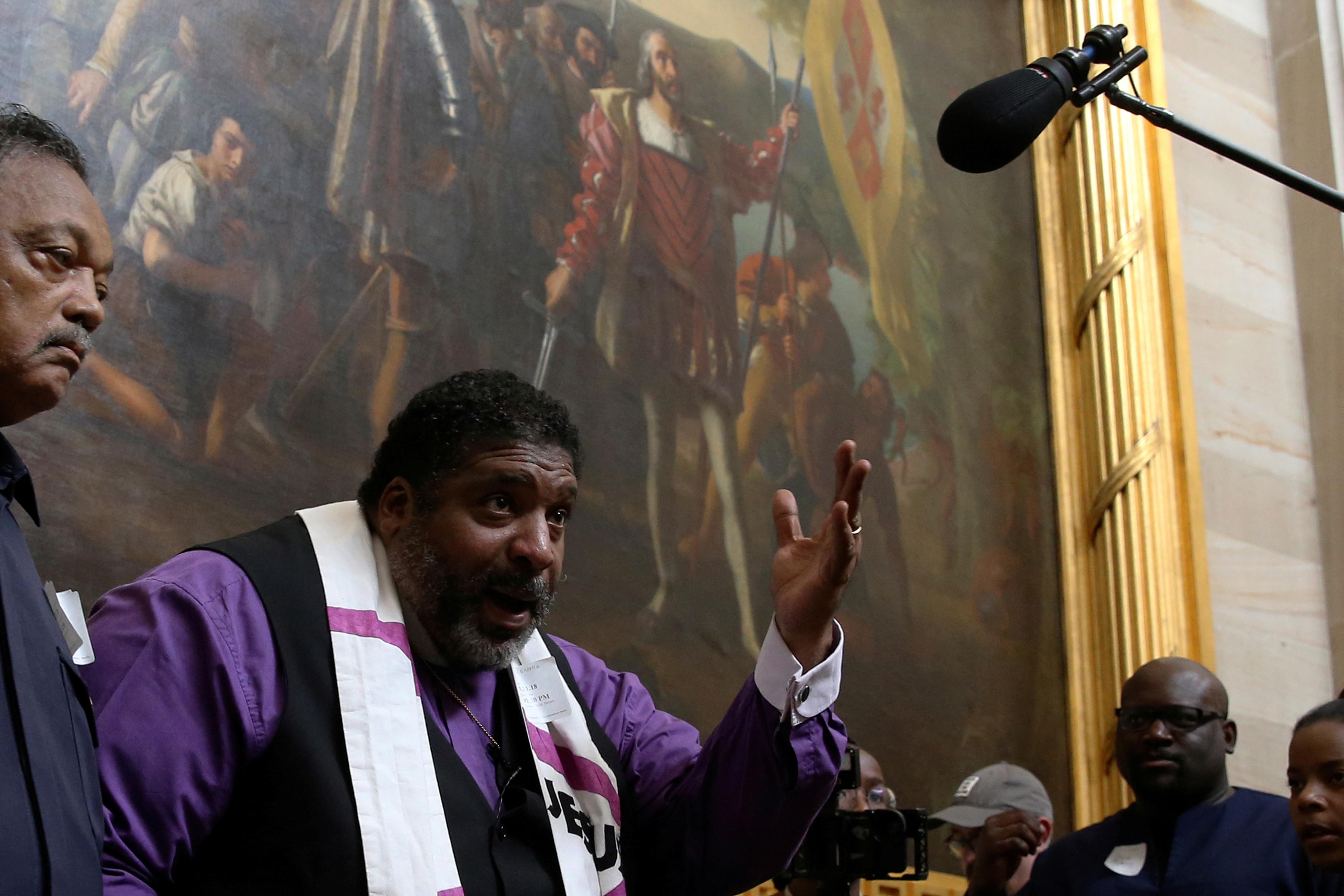 But the spread of the novel coronavirus, which had killed more than 23,560 people in the United States and infected 584,293 as of Monday night and shut down all but essential travel and businesses, has made physical protests nearly impossible.

But their impact may be limited, experts say.

The Poor People’s Campaign, which is demanding that the government’s $2.3 trillion coronavirus relief package better serve poor and low-income people, has converted a planned June 20 march in Washington into an online gathering on that date.

“What we’ve got to do is take everything we had planned to do in the street and do it through social media,” the Rev. William Barber, the campaign co-chair, told Reuters.

“We’re going to give a platform to all of these frontline essential workers who are not being treated like they’re essential,” he said, adding the campaign was gathering advice from film producers and other experts on how to tell stories at the event.

Health Care Voter, which is pushing to preserve the Affordable Care Act, popularly known as Obamacare, and lower prescription drug costs, had initially planned to do a bus tour in March and April, stopping in 30 cities from California to Maine.

“People are at home, honestly, and they want to be able to have these conversations,” said Enobakhare. “People are looking at ways to interact.”

March for Science, a grassroots movement that holds Earth Day rallies each year, has canceled its April street protests for virtual forums using videoconferencing app Zoom and Facebook Live to interview experts about the pandemic and public policy.

Kyle Herrig, president of Accountable.US, said the anti-corruption watchdog group had shifted much of its work to research the federal government’s coronavirus bailouts for big business but that it was challenging to get information out in a news environment dominated by the coronavirus pandemic.

Color of Change President Rashad Robinson said the civil rights group was dealing with the rush of news by ramping up spending on Facebook and Google ads and developing media partnerships.

While young activists may adapt well to moving their campaigns online, their efforts may be less effective than actual street protests, said Dana Fisher, a professor of sociology at the University of Maryland, whose research focuses on activism.

“Large-scale protest events are opportunities to create collective identity for the people participating and to extend the constituency,” Fisher said.

Past in-person rallies against the Trump administration had that aim in mind rather than hoping the president might look out of the White House and change his policy, she said.

Some physical protests are still happening, but in new ways.

National Nurses United, which has 185,000 members, is pushing for Congress to get nurses proper personal protective equipment with a text campaign and protests at hospitals, said Malinda Markowitz, one of the presidents of the California Nurses Association affiliate.

“We have to make sure that we just have a very small group of nurses and they’re 6 feet (1.8 m) apart when they’re out there,” she said.

Barbara Suarez Galeano, organizing director for Detention Watch Network, a coalition of groups working to abolish immigration detention, said the network had been signing petitions and performing call-ins and “honking actions.” Last week in Chicago, people drove to the U.S. Immigration and Customs Enforcement building, the juvenile prison and finally the county jail, where more than 150 cars gathered to circle the building.

“There’s a lot of ways to be disruptive and still be visible,” said Suarez Galeano.

“The huge volume of petitions being created right now speaks to the urgency, concern and anxiety that millions of Americans feel as the COVID-19 pandemic dominates our day-to-day lives,” said Michael Jones, managing director of campaigns at Change.org.