It’s not hope or change. It’s not making anything great. It’s just about making it through.

ATLANTA — The masks, when used, can muffle the dueling chants of a live-action partisan clash. But the messages of this election season still have a way of carrying.

“No more years!” anti-Trump locals shouted at his supporters this past week in Atlanta, where a Joe Biden appearance had lured both camps to a patch of grass between a gas station and a creek. 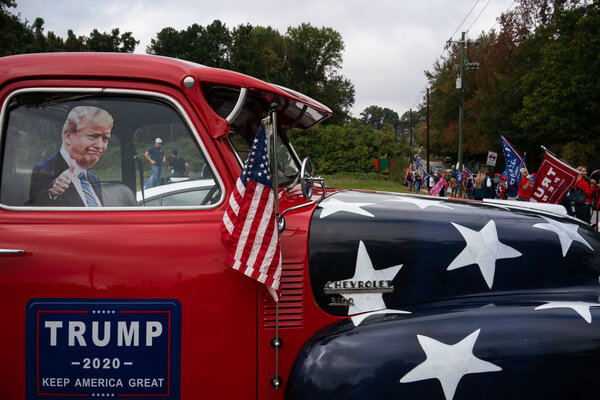 In the course of human events that should probably be taking place virtually this year, in a house so divided that talk of jailing opponents registers as typical fare, in a country asking not what can be done, exactly, but whether anything can at this point, an election is happening on Tuesday.

It is not a hope-and-change kind of year. It is not a moment for being made great again.

Instead, a tour of these final, furious campaign days makes clear that the abiding theme of 2020 is something like survival: getting to 2021 in one piece, individually and collectively.

“At this point, civil war is one bad joke away from happening,” said Jorge Puertas, 21, ducking the rain outside an early-voting site in Hialeah, Fla. “One misunderstanding.”

By the dismal standards of the times, the election’s very arrival can feel like a feat: Here is a date transpiring as scheduled, unmoved by a president who floated delays that he lacked the authority to impose. Here is a national appointment kept.

It is merely everything else that seems different, especially to the comparative few absorbing it all at close range.

On one side, campaign rallies have often been reduced to car-bound honk-fests, for epidemiology’s sake. On the other, they are undimmed — and discouraged by public health authorities.

Taken together, these last campaign snapshots can double as a sort of rolling testament to national contradiction, rendered often in dizzying succession: the swagger and the nihilism, the faith and the faithlessness (“Jesus 2020: Our Only Hope” is a popular sign choice), the blithe invocation of outright fracture.

“Guillotine 2020,” read another sign displayed on a West Philadelphia porch recently, among the wind chimes and planters. “No More Presidents.”

Mr. Puertas, who said he worked for a local Democratic group and cast his ballot for President Trump anyway to avoid disappointing his grandfather, described his inaugural presidential voting experience like this: “It’s almost like picking your first alcohol. You know it’s not good for you, you know you’re going to feel bad in the morning. But you’ve still got to make that choice at one point or another.”