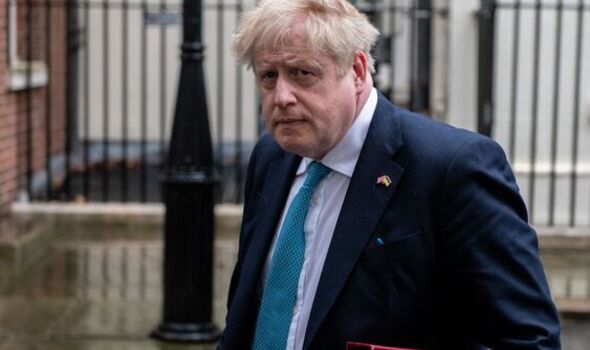 The former prime minister hit out as campaigners said UK taxpayers should stump up £1trillion to help out. But his intervention puts him on a collision course with leader Rishi Sunak.

Downing Street has backed an agreement to discuss payments for countries affected by climate-related disasters.

The revelations came at the COP27 summit in Sharm el-Sheikh, Egypt, where both Tory rivals are present.

Mr Johnson said that net zero carbon emissions would have to be achieved through investment from the private sector in partnership with the international community, rather than through taxpayers in western countries.

He said: “Two hundred years ago, we started it all and there’s no question that, per capita, people in the UK have put out an awful lot of carbon into the atmosphere.”

“But what we cannot do is, you know, make up for that with some kind of reparations. We simply do not have the financial resources — and no country could.”

“The best way to fix this is not to look backwards and try to tot up some bill for loss and damage that the UK or other countries have done, but try to look at what the UK can do to help to take countries forward and help them achieve the carbon reductions and green technologies they need.”

He said: “No, I don’t think it’s a helpful way to look at it. You know, we have a challenge now and it’s a global challenge today.”

“But I personally think it’s very unhelpful to delve back into history and start a sort of blame game.”

“It’s the wrong way to look at it. But there is an obligation on the wealthier countries of the world to come up with that climate change finance. The UK has led the way on that.”

Mr Sunak made no mention of reparations during a speech at the summit yesterday.

But Downing Street insisted the UK was already helping countries.

The Prime Minister’s official spokesman said: “We are helping countries across the world deal with the impacts of climate change.

“We recognise the existential threat it poses to countries around the world, from flooding to drought, and that’s why we have made a commitment to these countries to support them on that front.”

The UK is tripling funding for climate adaptation from £500million to £1.5billion in 2025, the spokesman said.

The PM said in his national statement at the COP27 summit that he believes the world can deliver on its climate promises.

He told the conference hall: “When Her late Majesty Queen Elizabeth II addressed COP26 last year, she reflected how history has shown that when nations come together in common cause, there is always room for hope. I believe we found room for hope in Glasgow.”

“With one last chance to create a plan that would limit global temperature rises to 1.5 degrees, we made the promises to keep that goal within reach. And the question today is this: Can we summon the collective will to deliver? I believe we can.”

He said: “We’re accepting the principle there’s a discussion to be had about this at COP27. “

“We industrialised first and we appreciate the rest of the world needs to be able to bring themselves along as well.”

Discussions about “loss and damage” compensation payments to countries suffering the impacts of climate change are on the summit’s agenda for the first time.

The charity War on Want said a £1trillion sum for reparations reflects the damage done to the planet by the UK burning fossil fuels to power our economy.

The group said that as the UK’s share of the total amount of greenhouse gas produced by burning
fossil fuel is around 3.5 percent, £1trillion would reflect the cost of removing that carbon.

Asad Rehman, of War on Want, said: “The UK was able to industrialise and take resources from the rest of the world and power its economy by burning fossil fuels.”

“This is morally the right thing to do. The UK should step up and accept the responsibility.”

Britain, as the first country to industrialise, has historically been the fifth biggest emitter, Mr Rehman claimed.