Mr Johnson is also privately urging Conservative MPs to get behind his successor Liz Truss in order to prevent Labour from winning the next general election. Chancellor of the Duchy of Lancaster Nadhim Zahawi, who served as Education Secretary and Chancellor in Mr Johnson’s Cabinet, said he could not see any way he could return.

He said: “No I can’t. I think the previous prime minister is rightly telling anyone who’s willing to listen…telling all colleagues to get behind Liz because division will cause delay.

“Delay is our enemy, and ultimately defeat to Keir Starmer.”

Talk of a shock return for Mr Johnson has emerged amongst rebellious Tory MPs in recent days. 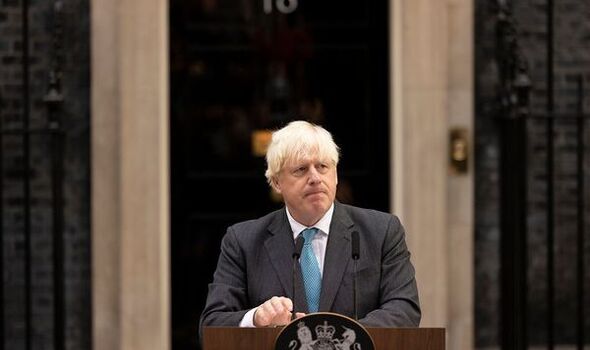 Others have been spooked by opinion polls that have shown Labour enjoying its biggest lead in 20 years.

However, former Culture Secretary Nadine Dorries, one of the few senior ministers to stay loyal to Mr Johnson to the end of his premiership, said she thought a return was “highly” unlikely.

She said: “I have been in politics a long time.

“I don’t rule anything out.

“But I would say it [a comeback by Mr Johnson] is highly, extremely unlikely.”

The remarks by senior Johnson loyalists will be seen as an attempt to quash talk from the backbenchers about the former London Mayor returning as Prime Minister before the the next general election.

However, some MPs reportedly believe that Mr Johnson’s charisma is the only thing that could save them from a landslide defeat in the next general election.

A former Cabinet minister told the Daily Telegraph that some MPs in Red Wall seats in the north of England, which are particularly vulnerable to defeat, were already talking about a change of leadership.

Speaking to the Mail on Sunday, one Conservative MP said that if Labour still has a 20 point opinion poll lead then colleagues will move to oust Ms Truss.

They said: “It will have to be Boris Johnson.

“He will be the big bazooka we will need and that’s what most of the Red Wall thinks.”

However, a friend of Mr Johnson told the Mail on Sunday that the former Spectator editor is enjoying his freedom away from Downing Street.

They said: “He is painting, reading, writing, playing tennis and even having a try at golf.

“He looks better – getting plenty of fresh air – and is back to his old self.”