Home » Politics » Belfast riots: What is happening in Belfast? Is it connected to Brexit?

During the most recent spate of rioting in Belfast on Wednesday, police were attacked, a bus was burned and petrol bombs thrown. More than 50 police officers have been injured in the violence since the end of last month, with the Police Service of Northern Ireland (PSNI) Assistant Chief Constable Jonathan Roberts saying it was likely paramilitary organisations were involved in the disorder.

On Wednesday, the police said a number of officers were injured at an interface between loyalist and nationalist areas.

Ch Const Roberts said several hundred people on each side were throwing petrol bombs in both directions in the loyalist Shankill Road and the nationalist Springfield Road.

Officers were called in from other parts of Northern Ireland to help control the rioting.

Following an emergency meeting of the NI Executive, a joint statement was issued from ministers condemning the violence, saying the group was “gravely concerned by the scenes we have all witnessed on our streets over the last week”.

However, despite all of Northern Ireland’s main political parties condemning the disorder, they are divided over its causes. 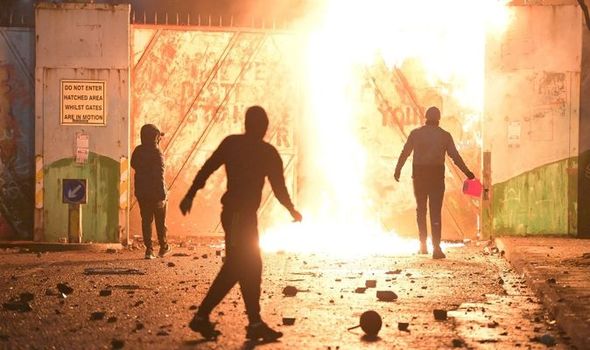 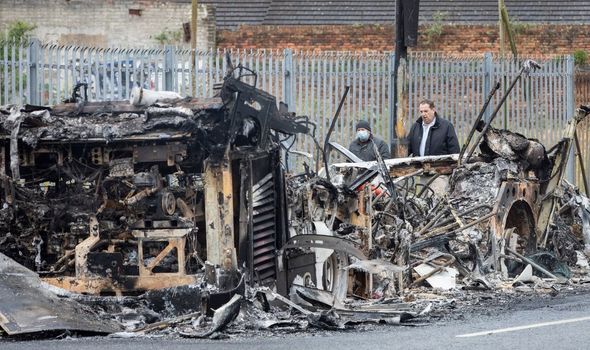 So what is behind the riots?

The violence is thought to be rooted in a combination of factors, some old and some new.

Brexit does play a part, with anger over the new Irish Sea border protocol brewing for months and the streets of loyalist areas plastered with graffiti demonstrating that.

Under the terms of the NI Protocol, which came into effect in January, Northern Ireland remains in the EU’s Single Market for goods, while the rest of the UK has left

Loyalist communities are growing increasingly concerned about how differently Northern Ireland is now being treated from the rest of the UK. 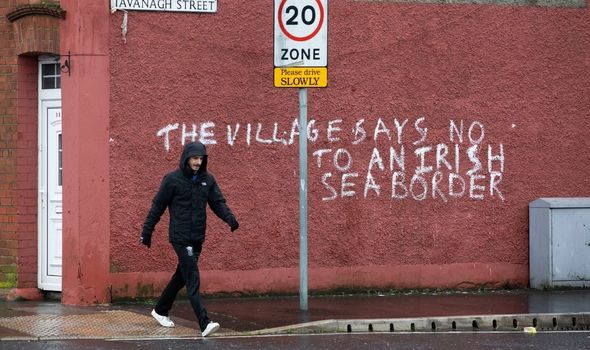 This risks inflaming old tensions smoothed out in the Good Friday Agreement.

But there are other issues at play, too.

There is a lot of anger over the attendance of Sinn Féin politicians at a funeral of a former IRA leader last summer which appeared to show no regard for Covid-19 rules.

Some of Sinn Féin’s most senior politicians attended the funeral when many in the country were missing the funerals of their loved ones due to restrictions.

Some loyalists have accused the PSNI of “two-tier policing”, treating communities differently.

Last week, a decision was made not to prosecute senior Sinn Féin members who attended the funeral.

On top of this, there are reports of more localised issues too.

Some reports have shown loyalist paramilitaries have been subject to a series of raids and arrests for criminal activities. 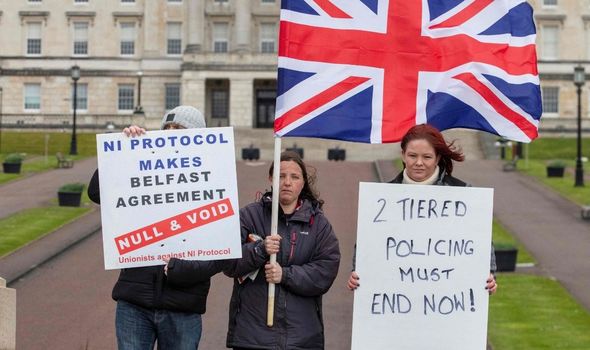 Police believe in some areas these are the figures in the background helping to encourage the violence.

The statement issued by the NI Executive on Thursday said: “We are gravely concerned by the scenes we have all witnessed on our streets over the last week, including those at the Lanark Way interface last night.

“Attacks on police officers, public services and communities are deplorable and they must stop.

“Destruction, violence and the threat of violence are completely unacceptable and unjustifiable, no matter what concerns may exist in communities.

“Those who would seek to use and abuse our children and young people to carry out these attacks have no place in our society.”